Abel Ferrara’s 1992 masterpiece “Bad Lieutenant” is a howl of anguish from the gutter. It’s a movie of wall-to-wall depravity and profound spiritual longing, at once both one of the dirtiest and most deeply religious pictures I’ve ever seen.

The film gets a rare 35mm screening in all its uncut, NC-17 glory this Friday night as part of the Museum of Fine Arts’ excellent “On the Fringe: Indie Film in the ‘90s” series and considering the byzantine rights issues that have cursed the film with various video versions, this might be your only chance to see Ferrara’s original, uncompromised vision.

As a teenage film buff, I had a long-standing policy to go see any movie with Harvey Keitel in it, and I’d been reading about the scandalous “Bad Lieutenant” for months before it finally opened at the old Nickelodeon cinema in Kenmore square, perversely enough on Valentine’s Day, 1993. Perhaps even more perversely, I ran into an ex-girlfriend in line to see the movie with her new beau. I didn’t see them there when the lights came up, but then a lot of people had walked out before the closing credits rolled that afternoon. (Twenty-five years later it still makes me smile thinking about what a terrible date those two must’ve had.)

A snapshot of pre-Giuliani New York City crumbling under the crack epidemic, the film stars Keitel as the unnamed title cop — boozing and snorting his way through crime scenes while calling in increasingly outrageous bets to a mobbed-up bookie. There’s not a vice in which this guy doesn’t revel, whether drunkenly wallowing around with hookers or nodding off in a seedy kitchen shooting gallery. Occasionally he wakes up on the living room couch and receives scornful stares from a family that stopped speaking to him ages ago.

A nun is violently raped on the altar of a church in Spanish Harlem, sodomized with a crucifix by two young boys from the neighborhood parochial school. But she refuses to identify her attackers to the police, saying that she has already forgiven them. This act of grace sends the lapsed Catholic lieutenant into even more of a tailspin, confounded by her compassion and consumed with his own self-hating rage. The movie mutates into a sleazy street-corner version of a passion play, complete with a Gethsemane sequence inside the desecrated church and a last supper taking place at a crack house. This is all probably blasphemous but it’s also agonizingly sincere, the work of genuinely tortured artists trying to make sense of a fallen world.

Keitel turns in one of those once-in-a-generation performances similar to Marlon Brando in “Last Tango in Paris,” Robert De Niro in “Raging Bull” and Daniel Day-Lewis in “There Will Be Blood” insofar as that it feels like the actor is leaving their entrails smeared all over the screen. Friends of Keitel told New York Magazine that he put his own substance abuse struggles and a recent, bitter breakup with wife Lorraine Bracco into “Bad Lieutenant,” using the movie as something like an exorcism. One of the most notorious moments finds the actor stumbling fully, frontally nude around a prostitute’s apartment while crying and squealing like a wounded dog. He’s literally letting it all hang out.

Ferrara does his best not to sensationalize this already sordid material. Shot in the style of Italian neorealist pictures from the 1950s and '60s (Pier Paolo Pasolini’s “The Gospel According to St. Matthew” was obviously a big influence), “Bad Lieutenant” eschews the flashy camerawork popular in indie movies of its era in favor of long, drawn-out takes that drag on in real time. Throughout the film, Keitel’s character loses a small fortune betting on the Dodgers as the Mets miraculously bounce back from a three-game deficit in the NLCS. I don’t think any film has better captured the grinding, slow-motion agony of a losing baseball game, with extended shots of the actor staring slack-jawed at the television in seedy bars as strikes glacially add up into outs.

The original soundtrack featured Schoolly D’s blisteringly obscene “Signifying Rapper” four times throughout the film, providing an aggressive aural undercurrent to the proceedings and a constant mantra of profanity that sounded like the ravings of the title character’s subconscious. Alas, Led Zeppelin sued in 1994 over the song’s lifted riff from their “Kashmir” and forced its removal from subsequent video versions of the film.

The irony of a band famous for stealing blues songs initiating such an action was not lost on Ferrara. “I'll strangle that c------ker Jimmy Page,” he said in a 2002 interview with Scott Tobias of The A.V. Club. “As if every f---ing lick that guy ever played didn't come off a Robert Johnson album.”

I hung on to my original VHS copy because I never could get used to seeing the movie without that Schoolly D song. It felt slightly neutered somehow, and Ferrara’s stubborn refusal to put other music in its place throws off the pacing a bit. Four years later, adding insult to injury, Jimmy Page and Puff Daddy used that precious “Kashmir” riff on a knockoff single for the soundtrack to Roland Emmerich’s atrocious remake of “Godzilla.” 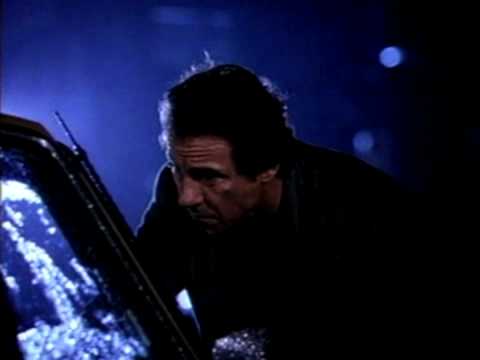 Blockbuster Video and cable television required an R-rated cut of the film, for which so much footage was removed Ferrara had to go back and add scenes from the editing room floor in order to bring the movie back up to feature length. One night, I caught some of it on the Sundance TV channel and for a good while legitimately had no idea what movie I was watching.

“Vampires are lucky, they can feed on others. We gotta eat away at ourselves,” says the film’s screenwriter Zoë Lund in a scene where she’s shooting heroin with Keitel. Lund starred in Ferrara’s 1981 cult classic “Ms .45” as a teenage rape victim turned vigilante, and was in many ways a muse for his gutbucket ecclesiasticism. “We gotta eat away at ourselves till there's nothing left but appetite,” she slurs in the closest thing this movie has to a thesis statement. It is only from there that the unredeemable lieutenant can stagger toward something like grace.