It's lunchtime at Catalyst, an upscale restaurant where a burger and fries cost $16. And the cavernous space in the Kendall Square area of Cambridge is packed, every table taken.

"Look around," I ask my seasoned guide, Jeff Krasner. "What are we seeing?"

"Well," he replies, "we're seeing the convergence of tremendous intellect and a great deal of money."

Krasner used to cover biotech for the Boston Globe, and now has his own biotech communications company. I ask him to break down the who's who of biotech, a field that can look intimidatingly esoteric to outsiders. Turns out he's really good at classifying.

"The three tribes of Kendall Square are: academics and scientists; entrepreneurs; and the venture capitalists who fund them," he says. "And each of these are little subcultures unto themselves. They all have their own dress codes, and they all have their own way of speaking. And they like to get together and start life science companies."

He looks around at the Kendall Square crowd, inhabitants of what's widely considered the densest big cluster of biotech in the world. The Boston-area's booming biotech sector, with its tens of thousands of workers at the intersection of science and business, is creating a new, signature-Boston subculture.

But how to read this new breed of Bostonians? Krasner focuses on a long table nearby.

"Here we see an elderly gentleman with a white beard," he says, "and he's surrounded by one, two, three — seven people who are all in their 20s or early 30s. He's probably a senior academic who has his own lab."

And how would you be able to tell who's a venture capitalist?

"Well, venture capitalists usually wear fancy shoes and jackets, sometimes French cuffs, never a tie. Just never a tie," Krasner says. "If you see somebody wearing a tie, they're trying to get funding for their company. They're pitching!" 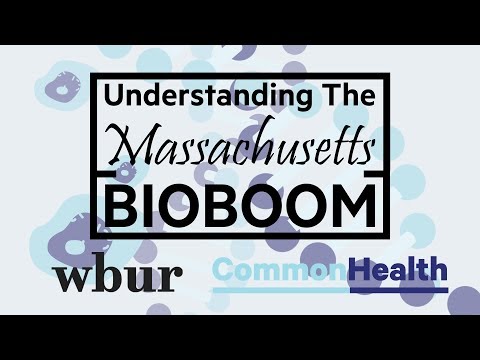 Of course, as Krasner explains, a person can belong to more than one tribe. I see that intermixing in Richard Young, an MIT biology professor at the Whitehead Institute, who is seeing a big new wave of money lifting up Boston-area biotech.

"It's pretty crazy," Young told me recently, "when I can get up one day, talk to a graduate student about an idea, by lunchtime be having a conversation with a venture capitalist, and by the end of the day I'm being asked to come to a meeting because somebody wants to start a company around that idea."

So he's an academic and an entrepreneur — surrounded by others.

"I just find it astonishing that I can't walk more than a couple of blocks without running into a CEO of a major pharma, a Nobel laureate who's leading a field in biology or physics," he said. "Literally just two blocks!"

Hobnobbing with CEOs, Nobel winners -- if this were old Boston, I'd say Young seems to have Brahmin status. But what is the social ladder here in this new Boston, and how do you climb it?

"The Pollyanna would say the only thing in the hierarchy that matters is great science," says Travis McCready, who leads the Massachusetts Life Sciences Center, the quasi-state agency that invests hundreds of millions of dollars into the sector. "But that is totally and completely naive. We are humans and we do what humans do — we discriminate."

Not in a negative way. McCready means the process of deciding who's more worthy of backing in a field where science needs investment money to move forward.

"Successful serial entrepreneurs are at the top of the list," he says. "Your pedigree matters — under whom did you study? Whose lab did you come out of? Which university did you graduate from? Did you graduate from MIT? Harvard? What was your Ph.D. in? How many publications do you have to your name?"

It's like a social algorithm, McCready says, for status amid competition so intense and energy so high that it's like a vortex sucking in biotech talent from all over the world. One-third of the people who work in Boston-area biotech are immigrants, he says.

"If you take a look at the Greater Boston area 20 years ago and compare it to the demographics today," he says, "my guess is that the international diversity of this city is due and owing to this industry alone."

I see plenty of that diversity at LabCentral, a biotech incubator in Cambridge where more than 50 startups get lab benches and freezer space — and camaraderie in their pressure-cooker field.

"If I explain this to my friends I tell them it's a roller coaster, and once you step on, it just keeps going on," says Kasper Roet, the Dutch co-founder of a company called Quralis that's using stem cells to develop treatments for ALS. "It's incredibly exciting and it's very hard to step away from. So it has hooked me to stay in Boston and get my green card."

I ask Ailis Tweed-Kent what hours she works as an MD who's also the CEO of Cocoon Biotech, a startup that's developing silk to treat eye conditions and more.

"It ranges from 7 a.m. breakfast meetings, to networking events in the evening, to lots of conversations and work that's getting done in-between," she says. "So I tend to work some weekends and nights as well. "

"A fear of not being enough to bring your idea and company to the next level," she says. "You just need to learn how to manage this bipolar disorder: You wake up in the morning and everything is going to be great, and at lunchtime you're being the biggest failure of your life, and at dinner, 'Maybe I'm doing OK, tomorrow I'll worry about something else....' "

On average, though, biotech workers tend to be well-paid: Median salaries run into six figures, and some CEOS of big companies take home millions. But talking to people in biotech, money doesn't sound like the only motivation.

"Biotech is at the heart of the innovation economy here. But what are we innovating for? We're innovating for patients," says Abbie Celniker, a general partner at the venture capital firm Third Rock Ventures, who has been in the biotech industry for more than 30 years — most of its existence.

"We're innovating to create therapeutic approaches that don't exist today and will change the lives of those patients," she says. "That is a big part of the conversation."

And among Boston biotech leaders, you don't see the kind of conspicuous consumption and flagrant classism that Silicon Valley is known for, says Damian Garde, national biotech reporter for STAT.

"I'll often hear whispers, or just hear in passing, the exorbitant displays of wealth that biotech people have. But it's something they kind of keep under wraps," he says. "They're absolutely hanging out on their compounds on the Cape. They're just not tweeting about it."

And it is here to stay.

"Someone described Boston as the center of gravity for the biotech industry," says Johannes Fruehauf, president of LabCentral. "It's like this sun or this black hole in space: If your particle gets attracted to that thing, it will never leave."

But the biotech sector's full impact may take a while to become clear. McCready from the Life Sciences Center offers this provocative thought:

The Massachusetts public school system is already considered the best in the country, "but what we've just done is brought tens of thousands of Type A brilliant scientists from all over the world, put them in a cauldron and asked them to send their kids to our schools. Do you not think that there's going to be a downstream effect...?"

Oh, yes, indeed. In education and many other areas, the culture of biotech will surely affect the broader culture of Boston for many years to come.

And if you're an outsider who wants to speak biotech, you'll find a primer here.