The timing of Jon Meacham’s new book, “The Soul of America: The Battle for Our Better Angels” — No. 4 on The New York Times Nonfiction Bestseller list — has everything to do with President Trump, but as the author points out, “I think Trump’s name appears four times in the book.”

“I thought about doing zero, but I couldn’t with any intellectual honesty,” Meacham continues, over the phone. “I had to say why I’d begun, why I was writing it.”

Meacham, who won a Pulitzer Prize in 2009 for his biography of Andrew Jackson, dives deeply into America’s proud and not-so-proud past in “The Soul of America.” He writes, among other things, about heroes who were not always so heroic, an ongoing racial animus that simply shifted tactics after the Civil War, and the ugly era when Sen. Joe McCarthy dominated American politics. Meacham writes about the discord that has been a pretty constant presence in America throughout its existence.

“One of the things that I’m proudest of is that I was writing this now, not because of the American president who has always risen to the occasion, but because this one does so rarely,” Meacham says.

If Trump’s surprising ascendency and contentious, confrontational style was the spark for the book, the gist of it wrestles with the country’s conflicted history and what Meacham sees as our innate ability to somehow channel our “better angels.” It’s a term he borrows from Abraham Lincoln, who said, “We are not enemies, but friends. We must not be enemies. Though passion may have strained, it must not break our bonds of affection. The mystic chords of memory will swell when again touched, as surely they will be, by the better angels of our nature.”

Where does Meacham fall, politically? “That’s a great question,” he says. “I have voted for Democrats, I have voted for Republicans, I plan to continue to do so. I’m a Southerner and I grew up believing that Ronald Reagan was a great transformative president. I would have called myself for many years someone on the center-right, but now I think it’d be center-left.”

Meacham, 49, is the former editor of Newsweek, the former executive editor and vice president at Random House and a contributing editor at Time. He’s in the midst of a speaking tour that will take him to the Brattle Theatre in Cambridge for a sold-out appearance on Monday, June 18.

We spoke over the phone between his flights from San Diego to Birmingham. Here's our conversation, lightly edited:

Jim Sullivan: I saw you on “Real Time with Bill Maher” last month and felt this little twinge of optimism and did so again reading “The Soul of America.” But then I watched Maher the other night and the gloom and anger came back — that we are off the rails and there’s no way back on track. So, I pivoted from cynicism to hope and back to cynicism. 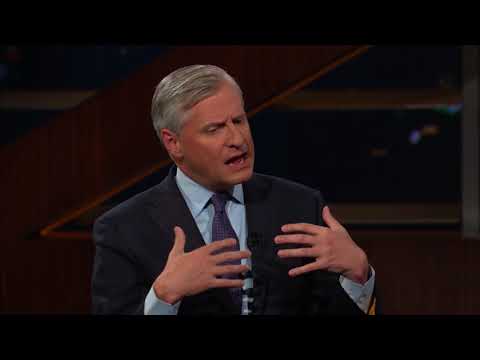 Do you ride that see-saw and did you do so when writing this book?

"Absolutely. My argument isn’t things have been OK in the past so therefore let’s just wait for it all to turn out well. Things have been wrong in the past and we have managed to survive them. What have been the elements that have enabled us to do so and how can we replicate those elements? It’s a wildly unconventional time. My argument is that if you and I had been having this conversation in 1952, we would have been agreeing that Eisenhower wasn’t doing enough to take on McCarthy and he was running roughshod over the Constitution. What could we possibly do? If we were having this conversation 50 years ago today, we would be in a state of numb shock because Sen. Kennedy had just been killed and buried and on the heels of Dr. King being killed. So, my version of what you’re describing is: I decline to accept that Donald Trump is capable of undoing the work of 240 years. But you know what? It’s not getting any better. That’s my see-saw."

In the book, you write: “Every generation tends to think of itself as uniquely challenged and under siege. The questions of the present assume outsize and urgent importance for they are, after all, the questions that shape and suffuse the lives of those living in the moment.”

"And understandably. My whole point here is that history shouldn’t be so lost. It’s not a narcotic, but it can give you a sense of proportion. That is, should you have lit your hair on fire when Trump attacked Prime Minister Trudeau? Probably not. Ten or 15 years ago, if you and I had picked up a copy of the Times or the Globe, the whole paper would have been full of people saying, 'George Bush and Dick Cheney had ruined all our lives forever.' Now, George Bush looks like an international Cicero. My view is it requires proportion. I’m not a professional political operative. If I were, and I had an incentive to have people’s hair on fire, I would have a different view. I worry that the political conversation is like political paintball. The bruise that doesn’t kill. I don’t know what the effect of that is ultimately. I haven’t worked that out yet."

You devote a lot of space to McCarthy It’s not a stretch to note the parallels between McCarthy and Trump. And, of course, that they shared the same lawyer in Roy Cohn. I’m guessing that was an intentional ploy.

"Yeah, you got it. It worked. Thank you. I do believe there’s a great virtue in argument by implication. And I think if this book had been frontal assault on Donald Trump, I don’t think it would have [worked]. I’ve been very gratified people reacted to it the way they have. And I don’t think it would have done so if it had been the case against Donald Trump. I just thought if I could enable readers to make that connection for themselves that it would be more effective rhetorically."

Even people we tend to regard as heroes, Lincoln to FDR, are flawed in your telling, even if they evolved in their thinking.

"It’s entirely my view of biography, which is that if we look at the past just for perfection we’re going to be disappointed. If we look at it simply to make ourselves feel better, we’re not being honest. So, you have to take them for what they were. And if they got to the right side 51 percent of the time, that’s better than I do most of the time. I think I’m more accurately described as a biographer than a historian, really. My whole view of painting these portraits, my whole purpose, is to say flawed people did great things. And given that I only know flawed people, present company included, then that means there is hope. They did it; so we can, too. The idea that they were somehow these heroic figures who were irretrievable, that they were giants who walked the earth. They weren’t giants when they did walk the earth."

Until reading your book, I was unaware of the strength — the resurgency and the numbers of Ku Klux Klan in the mid-1920s — and the fact that it became such a major power within the Democratic party. Racial strife is a big part of your book. What part do you think race has played in the divisiveness we've long faced and face currently?

"Race is a, if not the crucial American dilemma. Our history is inextricably bound up with slavery, with questions of equality, with atoning for our sins toward an entire people. The hope is that we move ever onward toward a world where merit, not skin color, defines us in the public sphere."

Who do you think is reading “The Soul of America?”

"I don’t think it’s got a gazillion pro-Trump readers, although interestingly, my father-in-law who is a Mississippi Fox News guy really liked it and I can’t figure it out. Maybe he didn’t read it."

Did you think about your market when writing this?

"I did and I didn’t. My view was I didn’t want it to be a book about Trump because everybody knows what they think about Trump. My hope was that I could get the people who care about history and its applications. I thought about that more than I did left or right. In my other books, I’m not really sure where the split is between liberal and conservative. I tend to write about people who you would think the right would be very interested in, but if I meet [readers] they’re probably on the left. Does that make sense? The Andrew Jackson book — you’d think that would be Republican, but if I walk into a bookstore somewhere, 70 percent of the crowd is going to be NPR people."

I think in some ways you’re being a contrarian with this book.

"Contrarian? You mean about being optimistic? Oh god, yes, absolutely. Because the committed center-left — well, really the center-right all the way to the left — there’s a tendency on that part of the spectrum, beyond the virulent pro-Trumpers, they want this to be the worst of times because they think that sense of crisis is necessary to fight him off. I haven’t gotten much [criticism], but one criticism that could interestingly be leveled is 'You’re not taking this seriously enough, you don’t understand. Joe McCarthy was never president.' My friend Richard Cohen wrote a column last week about this and it’s an intelligent articulation of this critique. If I’m being contrarian, I’m being contrarian against the view that to act as though this is not 1933 in any way is somehow normalizing him or making him less than a threat than he is."

There's a late musician I like, Vivian Stanshall, who was in the British satirical rock band the Bonzo Dog Doo-Dah Band, and he had this great line: “Pessimism is easy. Optimism is hard because it’s creative.” Your thoughts on that?

"Optimism is hard, not least because it creates accountability. Cynicism and irony leave you in the stands. Hope and optimism force you into the field."

I was wondering if when you were writing this you thought a nice title might be “The Audacity of Hope” and then went, "Oh, wait, taken…”

"Hope is audacious. But I’m happy with my title — I think our essence, our soul, is defined by the perennial struggle between hope and fear."

One last thing: I was a friend of Howard Zinn’s and really liked his book “A People’s History of the United States.” Did his work have an effect on you?

"Oh, yeah, sure. It was in the sense that it’s the clearest exposition of the non-heroic, non-great man view of history. What Zinn’s work does is he pulls the camera back in a hugely effective and illuminating way. I think all of us work in the reframing that he undertook."

Jon Meacham discusses his latest book, “The Soul of America: The Battle for Our Better Angels,” for a sold-out show at the Brattle Theatre on Monday, June 18.