In the kind of bizarre accident of timing that in the past has led to dueling giant astroid movies and competing biographies of Truman Capote, Boston audiences the week can choose between two independent films about the troubled lives of Texas waitresses. But while Andrew Bujalski’s “Support the Girls” and Augustine Frizzell’s “Never Goin’ Back” may overlap in their settings and occupations, the tenor and tones of the films are drastically different and worth a closer look. After all, experts say you can tell everything about a first date by the way they treat the waitstaff.

“Support the Girls” stars Regina Hall as Lisa, the put-upon general manager of Double Whammies, a Hooters-knockoff in Dallas with a motto of “boobs, brews and big screens.” It’s there she plays den mother to a disappointingly vague assortment of young women who report to work in crop tops, short-shorts and WonderBras. Lisa’s constantly coaching them how to stay just an inch or two on the right side of sleazy, thus preserving the oft-repeated, all-important assertion that this is a family-friendly establishment. 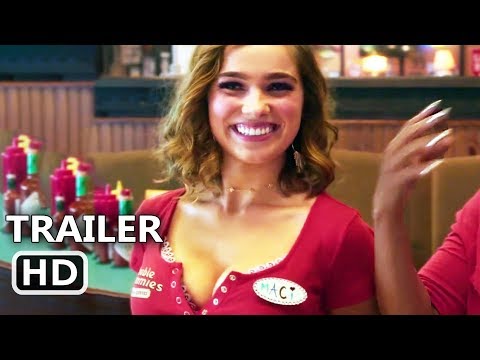 Lisa is having a no good, very bad day — beginning with a botched break-in before opening, continuing through the dissolution of her marriage during the lunch rush and then a cable outage right before the evening’s big televised UFC match. She’s had just about enough of being berated by the place’s piggish owner (James Le Gros) and is particularly fed up with his “rainbow directive” to schedule no more than one waitress of color per shift. Her spirits are buoyed only by sly second-in-command Danyelle (Shayna McHayle) and the perpetually sunny Marci (Haley Lu Richardson, in a role a thousand miles removed from her sullen architecture student in last year’s wonderful “Columbus”).

The Boston-bred Bujalski moved down south a few years back and is obviously fascinated by the hypocrisy of these pandering places and their weirdly sanitized sexuality. He’s even included the character of a trainee (Dylan Gelula) who keeps taking things too far, which is not an accusation you’re ever going to hear leveled at this timid, tepid film. “Support the Girls” is full of broad comic conceits that the direction sheepishly undercuts in search of a psychological realism that the screenplay isn’t specific enough to provide. It’s a curiously muted affair, with the large, artificial setups and phony plot hooks of a conventional studio comedy petering out into the disappointments and anti-climaxes of a mopey indie drama.

I understand this might be part of the point, as Bujalski’s previous picture — 2015’s delightful “Results” — tinkered around under the hood of its rom-com engine to rejigger the genre in refreshing ways. But “Support the Girls” isn’t sharply written or lived-in enough to support his attempted subversions. (It’s not just that the day-to-day operations of Double Whammies will be laughably unconvincing to anyone who’s ever worked in a restaurant, I doubt they’ll fool anyone who’s ordered a meal at one.)

The actresses are all appealing but their roles are awfully thin. These are the most tediously well-behaved young waitresses I’ve ever encountered, and how ironic that a movie railing against the objectification of women can’t come up with anything for them to do besides be objects of our pity. Personally, I think Bujalski also blows it by making Double Whammies a standalone small business and not a chain. He misses the chance to skewer the insidious corporate culture behind places like Hooters, instead offering Le Gros as a lip-smacking, one-dimensional villain whose eventual comeuppance is as unsatisfying as it is poorly staged. The whole thing falls so flat I never even noticed that the title is a joke about bras.

There’s nothing timid or well-behaved about “Never Goin’ Back,” writer-director Augustine Frizzell’s screamingly funny debut feature about two high school dropout diner waitresses in Fort Worth scrambling to make rent during a week full of bad decisions and worse luck. Secreted into a single area theater last week on an abbreviated schedule with zero promotion, the movie wasn’t so much released as it escaped — and I’m sure the shabby treatment by its distributor will become part of this rambunctious entertainment’s eventual cult legend. 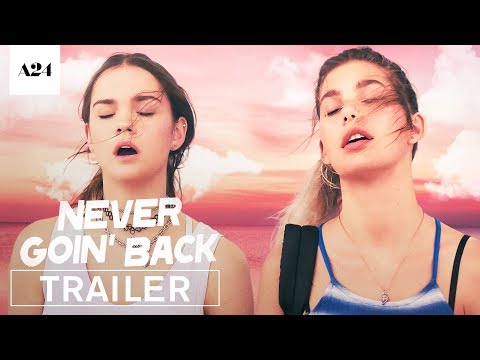 Maia Mitchell and Camila Morrone star as Angela and Jessie, two cheerfully hedonistic, unsupervised 16-year-olds sharing a bedroom in a run-down dump where the latter’s older brother is attempting to start a new career as a pot dealer. (It’s not going well.) Angela has impulsively blown all their rent money on an upcoming birthday trip for the two to Galveston, necessitating that they work double-shifts for the rest of the week at their local, soul-sucking pancake house or face a hasty eviction.

The swift and spectacular fashion in which things do not go according to plan for Angela and Jessie shall not be revealed here, save to say that at the film’s IFFBoston premiere my ARTery colleague Andy Crump worried I was going to injure myself laughing. Frizzell (granddaughter of country music legend Lefty Frizzell and wife of filmmaker David Lowery) has a brash, gloriously rude sense of humor and fearlessly marches our heroines through the raunchy, druggy territory typically reserved for boys only in movies like “The Hangover” and “Superbad.”

Frizzell has hinted that the film has autobiographical elements, and there is indeed a satisfying specificity to this neighborhood’s barren bus stops and the never-ending cold war between servers and hostesses at the restaurant. (It’s easy to identify with their manager, who knows he should probably fire these gals yet keeps them around anyway because their antics are so amusing.) But what moves you is the unshakable bond between Angela and Jessie, always looking out for each other in a milieu rife with gross, deadbeat guys and drug-addled mishaps. It’s like “Beaches,” but with bumps of blow and weed butter.

There’s a built-in sadness to the smallness of this world — hell, even their dream getaway is only Galveston — but Frizzell never dwells on the downbeat, nor does she judge her heroines’ behavior. The movie’s grungy authenticity feels like it comes from someplace real, as opposed to Bujalski’s more academic exercise, which can’t help but come off as uptight and somewhat condescending in comparison. Perhaps it’s the difference between a male filmmaker skittishly handling his female characters with kid gloves and a woman free enough to let them rip.

The gasp-inducing finale of “Never Goin’ Back” pays off about an hour’s worth of constipation gags later with an ever-escalating, scatological set-piece scored to Barry Manilow’s “Mandy” that is both astounding in its grossness and unexpectedly quite tender. These are the girls you’ll want to support.

"Support the Girls" and "Never Goin' Back" are screening at the Kendall Square Cinema.