On a recent afternoon, Sara Porkalob stood alone on a rehearsal stage at the American Repertory Theater’s Oberon in Cambridge, channeling her mother as a young woman at an awkward dinner party. She raised an imaginary wine glass, took a long dramatic pause — and dissolved back into herself with peals of laughter. “Line!” she called.

Porkalob is currently shaping and rehearsing “Dragon Mama,” a one-woman play based on her mother’s experiences growing up in Washington state and striking out for Alaska. The play has its world premiere this month at Oberon.

"Dragon Mama" is part two of Porkalob’s three-part series “Dragon Cycle,” an excavation of her family history. It’s about "three generations of my Filipino-American, gangster karaoke-singing, queer, poor, amazing family," Porkalob says. The cycle started with “Dragon Lady,” a cabaret show about her grandmother. “Dragon Mama” spans some 20 years of her mother’s life. “Dragon Baby,” the last, still-to-come play in the cycle, will focus on Porkalob herself.

"Dragon Lady" came to Oberon in 2018, and will reprise this month alongside the opening of "Dragon Mama." In both plays, Porkalob portrays dozens of characters in rapid succession, toggling between several perspectives on any given situation. In voice and posture, she inhabits her aunts and uncles, her grandparents, her mothers, herself. “Why I'm able to do that is because I know all of these people very, very well,” she says. “Not only that, these people have made me who I am. [That’s why] I'm able to portray them in nuance, complexity, in joy and despair.”

The plays are structured as a series of vignettes. Time moves fluidly between remembering in the present, and reliving the past. Through spoken words and physical gestures, Porkalob shifts the setting from a 1970s nightclub in the Philippines, to a trailer park in Washington, a car ride, a karaoke den. 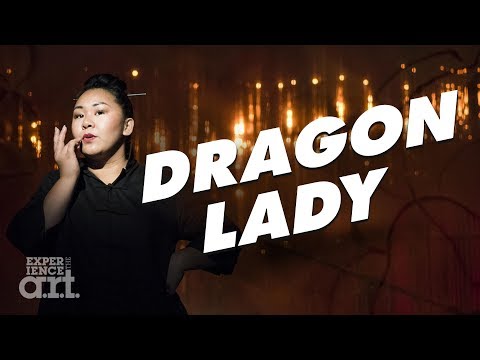 As a performer, Porkalob’s delivery is virtuosic. Her expansive energy and comic timing are impeccable. Andrew Russell, director for both “Dragon Lady” and “Dragon Mama,” says that underpinning her performances are "really smartly structured pieces of great American theater."

"She's written two very different plays that use form and style to demonstrate internal opportunities and external obstacles really smartly," he says. In "Dragon Lady," Porkalob mounts a cabaret show, moving throughout the theater and breaking the fourth wall. "Dragon Mama," he says, takes on a more traditional theatrical structure, almost "in the round," as it confronts generational baggage head-on.

Porkalob, now 30, started writing “Dragon Lady” as a college senior, for a class on solo performance. After taking a class in theater theory, she had an epiphany: “If all of these stories that I've been learning about in college look nothing like me [or] the people that I came from,” she says, “[And] also comment on [them] in a way that I find problematic — racist, sexist, classist, not true, damaging, dehumanizing — then maybe I should write different stories.”

If Porkalob’s stories weren't so funny, they'd be completely tragic. Her 5-year-old aunt learns to physically defend herself from bullies at the trailer park. Her teenage mother tries to hold a family of children together for weeks without food or parents.

But Porkalob has no interest in your pity. In her telling, her family values resourcefulness: As starving kids, their instincts weren’t to beg or steal, but to hustle. They borrowed Boy Scout uniforms and solicited food donations from the fancier parts of town.

While her family lacked resources, she grew up rich in familial love. And her inheritance is “resilience, born out of generations of people just trying to survive ... as single mothers, as children of trauma.”

“My family — they never knew if the next day was going to come, so they went hard [every day],” says Porkalob. “So I'd like to think that it's in my blood system. It's in my genes.”

Diane Paulus, A.R.T.’s artistic director, sees Porkalob’s work as a natural fit for Oberon. “Sara is bold, courageous, unafraid of breaking boundaries, and she builds a relationship with the audience through her work — all of which are values we aspire to at the A.R.T.” The theater recently commissioned “Dragon Baby,” the last play in Dragon Cycle, conceptualized as a 10-person, two-act musical.

“Theater allows audiences to encounter stories that are unlike their own,” Paulus wrote via email. “Sara’s Dragon Cycle offers an illuminating and powerful perspective on what it means to grow up in America.” (Paulus was between London and New York, opening "Waitress" in London’s West End, and directing its ongoing run on Broadway.)

The plays are laced with casual sexism, classism and racism. A trailer park neighbor calls the family savages: “Asians eat cats.” Her grandmother is rejected by her American mother-in-law on first meeting, because “her kind” is just after citizenship. They’re details from Porkalob’s family history that represent a real place and time. But if the audience “came away thinking about -isms, I wouldn't be doing my job,” she says. “Those things influence a person, they aren’t a person.”

Her aim is to tell stories of survival and resilience. Beyond the laughs, she’s playing for empathy and connection. “What could my grandmother have done if those things hadn’t existed?” she wonders. “And look what she did, despite those things.”

In Porkalob’s plays, storytelling is as an act of transformation. She says her plays have been cathartic and healing for her family. She’s taken what's bitter and made it bittersweet.

Since last fall, Porkalob estimates she’s rewritten the first act of “Dragon Mama” eight different times. Each one, she says, has gotten closer to the truth.