When ninth grade humanities teacher Sydney Chaffee decided she wanted to become a teacher, she admits her expectations were wildly idealistic.

"This is the path that was meant for me," she remembered thinking. "I’m going to go in there and I’m going to save all the children."

But those unrealistic expectations — and savior complex — didn't last long.

Like many new teachers, Chaffee struggled through her first year in the classroom at Codman Academy Charter Public School in Dorchester in 2007. She said while all of her papers and lesson plans were in order each day, she had a hard time adjusting to the reality of heading up a classroom: from keeping her students' attention to forming connections.

She learned a lot that year. But the biggest lesson came just a few months after school started. Chaffee — who is white — got into in a seemingly straightforward altercation with 12th grader Tyrell Brewster — who is black.

Chaffee was helping Brewster's younger brother study after school. Tyrell opened the door, came into the classroom and asked what they were doing.

At the time, Chaffee thought the interruption was rude. She thought Brewster should have knocked on the door and said, "Excuse me." That's why she made the split-second decision to ignore him.

"My natural reaction was just to blow up," he said. "I don't remember verbatim what I said, but I was cussing."

"Nothing in my work to become a teacher had prepared me for a moment like this," she said. "We talk a lot about lesson planning. We talk a lot about pedagogy. We don’t really talk about what you do when a student blows up at you."

That night, Chaffee called her boss, Head of School Thabiti Brown, in tears as she shared her side of the story.

Brown had a lot of classroom experience under his belt and had been working at Codman since its founding in 2001. He also had a good relationship with Brewster, and Chaffee's recounting of the story felt out of character for the 17-year-old.

Rather than taking sides, Brown set up a mediation. Chaffee remembered heading into that meeting thinking she was totally in the right and this would be her chance to say something back to Brewster.

But that's not how the meeting went. 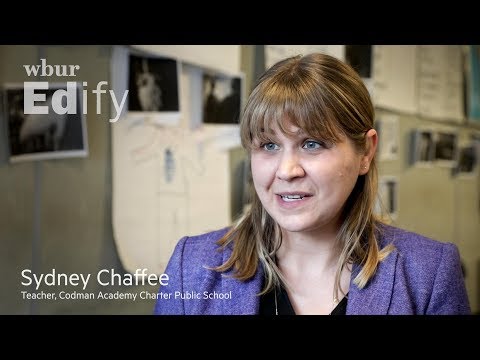 When they got together, Brewster revealed that when Chaffee ignored him, he felt disrespected.

"I think anyone feels disrespected when you are talking to someone clearly and they ignore you," Brewster said. "You just want a response."

But it wasn't just a matter of respect.

What felt like a simple story of "he said/she said" was more complex, particularly when you account for race. Behind a lot of Brewster's frustration in that moment was a feeling that the school he loved was changing into something he didn't recognize.

In 2007, all but one of the 112 students enrolled in Codman were black or latinx. Of the 13 staff: Three were black and the rest were white. When the school opened in 2001, four of the five founding teachers were black.

"I didn’t think much of the staff reflected the student body here," Brewster said. "And at the time there were a lot of staff coming in that were not people of color."

That was unsettling for Brewster. He had attended other schools before enrolling in Codman in 2003. At those schools, learning was a chore and school was not a positive place to be.

"I didn't enjoy those schools because it felt like the teachers were just there to get a check," he said. "It was very hands off and I didn't feel supported."

But Codman Academy felt different. When he got there as a freshman, he felt like learning was fun. When he saw more white teachers being hired at the school, Brewster was concerned.

"I was worried about that shift — that Codman isn't going to be fun anymore," he recalled.

"I didn’t think much of the staff reflected the student body here. And at the time there were a lot of staff coming in that were not people of color."

Hearing that explanation was eye-opening for Chaffee. She realized she had not considered his perspective or the many ways that race factored into how their interaction played out.

"There were layers to that [moment] that I was not critical about because I was so new to it," said Chaffee. "I hadn’t thought about those things. I hadn’t been exposed to those ideas, which is my white privilege in action."

Today, Brewster is back in the halls of Codman Academy, this time as a high school math teacher.

"When Tyrell came back to work here, it was the first thing that I thought of," Chaffee said. “Like, Does he remember when I really messed up? Does he think of me as the ignorant white teacher who doesn’t get it?”

But Brewster didn't hold a grudge. He said his perspective of Chaffee changed a lot over the last 12 years. Now, he thinks of her as a role-model teacher. In fact, that incident has informed how he handles similar situations in his classroom.

"It's helpful to have been through those things. Just because I can speak of it firsthand and the students really respect that," he said.

For Chaffee the incident taught her about patience and consideration of the nuanced ways that racial differences can play into everyday interactions.

"I have a ton of learning that I'm still doing in my growth as a white teacher" she said. "Both in the context of this school, but also in general."