Toni Morrison wakes before the sun. When the first light creeps over the tree line and starts stippling the waves in front of her home, she’s there. “I’m very, very smart early in the day. Later on…? Ehhh,” she grumbles, then laughs.

This glimpse into Morrison’s private world in the new documentary, “Toni Morrison: The Pieces I Am,” could come off as an aside. But from her it sounds like instructions for living. That’s the thing about the globally-revered novelist and intellectual. You want to hold on to every word she says. This film gives you that chance.

Her friend, artist portraitist and the documentary’s director Timothy Greenfield-Sanders, had witnessed Morrison’s disarming effect on people long before he convinced Morrison the time was right for a documentary. In a recent phone interview, he describes how people have waited in line at a book signing, then “when they got in front her, they couldn’t speak.”

But Greenfield-Sanders says he couldn’t let Morrison’s iconic status distract him from the goal of bringing additional complexity to what the public typically knows of his friend. “They immediately think of her Nobel Prize or ‘Beloved.’ I wanted to show how much more there is to her,” he says.

“The Pieces I Am” opens with a collage-in-the-making. Angular pieces of portraits (many taken by Greenfield-Sanders over nearly four decades) layer over paper scraps in bold, bright prints. A young Morrison (born Chloe Wofford) gives way to an older one until today’s 88-year-old remains, her gaze inviting in anyone paying attention.

You can see Mickalene Thomas’ artistry in the poster or get a sense of the overall film in this trailer: 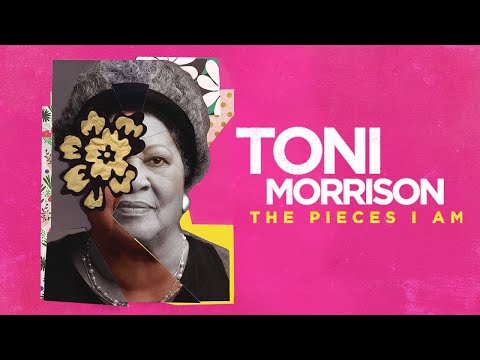 Discussions of how different gazes have influenced Morrison and the interpretations of her work come up throughout the film. In one interview, she piquantly schools Bill Moyers on how the dominance of white and male gazes adds up to American culture’s “master narrative.” She was explaining, as she has many times since, why she celebrates the designation of "black woman writer." "It's richer than being a white male writer because I know more and I've experienced more," she told The New Yorker in 2003. She's an outspoken advocate for other black writers and offers invaluable commentary on the prevalence of American racism — "a profound neurosis that nobody examines for what it is," she told Charlie Rose.

That's why I had to ask Greenfield-Sanders about being white, male and the director of this film. He relays a recent conversation with Morrison about getting that question. He says that he told her, “My answer is pretty much, You trusted me.” And that she said, "I still trust you."

Clips like the one with Moyers or others with Charlie Rose and Dick Cavett come from the '80s and '90s, decades in which Morrison was more likely to grant interviews. In this film she confesses that one part of her doesn’t do documentaries. Greenfield-Sanders understands this split. “I’ve been lucky to know the two of them, the Chloe and the Toni,” he says.

The majority of “The Pieces I Am” unfolds in a combination of contemporary interviews, archival images of black American history (at times potently appearing with racist narration from other footage), and an awesome spectrum of African-American fine art. Each track builds a distinctly edifying story. Greenfield-Sanders films Morrison in the ever-more popular style of direct addresses to the camera. A cadre of her friends and colleagues (Fran Lebowitz, Sonia Sanchez, and Harvard’s Davíd Carrasco among them) direct their gazes slightly off-camera, in the more familiar news interview style. The approach subtly elevates Morrison as the film’s center and also gives the audience the rare feeling of hanging out with their comfortably genius old pal, Toni.

Morrison endears with hints of her own self-doubt — that it took her four novels to call herself a writer instead of “an editor who writes,” that she asked the Nobel Laureate committee to “fax her” her award notification as back-up to the phone call.

Greenfield-Sanders says he started the documentary by constructing 3- to 8-minute vignettes on topics like Morrison’s first novel, “The Bluest Eye” (1970), and her influential yet lesser-known years as a Random House editor. He and his creative team collected more vignettes along the way and kept looking for non-linear ways to string them together, “to not be too cookie cutter. We wanted to figure out a way of intercutting much the way she writes.”

Films about writers face the inherent challenge of turning a largely interior, two-dimensional process into three. I appreciate that Greenfield-Sanders includes Morrison actually writing, her pencil looping along yellow legal pads, as well as snapshots of her editing marks and hand-drawn maps for her complicated novels. (They span more than four centuries one interviewee observes.)

As a further way of breathing life into Morrison’s writing, actor and writer Alexandria Danielle King (who frequently appears in Boston stage productions) has been sifting through some of her favorite character monologues. She’ll perform a curated batch before “Toni Morrison: The Pieces I Am” opens the the 21st annual Roxbury International Film Festival on Thursday, June 20. (The event takes place at Museum of Fine Arts, Boston. Other festival venues include Hibernian Hall, Haley House Bakery Café, Berklee College of Music, and the Bruce C. Bolling Building.)

King says she fell in love with Morrison's work when she read “Jazz” (1992) in college. She’d just added a few of the author’s more recent titles to her summer reading list when RIFF festival founder and director Lisa Simmons called. All she said back was, “Oh my goodness.” As she started choosing passages, King says, “You’re reading things that are incredibly graphic, often brutal brutal things, yet [through] Toni Morrison we find a way forward. We find life.” She doesn’t want to give too much away but promises a mini one-woman show that highlights the “triumphant nature of the human spirit.”

Even if you haven't witnessed that triumph through Morrison's novels or other work, or if some time has passed since you have, "The Pieces I Am" will make you want to pick her books up and start reading. Some documentarians worry about making love letters to their subject. Here's a case where it was the only film to make.