Fabiola Mendez says kids used to tease her growing up for playing the Puerto Rican cuatro. "People would make fun of me and be like, 'That’s such a lame instrument, that’s an instrument for 'viejitos,' for old people," she remembers.

Now, the 23-year-old from Caguas, Puerto Rico, is taking the cuatro places it’s never been. She's even the first student ever to specialize in the cuatro at Berklee College of Music. Mendez hopes to introduce people everywhere to the traditional island instrument that's almost as old as Puerto Rico itself.

Back then, the instrument was just a piece of wood with a hole and four makeshift strings. The cuatro now has 10 strings divided into five pairs. But the way it’s played has changed much more slowly than its appearance.

"A lot of cuatristas on the island will say, 'no, no, you only have to play traditional music,' " Mendez explains. "They actually don't approve of other styles put into the cuatro."

Mendez came to Berklee to explore what the cuatro could do. Her Berklee instructor, John Baboian, taught guitar and had never heard of the cuatro before.

But she says that experience helped her see the cuatro with new eyes.

"Coming here and studying with him was like, 'OK, look at all these things that you can do.' " Mendez says. "And he’d be like, 'well can you do that on the cuatro?' And I'd be like, 'I think so, but that's never been done before!' "

That experimentation led Mendez to center the cuatro in jazz music pieces while she was in school. "I wanted to start improvising more, and I feel like jazz was sort of that way for me to get a different language to apply to the cuatro," she says.

Mendez incorporates these unique rhythms into her new album called “Al Otro Lado Del Charco” which means “the other side of the pond.”

The title track, with its jazz-inspired harmonies and odd timing signature that uses five beats per measure rather than the classic four beats, embodies her daring approach.

But the song is about her personal journey as much as her musical evolution. 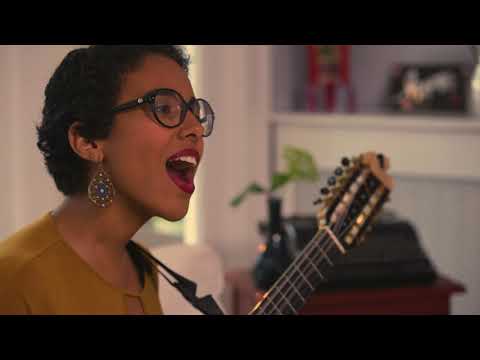 "The lyrics sort of have the idea of living on 'the other side of the pond,' " Mendez says. "So here [in the United States], you know it was hard as far as, you know, the sun wasn't the same and all these sort of metaphors. But then, at the end, I say, 'here, I learned how to live and to love and to learn.' Because I feel like I wouldn't have grown as much if I hadn't come to this side of the pond."

Mendez wants to channel these experiences into a more modern style of cuatro play. But the cuatro isn't just a tool for innovation to her.

It's a piece of home.

"Even though I'm trying to do all these new things and creative things, there's so much about the cuatro that represents who Puerto Rico is and Puerto Ricans are and who I am," she says.

Her pride in the cuatro reminds me of my grandfather, who loved playing his cuatro and taking my family to cuatro music festivals. Hearing the instrument made him feel like he was home in the mountains of Lares, Puerto Rico.

This month marks two years since Grandpa died and left his cuatro to me. So I bring the cuatro to Fabiola and ask if she’ll play it.

When I hand her the cuatro, something unexpected happens:

She points out that my grandpa's cuatro was made somewhere called Hogar del Cuatro Puertorriqueño en Manatí, a place that holds special meaning for her.

"That's where I learned how to play the cuatro, and my first cuatro is from this luthier," she says with a wide smile. "This is amazing!"

In this moment, it doesn't matter how different our life experiences are. This little instrument connects us both to our Puerto Rican heritage, which my grandpa cherished to the end of his days.

Mendez plays the cuatro to honor that connection, while hoping to add a few new chapters to the instrument's long, rich history.