She’s done both and wants to talk about it. To be sure, Kuzmič has always had the gift of gab.

Her new book, “Hold On, But Don’t Hold Still: Hope and Humor from My Seriously Flawed Life” chronicles her journey from food stamps to eating hot dogs with Oprah. She’s known for bringing humor to a messy life with her three children, and the book cover shows Kuzmič in a pink dress, holding a toilet plunger and drinking from a coffee pot.

For the middle-aged, middle-class parent Kuzmič is a gift— funny, hopeful and articulate. She’s overcome desperate situations and ended up making a name for herself. In a nutshell, she’s the American Dream.

“You just need to show up,” she says often.

It’s a message that resonates. This is evident in her social media numbers: she has 2.5 million Facebook followers, and videos with more than a billion views.

Part life coach, parenting guru, and best friend, Kuzmič is funny, smart, pretty and—yes—authentic. She’s the friend you wish you could be.

“She has no shame in the best way,” said Jessica Brookhart, a mother of two boys and Kuzmič fan. “Even when she is talking about the darkest moments in her life, she is able to tell them with humor.”

It hasn’t always been easy, though. Born in Zagreb, Croatia, Kuzmič moved to Hamilton in 1993 as a teen to escape civil unrest. She spent her formative years in Massachusetts where she learned English fluently with help watching the '90s hit television drama "Beverly Hills 90210."

It’s the struggles of Kuzmič’s past that seem to attract many fans. She divorced her first husband while her two children were little. She kept her kids fed with the help of food stamps. The three of them slept in a shared one-bedroom apartment with roommates.

The little money Kuzmič had was from her waitressing tips. One time, a friend had to loan her some money to buy a box of tampons.

“I was so depressed, having suicidal thoughts,” Kuzmič said. “I remember making a pros and cons list so I could figure out if my kids would be better without me, and there were more pros on the list.”

It was in the early 2000s when things started to get better. Kuzmič met Philip Crocco, her second husband, who supported Kuzmič’s ambitions, even though she didn’t quite know what they were at that time. Crocco was also a supportive stepfather. Understanding Kuzmič had been in “survival mode” for years, Crocco encouraged his wife to follow her passion, even if it was just a hobby.

“I loved to cook so I started making cooking videos,” she said. She started a cooking blog, posting a few videos. Shortly after launching the blog Sticky Cook, a woman in Arizona reached out urging Kuzmič to apply for Oprah’s Search for the Next TV Star, a new reality competition.

“I didn’t even own a working television so we didn’t know about Oprah’s competition,” she writes in her book.

Kuzmič applied. She won. In 2011, she was given her own reality show on the Oprah Winfrey Network (OWN) called “The Ambush Cook.” It aired for one season. The show cemented Kuzmič’s joy in front of the camera. Going forward, though, she wanted to produce her own videos and own way—talking about real problems people encounter and not sweeping anything under the proverbial rug.

It wasn’t until 2015, however, that Kuzmič really made her mark. She started discussing common parenting and mothering issues from breastfeeding to raising teenagers, and not loving every minute of motherhood.

“The first couple videos did okay,” she said, adding a couple hundred people viewed them online.

Things changed when actor Ashton Kutcher shared her forth video with his millions of fans (as of today he has 17 million Facebook followers). That video, titled “4 Reasons Women Should Never Breastfeed in Public” is a spoof on people against public breastfeeding. A friend called Kuzmič to relay the news that views of the video skyrocketed; she had no idea until the call. 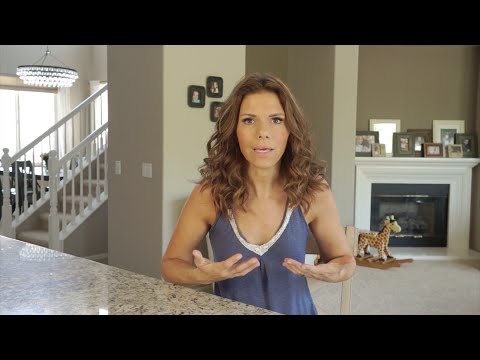 “The last thing I need was to see a perfect mom in a perfect world,” she said. “That would make me feel like a loser.”

It’s Kuzmič’s take on parenthood struggles and life’s daily problems that make her work so appealing. Fans, largely mothers and women, are drawn in by Kuzmič’s charisma and honesty.

When asked what’s in store, Kuzmič is enthusiastic about the future. There’s a podcast coming soon, though she declined to say exactly when. And she wants to write another book.

“I thought I was going to be a one-and-done kind of author,” she said. “But I realized I still have more to say.”

Kristina Kuzmič will read from her new book at the Wilbur Theatre on Wednesday, Feb. 12.