The debate took place 10 days after reports that the College Democrats of Massachusetts had banned Morse from their events, claiming he used his “position of power for romantic or sexual gain.” Since then, the allegations have been challenged and Morse has gone on the offensive.

The topic was front and center during the debate, with Morse saying the whole thing was a political hit job.

"I … again, trust the voters of the first district to focus on the issues, they see it for what it is, and they're sick and tired of the same back room political ploys," Morse said. 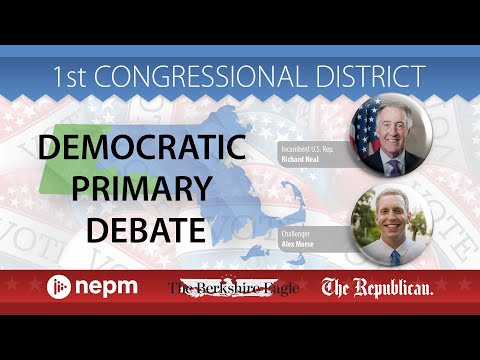 Neal maintained his campaign had nothing to do with it. He said he supports an investigation by UMass Amherst into whether Morse, who taught a political science seminar on campus, violated university policy or federal law.

Morse has denied dating any students who took his class.

Neal said Monday the students who complained should be heard.

"I don't even know the names of the students that have stepped forward," Neal said. "That's the important consideration here."

Just as the discussion was about to shift, Morse wasn't quite ready to let it go, speaking over moderator Ray Hershel.

"We have seen texts of students that have said they actually want to smear this campaign and take it down. It's very clear; the people of this district see right through it," Morse said as Hershel transitioned to the next topic.

Morse – who is Holyoke’s first openly gay mayor – has criticized some of the response to the allegations as homophobic, but did not directly make that claim at the debate.

The controversy was the first topic during the event, but the candidates covered a lot of other ground.

One constant theme: showing up. Neal hammered Morse for his lack of attendance at municipal meetings, including the Holyoke school board, implying Morse was absent as the city's schools were taken over by the state.

"He missed 28 of 62 meetings of the Holyoke School Committee, as the schools fell into receivership," Neal said. "But I want to congratulate you on this, Mr. Mayor: 23 meetings of the school building committee in the city of Holyoke; you missed all 23."

But Morse – who was elected mayor in 2011 – had a similar gripe about Neal. He said the congressman hasn't been there for the district, instead living what Morse called the "high life" in places like Boston and Washington with corporate donors and lobbyists.

"And talk about showing up, and being inaccessible — Congressman Neal hasn't showed up in this district," Morse said. "We're spending more time together tonight than I think we have in the last nine years."

The 31-year-old Morse and 71-year-old Neal didn't find much common ground throughout the hour-long debate, and threw verbal haymakers at each other.

One source of contention was CARES Act, the pandemic relief bill. Neal, as chair of the House Ways and Means Committee, played a large part in drafting the legislation. Morse said it wasn't adequate.

"If the CARES Act was so wonderful and successful, why is it we have to rush back to Washington because it wasn't big enough?” Morse asked. "Because families are still going hungry and losing their homes, and that was happening even before this pandemic."

Neal, as he did several times, touted funding he's brought back to the district.

"A billion [and] $250 million has come back to this district,” Neal said. “Because of the CARES Act, which Mayor Morse said he would oppose, 400 million additional dollars came back to this congressional district. Unemployment insurance — the most important thing that we did — the mayor said he was against it."

As he's done from the start of the campaign, Morse went after Neal for his acceptance of donations from Political Action Committees. He said he'd work for the people of the 1st District, and not special interests like his opponent.

Neal denied any influence from outside money, and that he's used some of the funds to donate to a diverse slate of Democratic candidates.

A version of this story was first published by New England Public Media.