Professors at colleges and universities across Massachusetts joined an unusual national "strike" this week to call attention to racism in higher education and beyond.

As many university administrators all but encouraged their faculty to participate in the so-called "Scholar Strike," it looked more like a display of commitment to racial justice than an adversarial labor action. But participants said they hope the two-day disruption will change minds on campus — and, eventually, remake policy.

Participation in the strike was far from universal. But on Tuesday and Wednesday many professors did suspend or modify classes to host discussions or conduct remote teach-ins informed by the summer's police violence and civil unrest.

The effort's two national organizers said they were inspired by the decision of professional athletes to pause play, however briefly, after the late-August shooting of Jacob Blake by a police officer in Kenosha, Wisconsin.

In greater Boston, the initiative quickly won support — and in some surprising places.

At the start of this week, Harvard's Office of Undergraduate Enrollment communicated "support... to anyone participating" in the action. And Angela Onwuachi-Willig, dean of the Boston University School of Law, said she asked professors to consider granting excused absences to students who missed class to join discussions during the two-day break.

"The students who are most likely to need to participate are [the ones] who are more likely to feel marginalized," Onwuachi-Willig argued. "They'll need it for their sanity." As for white participants, she hoped, "they're going to become really important allies."

One of her priorities in the top job is making today's Black law students feel more welcome than she did — including by supporting initiatives that prior deans might have deemed disruptive.

“I am the man, in some way, in this position, right?," she said. "But there are some lines that aren’t crossable ... values of mine that are not gonna be betrayed in any way.”

Shortly after she learned of the strike, Onwuachi-Willig reached out to others from a growing pool of Black women in law school leadership, including Kimberly Mutcherson at Rutgers Law and Danielle Conway at Penn State Dickinson.

Quickly, they convened a series of seminars on anti-racism in the legal profession that ran across two days. (Another unusual feature of the "Scholar Strike": in most cases, it seems to have involved more work on behalf of participants — not less.)

Those talks join nearly 60 brief academic talks on racism and colonialism across many disciplines shared on the official "Scholar Strike" YouTube channel. 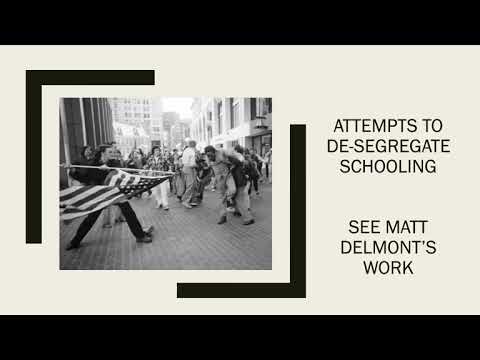 While some students had open and trusting digital conversations about matters of race and identity during the strike, others were more skeptical.

Madeleine Bedenko, a junior at Boston University's School of Theatre, is learning remotely from her family home in upstate New York this semester. Just one of her five professors participated in the strike — and Bedenko noted with disappointment that his syllabus is comprised of films and books almost exclusively by white men.

Bedenko — who is white — supports an initiative by current and former classmates to reform the School of Theatre more radically in the spirit of racial justice: by supporting playwrights of color, bolstering mental-health supports and offering anti-racism training to faculty.

By comparison, the "Scholar Strike" was a little superficial, at least as she experienced it.

The implicit message was: “'Here’s some resources — go check them out,’" Bedenko said. "I think it would be much more powerful to watch a film by any of person of color [in class]. It’d be a lot more educational.”

"Racism is embedded in our structures, in our minds, in our thoughts. And we have to engage in really deep reflection to battle it — every single minute of the day."

Back in June, Onwuachi-Willig published an open letter about her reaction to the wave of Black Americans killed by police — what she called "an indescribable pit in my stomach."

As a scholar and lawyer, she is under no illusions that this two-day effort — or even the summer's historic unrest — will deal structural racism a crippling blow. But she has been moved by the responses among some of her white peers — like a June 23 letter by William Johnson, dean of St. Louis University School of Law, a Catholic institution.

“His letter starts off: ‘Black Lives Matter.  my faith tradition tells me that this is so. My own sense of right and wrong does do as well,’" Onwuachi-Willig said. "I’ve never seen anything like that in a law magazine, period, really — but from a white male dean?”

In closing, Onwuachi-Willig made the case for actions like the Scholar Strike — even if they don't translate into concrete change all at once.

"Racism is embedded in our structures, in our minds, in our thoughts. And we have to engage in really deep reflection to battle it — every single minute of the day," she said.

"That includes questioning... and acknowledging that we have policies — that we can't change in the moment — that might be reinforcing racism. That is what we're doing at the moment."