As Hurricane Henri rumbles toward the northeast part of the United States, forecasters and state officials say the storm has veered west, meaning eastern Massachusetts may not be hit as hard as originally expected.

Governor Charlie Baker, along with state public safety and transportation officials, held a press conference Saturday afternoon to provide an update on the storm response.

"It appears on track to head further west, which means making landfall closer to Connecticut and Rhode Island, which means we should avoid the direct hit that we've been anticipating for the past couple of days," Baker said during the press conference. "That's the good news for eastern Massachusetts and for most of Cape Cod and the islands. Eastern Massachusetts should not see the widespread hazardous driving conditions that we were worried about [on Friday]."

Without missing a beat, Baker added, "But this is New England and it is hurricane season. So please continue to pay attention to your local weather alerts as the forecasts do tend to change." 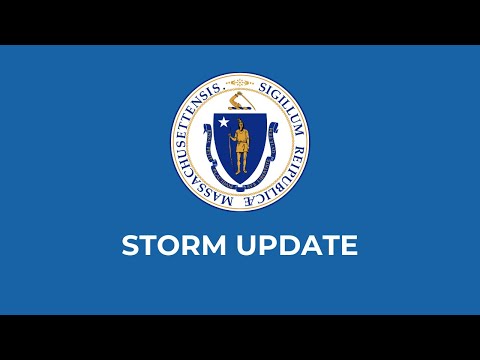 There's still a possibility of widespread power outages across the state as it is expected to experience tropical storm force with high winds and heavy rain, Baker said.

Storm surges and flooding along the state coastline are also expected, specifically in the Buzzards Bay area of Massachusetts. Baker said the region could still see "3-to-5 foot storm surges depending on the timing of the high tides." Parts of Cape Cod, and areas of the south shore could experience flooding.

"But this is New England and it is hurricane season. So please continue to pay attention to your local weather alerts as the forecasts do tend to change."

The updated forecast as of Saturday afternoon points to heavy rainfall Sunday into Monday, specifically in Berkshire County, the Connecticut River Valley, and Worcester County.

"And the likelihood of flash flooding in washed out roads are a distinct possibility in these areas," Baker said, "especially given all the rain we've seen in July and recently this week."

Based on forecasting models Saturday afternoon, Henri will be knocked down to "tropical storm" status as it hits land, said WBUR meteorologist Dave Epstein. Those tropical storm conditions may begin early Sunday, he said.

Before Henri makes landfall, Mass. may see some showers and thunderstorms late Saturday night, Epstein said. During the storm, the heaviest rainfall is expected over the western portions of New England, he said.

Department of Transportation Secretary Jamey Tesler spoke at Saturday's press conference, and said some roads may be impassable due to rainfall on the western side of the state.

"This remains a storm system be taken seriously in Massachusetts," said Tesler. "The National Weather Service says Henri is now tracking the hit to make landfall on Long Island or near Connecticut Sunday afternoon before moving into central Massachusetts in Berkshire County."

He urged residents to be mindful of driving through floodwaters, as they can be much deeper than they appear with strong currents and potential hazards such as downed electrical lines.

Tesler also stressed that coastal areas may have streets shut down due to expected flooding, the MBTA ferry service will remain suspended, and that MBTA commuter rail or trolley passengers should check for updates before heading out.

Boston's Logan Airport intends to stay open and operational, but passengers are encouraged to check airline updates for cancelations or delays.

"If you must travel this weekend, put your safety first. Make smart decisions. Plan ahead," Tesler said.

Baker encouraged safety first as well, and encouraged people to respect the weather, noting that it can always change quickly in New England.

"It's been a long time since Massachusetts has had to think about a hurricane making landfall here. The last one was 30 years ago," said Baker. "While it looks like we'll avoid a direct hit. It's always a good idea to be prepared because predicting exactly where these go and how they play out and how long they stay is always an imperfect science."