“It's eerie and disturbing news to learn about the death of someone with whom you had a long and enjoyable conversation just a few days before. When that individual is someone like Lowell George, the news becomes all the more shocking.”

That was the lede to a Sweet Potato magazine story Dean Johnson and I wrote together in June of 1979, shortly after the untimely death of the former Little Feat singer-guitarist. And that story — the lede was Johnson’s — came to mind again Friday, Dec. 3, upon hearing of Johnson’s death.

Denyse, his wife of 39 years, rang me. On Wednesday morning, she said he had not been feeling well. She went out to run errands and came home at 1 p.m. to find him on the couch, his body cold, a presumed heart attack.

And just like that, the Boston music journalism community lost two of its longtime stalwarts. Both were former Boston Globe colleagues of mine. Johnson covered the same pop/rock area I did in the 1980s before he went to the Boston Herald, expanding his beat to radio and comedy. Alarik covered the folk music scene for the Globe in the ‘80s and ‘90s, an era the paper could commit substantial space to music not in the pop mainstream.

Both went on to have careers in radio. Johnson was a late-night weekend talk show host at WBZ, and Scott was the host of the “Folk Tales” music program on the University of Massachusetts’ WUMB. Scott, a folksinger and guitarist himself, also wrote “Deep Community: Adventures in the Modern Folk Underground” in 2003. The Library Journal tagged it as “an essential primer to the continuing folk revival.” Just this summer, Alarik proved to be a key resource for a book Susie Davidson and I are working on about political music.

I met Johnson in the mid-1970s when we were both writing for the Portland, Maine-based Sweet Potato. We knew each other’s writing from afar — him in Boston, me in Maine — and we each thought the other was the best (or second best) writer the magazine had. I moved to Boston in 1978, the same year Sweet Potato opened a branch and edition. Johnson edited and wrote; I continued writing for the magazine before my Globe days.

When Johnson worked for the Herald, he and I wrote competing reviews. Sometimes, one of us had to leave early to meet deadline, and the other would promise to call if anything of significance happened. We joked that if, at some point, we both made up the same thing it’d have to be deemed true because both major newspapers reported it. (We never did that.)

“I have fond memories of working as Dean's editor at the Herald,” posted Bill Weber on Facebook. “He was a true work horse (in the very best sense of that term). He'd do nearly any assignment, turned in his copy on time and in good shape, was always on the lookout for what was next. A real team player who, when the time finally came (and the budget crunchers at the Herald could no longer deny his value) finally earned his spot on the full-time staff.”

“One of the very best and kindest colleagues I ever had,” added former Herald rock writer Sarah Rodman, now with Entertainment Weekly.

And, as former Herald colleague Larry Katz noted, Johnson was “one of the more straight-laced” members of the rock critic fraternity and thus “kind of an anomaly.” Yet, Katz added, “He was gung-ho to cover the most debauched groups you could think of. He wasn’t a troublemaker but he liked bands that were troublemakers.”

Johnson was on top of the explosive ‘80s boom in Boston standup comedy. Bobcat Goldthwait, one the comics on the scene, called Johnson “a big help to me and the other comedians. Whenever we got a mention, it gave us some credence. We weren’t just lunatics in a bar. It kinda changed the perception, if not among the general public, ourselves. It validated us. It felt like what we were doing was a viable art form.”

Johnson happened to be at the gig when veteran political comic Barry Crimmins revealed in depth the sexual abuse he suffered as a child. Johnson’s writing about this — and his recollection of it — was a pivotal moment in Goldthwait’s documentary on Crimmins, “Call Me Lucky.”

Goldthwait called that scene “a lot of the glue that helped me describe Barry to people who didn’t know that the abuse was going to be a big part of the movie. His article ended up being a lot of the backbone of the second act; it drove so much of the movie.”

Some of the doc was shot in comic Tony V.’s Charlestown studio. Before the movie came out, neither Johnson nor I knew his story played such a key role in it. Finding out, Johnson emailed me: “You will relate to this, I know. When it came time to shoot for the doc, I knew my review had been pivotal but…well…it was a LOT of years ago…couldn't remember for the life of me what I actually wrote, just knew the impact. I had already left the Herald. But thankfully, old buddy [and colleague] Bill Brotherton was still there and able to paw through the morgue and email me a copy before the shoot.”

"[Johnson] brought passion and opinions to the table, had both a sense of outrage and a sense of humor. He touched all those bases.”

Tony V. called Johnson’s death as both shocking and tragic. “We’ve collaborated on scripts, wrote jokes together,” he said. “I was a guest on his radio show many times. He was a good, good man and a real friend. A Boston treasure and a wealth of rock ‘n’ roll knowledge.”

After leaving the Herald, Johnson began working in radio, first at WCAP in Lowell and later at WBZ. He was hired by program director Peter Casey in 2010, initially doing fill-in overnight slots, which later morphed into weekend gigs.

“He had covered media and radio for a long time and was one of the few regular writers that understood it,” said Casey, now a consultant. When he went behind the mic, “he was a congenial host, with a smooth delivery and had a way to talk about almost everything. He brought passion and opinions to the table, had both a sense of outrage and a sense of humor. He touched all those bases.”

Scott Alarik was called “the finest folk writer in the country” by Dar Williams, and the late Pete Seeger termed him “one of the best writers in America.” 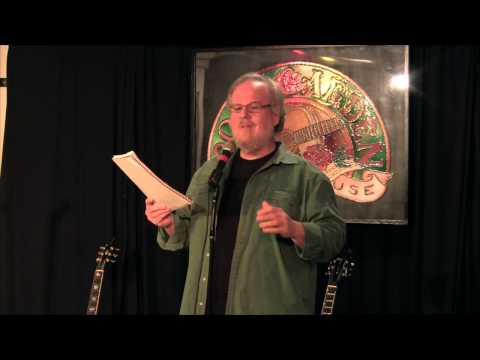 “We were all taken aback, like everyone,” said WUMB program director Jay Moberg upon learning of Alarik’s death. He knew Alarik had been ill and was suffering from fatigue. “But he never indicated it was anything serious. We thought he was rehabbing.”

Alarik started doing the weekly “Folk Tales” in 2016, though he put a halt to it when the COVID pandemic hit in the spring of last year. (The station re-ran old episodes during that time.)

Moberg came to WUMB from the rock radio world and said Alarik “took my hand and made folk accessible to me, which is what makes a great educator — someone who can make a connection with so many people through music and history.”

“Scott was a raconteur with an encyclopedic knowledge."

Moberg said the hour-long “Folk Tales” was one of the station’s “most beloved shows,” noting how Alarik would take three concepts a show, mix music and talk and explain how one genre might morph into another or cross over into the mainstream.

“Scott was a raconteur with an encyclopedic knowledge,” Moberg said. “He poured his time into research; his passion was doing the work, essentially doing educational pieces explaining why this stuff is important. He was thoughtful, but our discussions were not just about music. We had robust discussions about everything from politics to action movies to football.” Alarik, who hailed from Minneapolis, was a huge Minnesota Vikings fan.

In the mid-1990s, Lylah Alphonse was a copy editor in the Globe’s Living/Arts department where Alarik freelanced. “I always learned something new and interesting whenever I was lucky enough to get to edit his stories,” said Alphonse, now the Rhode Island editor for the Boston Globe. “He was always so kind, very happy to have thoughtful conversations about anything and everything and was just such a warm and smart person to be around.”

"Whenever I needed an issue explained or unraveled, Scott was the guy I turned to to make sense of it all and find the right words when I couldn’t."

Veteran Canadian folksinger Garnet Rogers met Alarik back in the mid- ‘70s and quickly realized they shared a similar taste in humor, whisky and music. Rogers, in a Facebook post, called Alarik “one of the funniest, kindest and gentlest men I have ever know, with an unwavering moral compass. He almost never talked about it, but he spent time in a federal pen during the Vietnam War as a conscientious objector.”

“In his later years he has been one of the sharpest, most incisive thinkers and commentators on American politics,” Rogers continued. “Whenever I needed an issue explained or unraveled, Scott was the guy I turned to to make sense of it all and find the right words when I couldn’t. He was funny and wise and a bottomless well of human kindness.”