On “This Is For You,” the opening track of H A U N T E R’s exploratory new album “DREAM THE DAY AWAY” (out May 27), a guided meditation beckons the onset of a dream. “The only thing lost is time; let it take you,” says the voice of Jamie Horseman, one of many selected features across a 22-track sprawl of future beats, electronic hip-hop and experimental neo soul compositions loosely woven into a conceptual narrative. “We are trying to tell the story of a daydream,” says Jonah Levine, co-producer and one half of the duo. “I’ve got ADD, I’m a space cadet,” adds Sander Bryce, the rhythmic side of the project and Boston-area drummer attached to groups like Really From and the since disbanded I Kill Giants. “Music has always been this escape. [The new album] is playing off that idea of escaping.”

In a way, the album is an escape from the project’s knotty origins. Bryce began H A U N T E R as a solo ambition in 2015, fusing his irrepressible chops with live sampling from YouTube videos and live instrumentation into a mash of mathy, jazz-leaning songs with an emphasis on drums. But since bringing Levine into the fold, first as an external producer and now as a
bandmate and collaborator, the vision of H A U N T E R has shifted to a focus on hip-hop grooves and textured, psychedelic experimentation heavily influenced by the likes of Flying Lotus, Hiatus Kaiyote and Robert Glasper.

The latter’s impact broadly presents itself throughout the album, particularly on the breezy “We Are Gonna Be Okay,” featuring vocalist Lo Artiz. Both Bryce and Levine, who are second cousins, explain that Glasper’s jazz/neo soul opus “Black Radio” was the first thing they listened to the first time they hung out as adults on a drive around Los Angeles. 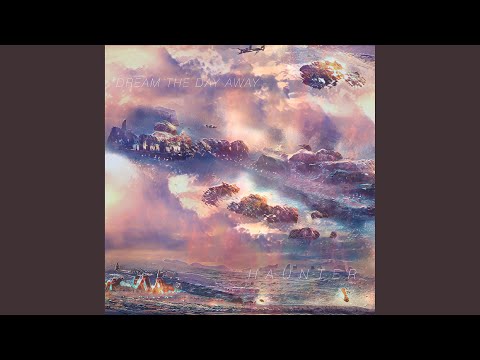 Levine cemented his role as a co-producer when Bryce sent him a group of unfinished studio sessions at the end of 2019 without any prompt or guidelines. “I had this batch of five or six tunes,” Bryce says. “The goal was that I was trying to make stuff for someone else, for different vocalists.” Levine adds: “I remember asking [Bryce], ‘Are you sure you don’t care what I do? Because I’ll really dive into these.’” Levine essentially “finished” the sessions, and the pair lurched forward during the global standstill of 2020 to create half of the album from scratch.

Whereas previous H A U N T E R releases are driven by unbridled energy and intuition, “DREAM THE DAY AWAY” is far and away the group’s most thoughtful and patient release. With a greater emphasis on tones, textures and featured vocalists steering its throughline, the album achieves what it set out to: To bring you into the ethereal world of a dream.

And with this release, Bryce and Levine find themselves locked in a groove of inspiration and creation. “It’s really addicting now to make tracks and take them in all the different directions we want to,” says Levine, also adding that there’s a mass of H A U N T E R songs in the vault, an indication that this daydream has just started swirling.