No entombed Egyptian pharaoh has had the stunning and star-studded afterlife of King Tut. Not that Tutankhamun Nebkheperure, whose brief existence lasted from around 1341 B.C. to about 1323 B.C., planned it that way.

It’s all due to a stroke of good luck. Which would include an amazing dearth of tomb-pillaging, an intrepid archeologist and his team, plus meticulous documentation from National Geographic. Also, an assiduous PR campaign for various touring exhibits celebrating the life and possessions of the “boy king.” (He became king at 9.) Tut-mania has been with us for a very long time. “Beyond King Tut: The Immersive Experience” opened July 8 at the SoWa Power Station. It's up through Oct. 2.

“He wasn’t a significant king,” says Mark Lach, the exhibit’s creative producer. Lach has been deeply involved in Tut productions, dating back to the 1970s. If not for archeologist Howard Carter’s discovery in 1922 of the pharaoh’s nearly intact tomb — disturbed but not robbed — Lach says, “he probably would have got lost in the pages of history.”

Ah, the vagaries of posthumous fame. As it has turned out, Tut became an object of fascination and study for archeologists, Egyptologists, and pop culture enthusiasts; he’s by far the best-known brand name among dead pharaohs.

King Tut’s artifacts first came to Boston in 1963 at the Museum of Fine Arts. A touring exhibit, the “Treasures of Tutankhamun,” went around the world from 1972 until 1981 and hit seven cities in the U.S. (not Boston) stoking another wave of Tut-mania. In April of 1978, Steve Martin, dressed in faux-ancient Egyptian garb, goosed Tut’s pop-cultural profile on “Saturday Night Live.” In a spoken-word intro, Martin denounced the tacky over-commercialization of Tut’s tour and then satirically piled on with a song he wrote, “King Tut.” (A 45 RPM record of the novelty song went to No. 17 on Billboard’s chart.) 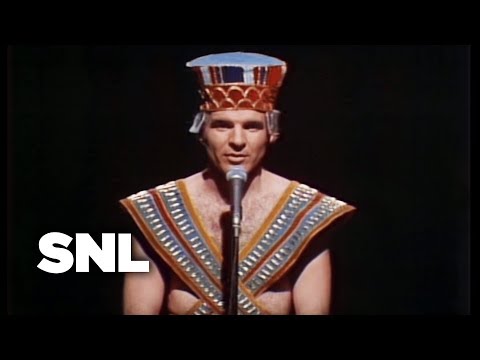 In January of 2020, then-Mayor Marty Walsh announced another artifacts exhibition called “King Tut: Treasures of the Golden Pharaoh,” slated to open at The Saunders Castle at Park Plaza in June. Then, the pandemic derailed those plans.

But here we are in the summer of 2022 and Tut’s back on tour. In a manner of speaking. The wrinkle now is there are no genuine artifacts involved; they’re off the road. They will permanently reside in the Grand Egyptian Museum, just outside Cairo in Giza, expected to open this autumn. But we live in an immersive world of art, history and multimedia projections. The company behind it, Paquin Entertainment Group, has staged immersive shows for Van Gogh and Monet as well.

Lach has been in this business 25 years, starting with the touring Titanic exhibit. For him, this is yet another trip through Tut-land, as he was on board for the final artifacts tour, too. The current exhibit, he says, “is certainly different and there are opportunities to experience the artifacts in a whole new way. It was a real honor to tour the real objects, but with this being the 100th anniversary of [the discovery of] King Tut’s tomb — some say the greatest archeological discovery of all time — it seemed an opportunity and important to do something to commemorate it in a grand way.”

“We talk about him for many reasons,” continues Lach, “with the obvious one being, it’s the only intact tomb that’s ever been discovered and that it’s teaching scholars something new to this day. And it also fascinates us.”

The public is getting more and more attuned to these “immersive” exhibits, giant spaces with slowly shifting painterly projections and atmospheric music.

This is not that, exactly. “We recognize there’s a big difference here,” says Lach. “The story of King Tut’s discovery, the fascination with his untimely death — that doesn’t quite go with sitting in a room and losing yourself like in a Monet or Van Gogh painting. We thought there might be a way to use the large projection format that brings people into something like never before. Because of projection advances and new technology, people want to sit in the middle of a story. And we realized that it needed much more of a storyline.”

Spoiler alert: They know King Tut was frail, but still don’t know how he died at around age 18 or 19. Best guesses include malaria, sickle cell anemia or in battle.

Paquin partnered with National Geographic, with Lach praising its invaluable contribution to the project and presentation: “They’ve been doing research and archeological work in Egypt for the last hundred years. They bring the photos and film.”

This type of multimedia production was called “the future of storytelling” by Kathryn Keane, the vice president for public experiences for the National Geographic Society at the pre-opening gathering on July 7.

Serious museum aficionados often have issues with these new-fangled immersive exhibits. After all, the real artifacts or paintings are nowhere to be seen. The event doesn’t take place in a proper museum. But Lach believes those who decry immersive experiences as middle-brow Disney-esque fare are beginning to shift their perspective.

“I think over the years there’s been a change,” he says. “We take the presentation of any story, this in particular, very seriously when it comes to being academically sound, getting National Geographic on board, getting approval for the storyline from the people on that level.”

It is, of course, served up as entertainment, but, Lach says, so is pretty much everything, whatever the patina that covers it. “If people want to go home and fire up the 85-inch flat-screen and watch a documentary about a certain piece of history that’s entertainment, too,” he says. “As long as we keep the story true, as long as we don’t sensationalize beyond the facts, then the lighting, sound and scenic elements that bring you there are not only OK but the way of the future.”

At the Power Station, you initially enter into a small dark chamber, where the screen comes to life and the Tut basics are laid out via a short film. In building the exhibit, the designers have to create the illusion that you’re not wandering around the vast Power Station open space, but moving from one partitioned gallery to another.”

As such, towering walls and screens are set up to simulate those galleries. The attendee can meander through the rooms at an appropriate pace. (Most people take about an hour.) You can peruse the newspaper clippings about the discovery, check out the blown-up photos of the shiny Tut treasures, gaze into the golden death mask. You could play the ancient board game Senet as they did. You can look at the incestuous family tree in the king’s life room (he married his half-sister). You can ponder a primer on how one makes a mummy — creepy but cool.

There are several places to stop and gawk, but for certain you’ll linger and stare at the outer shrine in the burial chamber, musing upon what may have lain within. The shrine — wood with gold leaf — was placed over three sarcophagi, the last being the solid gold sarcophagus that contained Tut’s mummy. The reproduction is wood with gold paint and sometimes used as a projection screen.

It all leads into the final chamber, an 80-by-100-foot space Lach calls the “crescendo.” It’s “The Journey into the Afterlife” and the most expansive space, where grand, atmospheric music wafts over the sound system and detailed animations are projected onto the four walls and floor, which at times turns into a “lake of fire.” Amidst that lake, in the room’s center. is a low-slung ancient ship, just like the one that presumably ferried Tut on his journey into the afterlife.

The fantastical animation sequence, which took six months and over 20 people to make, lasts 16 minutes and follows the pharaoh’s dangerous, serpent-filled journey through the first day of his passage through the underworld.

Becoming a god was a definite possibility. Egyptians believed that although you technically shed the body when you die — organs removed and stored, brain discarded, corpse embalmed, etc. — you still somehow needed it for that exacting and exciting world beyond.

"Beyond King Tut: The Immersive Experience" runs through Oct. 2 at the SoWa Power Station.