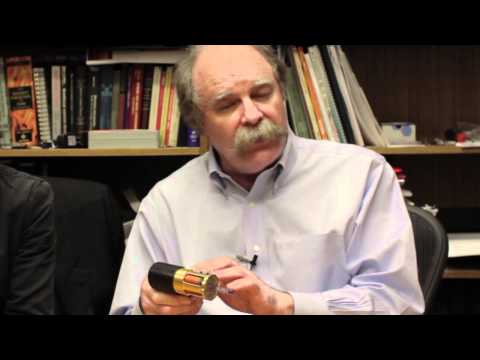 The needle and syringe are icons of modern medicine.

But a device developed at MIT to squirt medicines quickly and pretty much painlessly through the skin suggests that the future of medicine could be needle-free.

The idea is to shoot an extremely thin, extremely fast jet of medicine straight through skin and into muscle. "It's sort of like a laser beam," project leader and mechanical engineering professor Ian Hunter tells Shots.

But because the jet is so thin — he compares it to a mosquito's proboscis — it's unlikely to produce much pain. Details of the prototype are published in the journal Medical Engineering and Physics.

Needles, as we all know, can be quite painful, and it's estimated that at least 10 percent of the population has needle phobia. There's also the risk of accidental jabs, which can spread disease. Jet injections could avoid these problems.

Jet injection technology has been around for quite a while. It's been used in mechanical devices for more than a century (think of a car's fuel injector), and was first used to deliver vaccines in the 1960s. The technology even showed up on Star Trek as "hypospray." Nor is it the only needle-free alternative in the works for vaccines and other medicines.

The sheep did not seem to even be aware that they were being injected.

But Hunter says this device has big advantages, thanks to some 21st-century technology.

Existing medical jet injectors use a spring or other mechanical method to force liquid out. All the medicine comes rushing out at once, at a fixed speed and pressure. It gets the job done, but it's not very precise. The diameter of the jets also tends to be several times bigger than those from Hunter's device, causing more pain and raising the risk of infection.

Hunter's injector uses a piston made from a coil of wire wrapped around a magnet. A computer chip calls the shots for the injection, so to speak, allowing for millisecond-by-millisecond control over the speed and pressure of the jet.

Once the skin is penetrated with a quick burst, the injector can back off a bit to deliver a precise quantity of the drug, exactly where it's needed.

"I think that's the big difference between this device and other devices, is the degree of precision," Hunter says. "We have a degree of control that hasn't been possible before."

The new injector has yet to be tested on people, but has been used on animals, like sheep, without apparent discomfort. "The sheep did not seem to even be aware that they were being injected," Hunter says. But it will be a few years yet before the injector could be ready for use at home or in a hospital near you.

In the meantime, Hunter's team will work on additional features that take advantage of the injector's built-in computer. They want to combine it with a separate device that can sense the thickness and elasticity of the patient's skin, so the injector could adjust its speed and pressure accordingly. It could also tell the difference between the patient's skin and that of the health care worker, to prevent accidental self-injections.