There you are in the middle of the city, traffic all around, planes buzzing above and you notice a little boy on a giant screen pointing up.

"Look," says the boy. And you look, and the on-screen boy is pointing at an actual plane flying in the sky. He knows its flight number, its destination. This is no joke. That is flight BA475 from Barcelona! He tracks its path with his little hand, and then, when the plane is gone, he dashes off. This is a British Airways display ad in London's Piccadilly Circus, and it's using custom-built surveillance technology to identify actual planes in the actual sky. 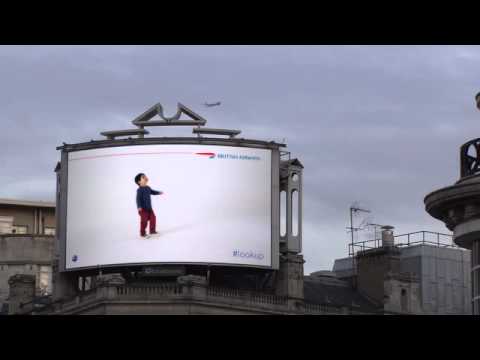 Digital billboards are stepping up their game. They are becoming interactive. There's another stunning example at Euston Station (also in London) that shows a man furiously screaming at a woman who is clearly frightened. But you can help. If you have a cellphone, you can yank the man clear across the station, dragging him from screen to screen to screen until he's way on the other side of the terminal. Take a look: 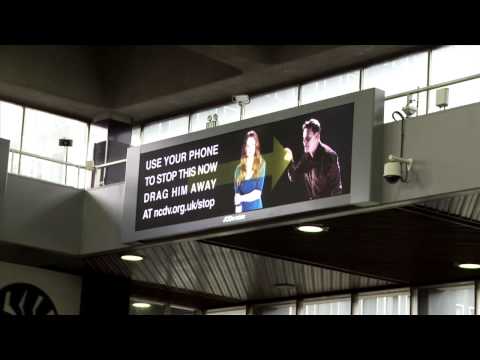 I've got one more. This time it's a fantasy experience available to anyone who steps into a marked spot in the middle of Victoria Station. (London's a happening place for billboard experimentation.) Once you're there, a holographic angel drops down from heaven and lands beside you. You can't see her in real space, but you and she are plainly visible on a screen that everybody in the station can see, and you are free to interact anyway you please. Some people get quite ... frisky:

(I don't like to admit this, but I have, several times, been picked up by a cute girl with giant hands and dumped into a dinosaur mouth on a billboard in Times Square. It's a Forever 21 interactive digital display, and if I stand by the right fire hydrant — I know the one — I always get the girl.)