There is arguably nothing grander in the nation's capital than a state dinner.

The red carpet gets rolled out, the silverware is shined, and the guest list of coveted invitations is winnowed down.

State dinners are intricate diplomatic dances filled with pageantry and symbolism — and they take months to plan. The world is watching, and every choice from the china pattern to the flowers is scrutinized.

First lady Melania Trump carefully prepped for Tuesday night's state dinner honoring French President Emmanuel Macron and his wife, Brigitte, the first of the Trump administration and a big moment for a first lady who prefers to keep a low profile. 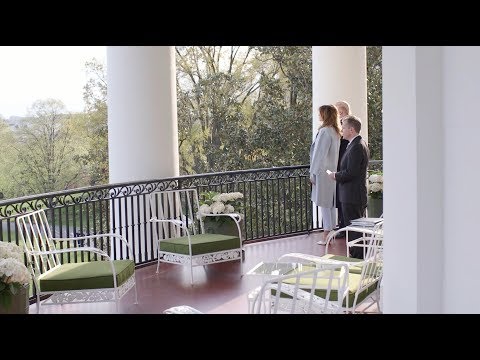 The evening got underway around 6 p.m., as the first of 120 guests arrived, posing for the cameras in front of a wall of French and American flags.

Among the first guests to arrive were Vice President Pence and his wife, Karen. Reporters asked Mrs. Pence how the first lady was doing in her role. The vice president answered instead, saying simply "breathtaking."

When asked whether he would rather sit next to President Trump or Melania Trump at dinner, McCarthy responded, "I hope to get to sit next to my wife."

The only Democratic official spotted at the dinner was Louisiana Gov. John Bel Edwards, quite possibly in attendance because of his state's French heritage. His fellow Louisianian Sen. John Kennedy joked he would thank the French for selling Louisiana to the United States.

Also invited were French celebrity chef Guy Savoy, former Secretary of State Henry Kissinger and two Winter Olympians who had their medals handy for the cameras.

The Macrons arrived last, to the tune of a drum roll, and greeted the Trumps at the doorway under the North Portico. They embraced before taking photographs and then heading inside.

Melania Trump wore Chanel haute couture, a gold dress hand-painted with silver and embroidered with crystals for the evening; her French counterpart wore Louis Vuitton (Bernard Arnault, the CEO of LVMH was one of the French guests in attendance).

But this is D.C. after all, not Hollywood. Most guests couldn't answer the shouted questions of "who" they were wearing.

One notable exception to that rule is Louise Linton, the wife of Treasury Secretary Steven Mnuchin, who wore a silver draped dress. She didn't hesitate when asked about the maker — Italian fashion designer Roberto Cavalli. Linton got into hot water in the past for a viral social media post about her fashion choices.

With nods to her predecessors, first lady Melania opted to use the Clinton and George W. Bush china for the dinner service to match the color scheme of cream and gold.

President Trump started the dinner by making a toast — first thanking his wife for "making this an evening we will always cherish and remember" and celebrating the centuries of friendship between the United States and France.

"May our friendship grow even deeper," the president said. "May our kinship grow even stronger. And may our sacred liberty never die."

Macron echoed the president's comments with his own toast in French, raising his glass to the "unbreakable friendship between France and the United States."

With that, the cameras left and guests enjoyed a dinner showcasing traditional American cuisine with French influences. The menu included greens from the White House garden, lamb, New Orleans-style jambalaya and a nectarine tart with crème fraîche ice cream for dessert.

And, of course, a meal among the French wouldn't be complete without a few bottles of pinot noir.