The daughter of an ex-double agent who survived a nerve agent attack in the U.K. earlier this year says she and her father are "lucky" to have survived the assassination attempt and that she hopes to return eventually to her home in Russia.

Yulia Skripal and 66-year-old Sergei Skripal spent weeks in critical condition after they were found unconscious at a shopping center in Salisbury, England, on March 4. A lethal nerve agent developed in Russia during the Cold War was blamed for the attack.

Yulia, 33, was discharged from the hospital in early April and her father was released last week.

In an exclusive interview with Reuters, speaking from a secret location in London, Yulia appeared on camera for the first time since the attack. She said her recovery has been "slow and painful" and that she and her father are "so lucky to have both survived this attempted assassination." 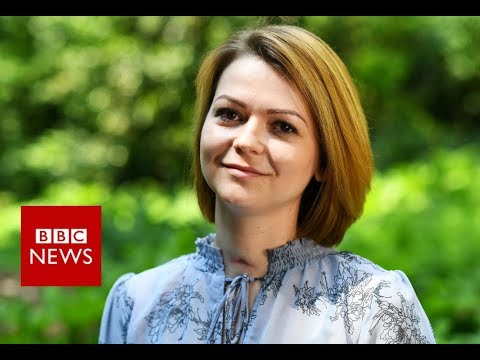 "As I try to come to terms with the devastating changes thrust upon me both physically and emotionally, I take one day at a time and want to help care for my Dad till his full recovery."

"In the longer term I hope to return home to my country," she added.

Sergei Skripal had retired from Russia's intelligence service when he was arrested and convicted in 2006 of working undercover for Britain's MI6. In 2010 he arrived in the U.K. as part of a prisoner swap between Moscow and Washington.

The March attack on the Skripals led to comparisons with the death of Alexander Litvinenko, a former Russian intelligence officer who defected to Britain and died in 2006 after being exposed to polonium-210, a rare radioactive isotope.

The U.S., U.K., France and Germany blamed Moscow for the attack on the Skripals and the incident has brought Russia's relations with the U.S. and its allies to a new low, resulting in tit-for-tat expulsions of diplomats.

Even so, a U.K. chemical weapons lab known as Porton Down, which had been tasked with examining the poison that was used on the Skripals, said it could not say for sure who manufactured it other than that it was "probably only within the capabilities of a state actor."

"The fact that a nerve agent was used to do this is shocking," Skripal, who was in a coma for 20 days following the attack, told Reuters.

"I woke to the news that we had both been poisoned," she said.

Russia has repeatedly denied it had anything to do with the poisoning and accused British intelligence of staging the attack to whip up anti-Russia sentiment. A Kremlin spokesman was quoted by Reuters as saying that in the Reuters interview, he thought Yulia Skripal was speaking under duress.

Yulia said she was grateful for offers of help from the Russian Embassy but "at the moment I do not wish to avail myself of their services."

"Also, I want to reiterate what I said in my earlier statement, that no one speaks for me, or for my father but ourselves," she said.

In April, she made a similar comment in a statement issued through police. Although it was not clear at the time what she was referring to, her cousin, Viktoria Skripal, had weighed in on the poisoning case after being refused a British visa to visit Yulia in the U.K.

In interviews with Russian media, Viktoria suggested that British authorities asked her to denounce Russia as a condition of receiving the visa and that London denied her request because it had "something to hide" about the attack.