The executive branch and the legislative branch are deadlocked. The House could vote soon about whether to hold the attorney general — and maybe others — in contempt of Congress.

What does that mean? How did this happen? What could happen next?

Here's what you need to know:

What's behind it all?

Information. Democrats, who control the House of Representatives, want it. The Republican administration of President Trump doesn't want to give it up.

What do members of Congress want?

The chairman of the House Judiciary Committee, Jerry Nadler, D-N.Y., wants the full, unredacted report of special counsel Robert Mueller on his investigation into Russian interference in the 2016 elections and the Trump campaign. The Justice Department says it can't comply because of federal regulations.

Nadler also wants Mueller to testify and is seeking documents from former White House counsel Don McGahn — and, potentially for McGahn or others to testify, too.

The White House says McGahn cannot give up the documents that the Judiciary Committee has requested, and McGahn's lawyer says he's not going to do anything until this dispute is resolved.

Meanwhile, the chairman of the House Ways and Means Committee, Richard Neal, D-Mass., wants Trump's tax returns. The Treasury Department won't provide them. So Neal issued subpoenas on Friday to try to compel their release.

The leaders of the House intelligence and the House Financial Services committees want financial records about Trump's business dealings from some of his creditors, Deutsche Bank and Capital One. Trump and his family are suing those banks, seeking to block them from complying.

There could be other requests for documents or testimony — and Trump has made clear they'll likely be challenged by the administration.

Why does Congress want all this?

Lawmakers say they have a duty under the Constitution to conduct oversight of the administration, and there are many lingering questions about the president, even after the conclusion of the Mueller investigation.

What is contained in the redacted portions of Mueller's report? Is Trump subject to coercion based on his finances? Did Trump and his family break any laws in the conduct of their business?

The president's decision not to release his tax returns, as all his recent predecessors have done, suggests to critics that he may be hiding something.

The account of his former lawyer, Michael Cohen, also led opponents to believe there may be evidence of wrongdoing.

Cohen told members of Congress earlier this year that Trump routinely inflated the real value of his assets in order to qualify for bank loans or misrepresent his apparent wealth — and also that Trump deflated the value of property he reported to authorities in order to pay less taxes.

Financial records from Trump's creditors, evidence from his tax records or now-secret findings by Mueller all could reveal more — and Democrats are eager for as much political ammunition as they can fire.

Why won't the administration comply?

Trump calls all this "presidential harassment."

Democrats didn't get what they wanted from Mueller's investigation, he argues, and so they're desperate to scrape together whatever else they can.

White House press secretary Sarah Sanders said the House leaders want to distract from the good news Trump continues to deliver about the economy and to drag out the Russia investigation.

Administration officials say they have the law on their side.

Attorney General William Barr argues that he's prohibited from revealing the grand jury material in the Mueller report to anyone, including members of Congress, because of the vital principle that the workings of a grand jury must be secret.

Treasury Secretary Steven Mnuchin and others argue that Congress' power of oversight under the Constitution doesn't amount to a license to snoop into the affairs of private Americans for no reason — as he says lawmakers are doing with Trump's taxes.

The request, he said, does not have a "legitimate legislative purpose."

Also, there is a longstanding practice that enables an administration to shield some of its workings from the public under "executive privilege," the doctrine that emphasizes the importance of those within government being able to confer among themselves confidentially.

Barr argued that privilege is what protects the underlying material from the Mueller report and White House counsel Pat Cipollone argued it means McGahn's notes are beyond the reach of the Judiciary Committee.

What's going to happen next?

The Judiciary Committee has voted to recommend that the full House find Barr in contempt.

House Speaker Nancy Pelosi, D-Calif., hasn't said when the chamber may take that vote, but it could happen later this month — and it could include more subjects than just the attorney general.

Mnuchin, McGahn or others also could find themselves in contempt of Congress, depending on the way this dispute runs.

The Justice Department argues that Barr can't be in contempt because he continued negotiating with Nadler's committee to try to reach an accommodation about Mueller's material.

Republicans on the House Judiciary Committee made the same point — and ranking member Doug Collins of Georgia also observed how much more time had elapsed before Congress held then-Attorney General Eric Holder in contempt in 2012.

Democrats are just speeding ahead for the sake of a rabble-rousing political scrap, he said — not with any real interest in negotiating. When these cases go to court, a judge could decide as much, Collins said, and rule against the Congress.

Will there be court battles?

Oh yes — and they likely will be where these disputes ultimately are resolved. Members of Congress could ask a judge to order the administration to comply with their wishes; administration lawyers would ask to stand by their earlier positions.

It'll take a while, though. Holder's case was still active until a settlement last week.

The time issue is part of the political strategy for both sides. Democrats want to strike while the iron is hot and to keep their investigations into Trump in the headlines ahead of next year's election.

Trump and Republicans know that a court fight will take years, especially one involving big constitutional questions about the powers of co-equal branches of government. Meanwhile, much of the material in question likely will remain under wraps.

At least one dispute could be resolved before next year's election — a federal judge in Washington, D.C., said Thursday that he wanted to expedite the dispute over Trump's records from an accounting firm.

Is this a "constitutional crisis"?

Some Democrats are calling it that; other people call it a "constitutional confrontation."

A truly unprecedented impasse might open if a judge were to order the administration to give Congress material under dispute and it refused. In past showdowns like this one, court have usually resolved them.

There is always tension between Congress and the executive branch, even when the sides belong to the same party.

That push-and-pull relationship is built into the Constitution, and it often becomes exacerbated when one party controls the White House and another controls one or both chambers of Congress, as it is now.

Each time, each side accused the other of doing what Republicans and Democrats are accusing the others of doing now: disregarding the other's powers and responsibilities under the Constitution in an attempt to win in the political arena. 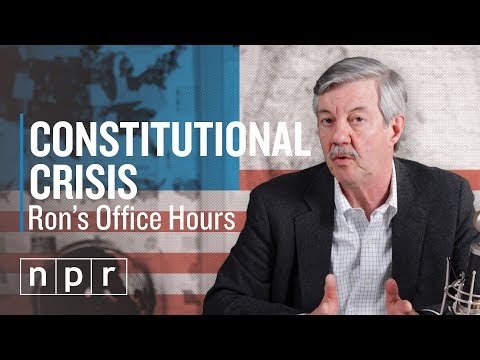