Given that not one but two national anthem stories have entered Only A Game’s orbit this summer, it feels like the right time to round out our coverage of recent noteworthy (and/or cringe-worthy) performances of the national anthem...

This summer's Copa America Centenario (the Americas' regional soccer tournament) couldn't survive the group stage without a mishap — or two.

First, in Uruguay’s opening match vs. Mexico, the PA system blasted Chile’s anthem instead of Uruguay’s, leading to an awkward situation in the stadium — and eventually a sheepish apology on Copa America’s Twitter account. 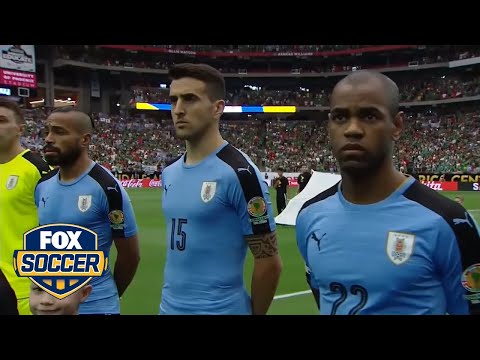 Sounds remorseful enough. But only a day later there was another problem. Before Chile’s match against Argentina, a track by pop star Pitbull began to play through the PA system during the Chilean national anthem. Fans and players alike did their best to drown out the out-of-place pop music and finish the song.

Mishaps aside, playing the national anthem before international sporting events seems logical. But how did the tradition begin for domestic competitions?

In North America, the ritualization of the national anthem at domestic sporting events evidently began at baseball games following the U.S. entrance to World War I and proliferated during and after World War II. By the middle of the 20th century, the "Star Spangled Banner" was a stalwart of the professional sports spectacle in America.

Lots of people think it should be that way; many others don't. In the wake of recent anthem controversies (see the Gay Men's Chorus at San Diego's Petco Park,  The Tenors at the MLB All-Star Game, or Dwyane Wade vs. the Toronto Raptors), these debates have resurfaced.

Some say the song has become so commonplace that the patriotic message has been muted. In response, some sports organizations have taken steps to encourage more rousing renditions.

While the Cleveland Cavaliers are starting to get the fans involved, Virginia Tech basketball coach Buzz Williams notably makes a point to impart the sanctity of the anthem onto his players before the first game of each season.

Meanwhile, a recent LA Times story, titled “Oh, say, can you be quiet during the national anthem?,” noted a lack of proper decorum during the singing from late fans, vendors and ticket collectors in stadium concourses across America.

Meanwhile, a Canadian newspaper, reacting to the All-Star Game controversy, suggested that the anthem might not serve its ostensible purpose anymore. And rather than reforming the tradition, the newspaper suggested scrapping it:

When it goes painfully awry — who can forget how Roseanne Barr screeched her way through the U.S. anthem before grabbing her crotch and spitting on the field at a baseball game in 1990 — it’s tempting to wonder whether it’s time to scrap the practice altogether.

Even when a singer nails it, some see the anthem ceremony as an unnecessary distraction that has little to do with the event at hand.

Jeff Perrett, a Canadian offensive tackle with the Montreal Alouettes, admits he listens closely to the anthem mostly to catch an embarrassing gaffe or misstep.

Perhaps it’s not surprising that many players would tune out the anthem, given that most professional teams feature talent from a variety of countries, and the fact these aren’t international competitions to begin with.

Then there are some critics who contend that the national anthem is a siren song — a tactic for cultural conformity.

Dave Zirin of The Nation is of the mind that the national anthem is another example of politics seeping into sports, as he summarized in an interview with the Huffington Post in 2011.

The point I try to make in "Not Just A Game" is that there’s all kinds of politics in sports, whether we want to see it or not. There’s the politics of public funding of stadiums; of nationalism and militarism at the parks; war planes flying over the head during the national anthem; and having Lt. General David Petraeus flipping the coin before the game. There is even politics in Major League Baseball. The commissioner Bud Selig ignores the pleas of Latino players who don’t want to have to the 2011 All-Star game in Arizona. It’s all political.

So does the national anthem serve its purpose faithfully? Should the ritual be reformed? Or should it be scrapped? Let us know what you think.