It’s game night in downtown Tokyo. This is the first season of Japan’s latest premier basketball league, so many of the people filling the stands have never seen a game before.

The home team, the Shibuya Sunrockers, is hoping to win over the crowd by putting on a show. Forward Ira Brown, a 34-year-old American, gets things started with a dunk.

Tokyo is maybe not where you’d expect a 6-foot-4, broad-shouldered, black guy from Texas to end up, but the style of play in Japan is part of why Ira Brown is here.

"There are a lot of NBA players that come over here and try to be more ball dominant because, of course, in the States that's what you have to be," Brown says. "But here in Japan, it's like it's not necessary. They simply want you to be a good team player."

"Do you like that feeling more than the ball-dominant feeling you were describing?" I ask.

"Oh, I love that feeling because with me, mostly, it's, like, family-oriented," he says. "I feel like if the team succeeds, I succeed."

Being part of a strong, stable family is important to Brown. He didn’t have that growing up, back in Corsicana, Texas.

"And then that evening they threw a cocktail bomb in our house, and it ended up burning our house down."

"The adults of our family, they were on drugs and they were out just running the streets, pretty much," he says. "And my mom and dad were on drugs really bad. You walk in and see your mom doing crack or catching your dad doing it or whatever. The living situation was kind of like, OK, you either sleep on the floor or you sleep on top of clothing or you sleep on top of – wherever you can possibly sleep is where we slept."

Brown said they didn't have running water to do laundry or take showers. So at school, he and his cousins got teased for smelling bad. They were called "Dirty Brown" and were always getting in fights.

"Of course I felt hopeless," Brown says, "but I knew that it's either continue to be poor or continue to smell bad, or continue to do all these things or just simply do something about it. Like, I borrowed the lawnmower and go mow lawns and stuff in order to get money, and we picked up pecans in sacks and we'd go sell the pecans or whatever to the local pecan factory. So there were always ways in which I wanted to earn money and earn it the honest way."

Things finally reached a breaking point when Brown was 9, living in a house on the east side of town.

One day, he and his cousins got in a rough fight with a family down the block.

"And then that evening they threw a cocktail bomb in our house, and it ended up burning our house down," he says.

The family scattered. Brown went to live with his grandmother, a woman who knew something about overcoming adversity. She'd lost both legs to diabetes, but he says she still kept a positive attitude. And there were other inspiring adults, too. Like Milton, Brown's math tutor.

"He was pretty much my father figure in which I looked up to visiting every single week," Brown says. "And he had this really huge ring on his hand, and he always, like, let me play with it or whatever, let me put it on my finger. And it was, like, a championship ring of some sort. I don’t really remember the exacts."

Brown says that ring inspired him to dream big – and he pushed himself. He became a high school basketball and baseball star...and was drafted in 2001 by the Kansas City Royals.

"I was a starting pitcher first, in my career, and then later in my career I was a reliever. Topped out at 97 miles per hour," he says.

And after five years in the minors, he couldn't see a future in baseball, so he decided to go to college and play basketball instead. He chose Gonzaga University – the biggest draw was its warm community.

"When I went there for my visit, I fell in love with the place. Everybody knew everybody and it was just one big family," Brown says.

And he made them proud, soaring over the competition with a 45.5-inch vertical. 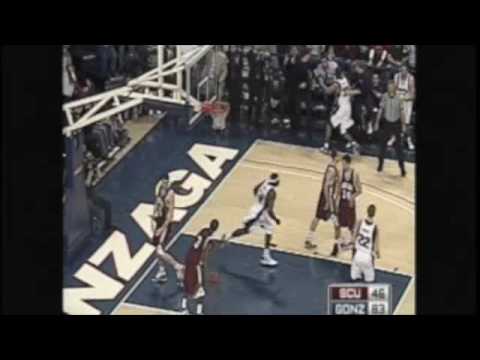 Brown finally got that ring he'd dreamed of as a boy – three of them in fact.

"I got the WCC Championship two years in a row. And I also got a Sweet 16 ring in the NCAA tournament," Brown says.

After college, he played briefly in the NBA Development League, then went overseas to teams in Mexico, Argentina, the Philippines and finally Japan.

In Search Of A Family

Brown is happy here, riding the train into downtown Tokyo for games, alongside weary salarymen and dolled up Harajuku girls.

But still, his childhood haunted him. He feared repeating his parents' sins, so he turned to his faith, went on a fast and abstained from sex. It was tough.

Then, a few weeks later at a friend's birthday party, he met Ayaka.

"And we sat there on the couch and chatted for, like, three hours straight, and I was, like, 'Man, this is my wife.' So sure enough, we got married," he says.

"We're closer to her family," Brown says. "We can take care of them — because that's one thing I really, really admire about the Japanese culture is that they take care of their elderly."

So he resolved to fully commit to Japan by getting his citizenship. It wasn't easy: the application process took two years and then there was a difficult language test.

"At the bottom of it, it says, 'What's your hobby?' And so I put my hobby is, like, watching sumo, eating sushi and going to the onsen. So, I ended up passing the test," he says.

"No matter the situation or circumstance, understand that there is always something that you can do to succeed. Don't ever count yourself out because of the hand that you were dealt."

Becoming a citizen has also helped Brown's basketball career. Rules limit the number of foreigners allowed on the court, but now, he can play the whole game – a real advantage for his team.

It also means he can play on the Japanese national team. Last year, he traveled to Iran for the regional championships. Next up, he hopes, the Tokyo Olympics.

Japan is hoping to qualify an Olympic men's basketball team for the first time since 1976. As the sport improves, more kids here are starting to play, and they look to Brown for inspiration.

After games, Sunrockers players take a bow to thank fans for coming. Then, fans come courtside, and Brown runs down the line, giving them high fives and a wide smile.

It's a long way from tiny Corsicana, Texas. But every summer, Brown still goes back, bringing kids there donated basketball shoes, and a little bit of hope.

"Well, I just tell them, like, no matter the situation or circumstance, understand that there is always something that you can do to succeed," Brown says. "Don't ever count yourself out because of the hand that you were dealt."