This story first aired in February of 2018. It was re-broadcast on our 7/25/20 episode ahead of the release of Brett Rapkin’s documentary, “The Weight of Gold,” which premieres on Wednesday, July 29, 2020.

A few years ago, independent filmmaker Brett Rapkin started noticing blurred vision in his left eye. At first, he thought it was no big deal. But it turned out he was suffering from keratoconus, a degenerative eye condition that, in severe cases, requires a cornea transplant. Rapkin’s search for a less invasive treatment led him to a story he needed to tell – about Olympic athletes and mental health.

And, just a quick warning, this story includes conversations about suicide.

Brett Rapkin’s search for treatment of his keratoconus eventually brought him to the office of Dr. Brian Boxer Wachler. A specialist based in Beverly Hills, Dr. Boxer Wachler had pioneered a treatment known as the Holcomb C3-R procedure.

"He had used this procedure on Steven Holcomb, who had become legally blind while being the captain of the U.S. bobsled team," Rapkin says. "He had Steven’s book in his waiting room, which is called 'But Now I See.' And I would read it in chunks while I was waiting for my appointment, and I was blown away by the story."

NBC told the story in its broadcast during the 2010 Vancouver Olympics: 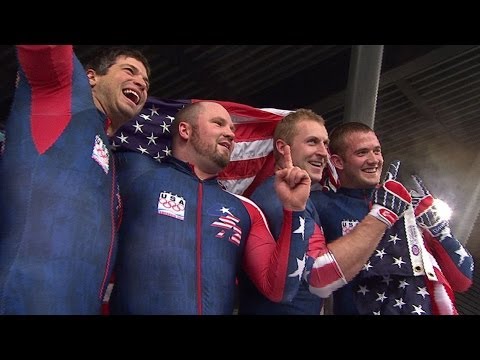 The United States hadn’t won a gold medal in the four-man bobsled since 1948. Bobsled is a team event. But during the broadcast, it was clear the focus was on the face of the U.S. bobsled program: driver Steven Holcomb.

But it was the story of what happened before Holcomb’s historic gold medal that most fascinated Brett Rapkin. In 2007, Holcomb attempted to kill himself by ingesting 73 sleeping pills and washing them down with a bottle of Jack Daniel's.

Rapkin had his next film idea.

Steven Holcomb: Not Your 'Typical Olympian'

"Our plan was to tell the inspiring story of a guy who had survived that, miraculously woken up, gotten his legal blindness fixed and won a gold medal," Rapkin says.

Rapkin reached out to the Olympic champion, and Holcomb agreed to an interview.

"He showed up to the interview. He was an incredibly friendly guy, soft-spoken," Rapkin recalls. "Doesn’t look like your typical Olympian. Kind of stocky. We had dinner in Santa Monica, chatted for a bit, and the next day we did the interview. It lasted, I want to say, close to three hours, and there were some pretty emotional moments."

Holcomb talked about what it was like to have been losing his eyesight while still competing. He actually kept the condition secret, knowing that it could potentially cost him his career.

"It’s scary," Holcomb told Rapkin. "I had to withdraw from my friends and my family and society in general and just really kind of became closed off. And I kind of slipped into a depression, knowing that this was inevitable, and it was going to happen."

"He was putting himself and his teammates' lives at risk every time he drove down the bobsled course," Rapkin says. "You combine that with his own mental health challenges that are probably genetic, and it became an unbearable situation for him."

"It just made sense to me — I mean it just made sense that you, if I just end it now, it solves so many problems, and everything will just get better, and I'll be doing people a favor," Holcomb told Rapkin. "They won't waste their money on me. They're not going to waste their time. And then my eyes — my eyes are going bad. I don't want to go blind, so I’m just kind of, you know, killing 10 birds with one stone, and it just seemed, like — to me it was completely logical. And it made sense. And that's what's scary about depression, is that stuff does make sense. And you just end up doing crazy things.

"We talked about that at length," Rapkin says. "And he was quite emotional, in particular, talking about how it would have affected his mom and his family if he hadn’t survived his attempt. And he talked about how grateful he was to have survived, and that he could tell his story."

'He Was Someone Who Had Suffered'

After the gold medal in 2010, Holcomb went on to win two bronze medals in Sochi. When he sat down with Rapkin, Holcomb was just 10 months away from going to South Korea for what he expected would be his last Olympic Games. He’d been competing for the U.S. since 1998 and didn’t know what he was going to do next.

"After he went to Pyeongchang, he was going to have to move into his mom’s basement and figure out the rest of his life," Rapkin says. "That was his head space a few months out from the Winter Games. And, 12 days later, I got a call from his longtime agent that he was dead."

On May 6, 2017, Holcomb was found dead in his room at the U.S. Olympic Training Center in Lake Placid, New York. He was 37. A preliminary report from the local coroner found a lethal combination of alcohol and sleeping pills in his system.

"There was no indication to me that he wanted to harm himself," Rapkin says. "He was excited about teammates that were returning. He was excited about some new equipment that he had gotten for his bobsled. He had so much that he was looking forward to. And his family and friends feel very strongly that his death was not intentional. So we may never know exactly how he died. But we know that he was someone who had suffered."

"As we cheer for these young men and young women, as we become fascinated in their personal journeys and stories, I think it’s also important to recognize their humanity," says Dr. Scott Goldman, a licensed clinical psychologist and the director of the Performance Psychology Center at the University of Michigan.

In more than a decade of working with athletes, Dr. Goldman has seen firsthand the unique challenges facing Olympians who remain mostly anonymous except for a two-week window that comes every four years.

Seeking Out Other Olympians

After Holcomb’s death, Rapkin decided to expand his project — to speak to other Olympic athletes about their struggles with depression and the after-effects of competition. And, soon, athletes started reaching out to him.

"So I basically got on the phone with Brett. I just thought this was such an important story," says Sasha Cohen, who won silver in ladies' singles figure skating at the 2006 Games in Torino, Italy.

And while Sasha's never been diagnosed with depression, she’s experienced the pressures of being an Olympian. That pressure only intensified heading into those 2006 Games, where she was considered a medal contender following her Olympic debut in 2002.

"It’s really difficult," Sasha says. "I remember one summer, it was the Fourth of July. I went with my trainer to the track, where we did sprints. And I just knew that my family and my friends, they were all on a beach in California having a barbecue and being social and watching fireworks. And I was in the midst of a 100-degree summer just feeling so nauseous from the sprints and so alone. My mom was a big support for me, so I would call her. I think on that day I called her, crying. And I was like, 'I don’t want to be here. Why am I here?' and, 'This is so hard.'

But Cohen’s most challenging moments came after she stepped away from the ice. After dedicating her life to her Olympic pursuit, she enrolled at Columbia University in search of a new purpose.

"I went to a career fair at Columbia, and I checked out every booth and employer and tried to get a feel for what the jobs were, what I’d be doing, trying to imagine myself there," Sasha recalls. "It was strange. I was 30. Everyone else was 20, 21. And it’s just a very different life from what I had come from."

Sasha Cohen is just one of the Olympic athletes who have told Rapkin their story. He’s also spoken to former Olympic skier and NFL player Jeremy Bloom, as well as swimming legend Michael Phelps, who has been very open about his own struggles with depression since retiring from the pool as the most decorated athlete in Olympic history.

"Every single athlete I’ve talked to, some of whom still have strong affiliations to the USOC, have been not just willing, but enthusiastic about telling me that we need more help," Brett says. "There’s no doubt that Olympic athletes need more help."

'The Weight Of Gold'

"Steven was roughly my age. He was in his late 30s. It’s bizarre," Rapkin says. "I had dinner with the guy. I spent an entire day working with him, talking with him. We went and filmed his eye doctor checkup. It’s still totally shocking that he’s not around."