This story originally aired on March 31, 2018. This web feature has been updated accordingly.

Gary Gulman has been a stand-up comedian for over 25 years. He's performed on Jay Leno, David Letterman, Jimmy Kimmel, Conan.

But it's only in the past few years that Gary's really started telling jokes about living with depression.

Here he is in January 2017 on the Late Show with Stephen Colbert: 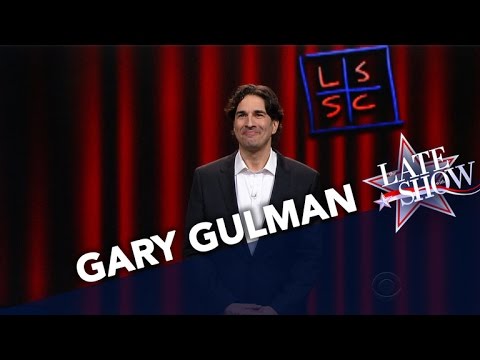 And here's the thing: Gary Gulman might not be doing this — might not be talking about his depression, might not even be a stand-up comedian — if it weren't for sports.

Football 'Is Not For Me'

Gary's story begins in a working class city outside Boston called Peabody. His parents divorced before he was 2 years old. He mostly lived with his mom and two older brothers. They were on food stamps.

"And I got free lunch, which was humiliating," Gary says. "They would take the money from all the kids who had money for lunch. And then it was like, 'All right, now the free lunch kids — why don't you zeros line up? And we'll hand you these fluorescent pink tickets' — as if the overalls and bare feet didn't give away your level of wealth."

Hockey was one of the first things Gary wished his family could afford. But the $100 fee was too much. So Gary looked for other sports. Some of his friends played football.

"And I just remember thinking, 'That is not for me. I need something where they're penalized for trying to hurt you,' " Gary says.

Gary ended up falling in love with basketball, and he quickly stood out. Gary's 6-foot-6 — and he could jump higher and run faster than most of the other boys.

But there was something they had that he didn't.

"They were just tough boys," Gary says. "There was an expression I remember growing up that my father would use to describe — and it was always other peoples' kids: 'Oh, he's all boy. That one's all boy.' And it was never used to describe me. Because I was really soft. I had a huge stuffed animals collection. I loved to paint and draw. And it's just this ridiculous irony that I was also born with a lot of natural athleticism and size."

While his coaches saw someone who just needed to toughen up, Gary was the type of kid who stayed up late watching the Johnny Carson show — and loved making his teammates laugh by imitating Billy Crystal and SNL.

But Gary also had this belief that he’d never be happy unless he became a star.

"And once you achieved great things, then you would feel good about yourself," he remembers thinking.

Gary dreamed of someday hosting his own late-night show, but he figured he had a better shot at stardom through basketball. His self-esteem rode on every performance. If he missed his first shot, he'd feel humiliated. After a bad game, he'd feel even worse.

"This is very sad — I saw no point to living after that game," he says. "I was legitimately contemplating suicide, which is an ill, sick response. It's clear now, looking back on it, that I had a mental illness."

But it would still be years before Gary Gulman received any help.

'We're Gonna Get You A Scholarship To College'

Gary became a standout high school basketball player. He got attention from some Div. III colleges.

But during Gary’s junior year, a couple of assistant football coaches noticed him dunking in gym class. The coaches were twins in their late 20s. They called themselves the Jetsons — they felt they were "out of this world" — and they told Gary he could be a bigger star on the football team.

Gary tried to ignore them, but the Jetsons were persistent.

"The first day of summer vacation I got a call at 6:30 a.m., and it was one of these guys," Gary recalls. "He said, 'It's Jetson.' He gave me the address and directions to this gym and said, 'Meet us there in 45 minutes. You're gonna train with us all summer, and we're gonna get you a scholarship to college.'

"And I hadn't thought about how I was going to pay for college. And they, with one phone call, had put all that anxiety aside because I believed them. They were so convincing."

So Gary spent the summer training to play tight end.

When the season began, Gary still didn't really know how to block, so he only played offense in passing situations. The defense knew what was coming, but Gary was so much bigger that he couldn't be stopped.

"I remember being very frightened because I was like, 'I don't feel like this guy who's so dominant and powerful,' " Gary says.

But just as the Jetsons had promised, college coaches wanted Gary.

He accepted a full athletic scholarship to play at Div. I Boston College. The coaches told him he might even get to play as a freshman.

"In my head, I was like, 'This is insane. I don't know how to play football that well. I haven't played very much,' and that became clear almost immediately," Gary recalls.

Gary fell into a routine: come home from morning practice, then sleep until afternoon practice.

"And it was clear, looking back on it, that I was trying to sleep away my life," Gary says. "I was incredibly depressed."

'Why Don't You Just Quit Football?'

When the team finally had some time off, Gary went home to Peabody. He mostly slept. But he also talked to his older brother, who’d once suffered from a bout of depression.

"He said, 'You sound just like me,' " Gary recalls. "And I don't know how he had this insight, but he said, 'You need to tell somebody at the school how you're feeling.' "

Gary did. He was sent to Boston College's head of counseling services, a guy named Dr. McGuinness.

"He asked me a bunch of questions," Gary recalls, "and I remember thinking, 'This is really pleasant that somebody's asking me questions about myself and listening.' And then, maybe halfway through our session, he said, 'Why don't you just quit football?' And I remember thinking that that was such a crazy idea."

For one, there was his scholarship. And Gary didn't admit it to Dr. McGuinness, but he still felt like he needed to be a star athlete to be a worthy person.

So Gary stayed on the team — but he kept seeing Dr. McGuinness.

"I think up to that time in my life I had been depressed most of my life and I just thought it was how everybody lived — that everybody struggled just to get out of bed every day, and everyone felt that they were a lousy person unless they achieved great things," Gary says.

"The more I heard from people saying that I had relieved their anxiety and depression, the more I realized that I had made the right choice."

Gary Gulman on his comedy

Gary never played in a game, but he made it through that freshman season.

Sometimes the happiest part of his day was getting his teammates to laugh — or listening to comedians on cassette tapes at night.

That spring, before the team's big intrasquad scrimmage, Gary met with Dr. McGuinness.

Late in the first half, Gary missed a block on a defensive lineman.

"And he went past me with such ease and tackled the star quarterback," Gary says. "He got sacked so hard."

The head coach was furious. He screamed at Gary.

"My lip was quivering. I was almost in tears and I was like, 'Thank you, God. Thank you. This couldn't be a clearer sign.' "

'I Had Made The Right Choice'

Gary was able to get financial aid and stay at Boston College. He continued treating his depression. In 1993, he graduated and took a job as an accountant. At night, he started performing at open mics.

"It was clear, looking back on it, that I was trying to sleep away my life. I was incredibly depressed."

Within a few years, Gary was able to quit his day job and become a full-time stand-up comedian.

When Gary and I spoke, he initially said he regretted those two years playing football.

But then he told me that if it hadn’t been for the sport, he might not have gotten help for his depression for years — if ever.

"I may have muddled through with a low-level depression for the rest of my life," he says. "And I may not have had the confidence to pursue comedy."

But even after starring in Netflix specials and becoming a regular on late night TV, Gary still had to manage his own mental health.

Just three years ago, his depression and anxiety became so severe that he was hospitalized.

Gary started to doubt his career choice. He thought he might never be able to do stand-up again. But he got back on stage — and started doing what he'd never done before: opening up about living with depression.

"Luckily there was feedback, positive feedback, that I got in the form of laughter," Gary says.

Since he's started talking about mental health on stage and in interviews, Gary's been hearing from a lot of strangers. Some say they're grateful he's been able to articulate what it's like to have depression. Others tell him they listen to his jokes before bed because it makes them less anxious.

"So that made me feel like I needed to continue to do stand-up comedy," Gary says. "The more I heard from people saying that I had relieved their anxiety and depression, the more I realized that I had made the right choice."

Gary Gulman's new HBO special, "The Great Depresh" premieres on October 5, 2019. To learn more about Gary's football and comedy careers, listen to his interview on the Hilarious World of Depression podcast.