"High school basketball in Iowa was it," Tina Koepnick says.

The culmination of the girls’ high school basketball season was the great state tournament in March.

"It was really an extravaganza," Koepnick says. "Veterans Memorial Auditorium could hold about 14,000 people, and it was packed. It was a show. There was a salute to the states. It’s like a pageant. They had costumes and flags, and they did this whole halftime ceremony of showcasing every state, with Iowa being the last."

"It was just surreal," she says. "It was a lot of joy and a lot of celebration throughout the whole community."

Koepnick lives in Iowa City now. When she goes back to Ankeny, people still recognize her. They stop her on the street.

In 1985, Koepnick was inducted into the Iowa Girls High School Athletic Union Hall of Fame. Her high school scoring average was … zero.

Koepnick played six-on-six basketball. Back then, all of Iowa’s official girls’ high school teams played six-on-six. The game was invented a few years after men’s basketball in the 1890s, and it was thought to be an appropriate, modified version of the game. One fit for ladies.
"There’s the line down the middle of the court, so the half-court line. There’s three women — or three girls — on either side of that, and they can’t cross that line," says Jennifer Sterling, a lecturer in the sports studies program at the University of Iowa.
"So the three girls on one side are guards. The three girls on the other side are forwards. And so the forwards, all they do is shoot. And the guards, all they do is guard the other team’s forwards."

Koepnick was a guard, which explains her zero-point scoring average. And there were even more rules that restricted the movement of girls playing six-on-six. They were only allowed to dribble twice before passing or shooting the ball.

"You got a little extra half step," Sterling says. "There were some rules around contact as well: You can’t touch the basketball when it’s in someone else’s hand, so it was a less physical game, and it was a less rough game."

Iowa began holding a statewide six-on-six tournament for its high school girls in 1920. That tournament became one of the first sporting events to be televised in 1951, and was eventually broadcast in nine states. Basketball was so popular for Iowa girls that by 1955, 7 out of 10 girls in the state played basketball in high school. 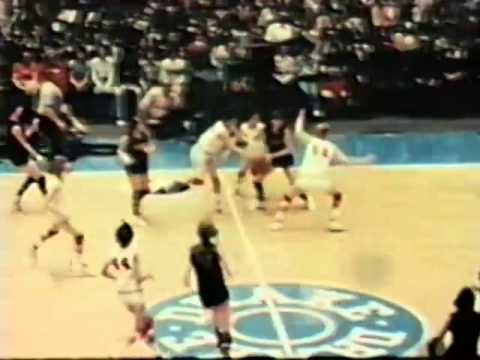 Even though most girls in United States at the time also played six-on-six, the game was something Iowans in particular took great pride in.

But that state tournament? It wasn’t about supporting female athletes, Koepnick says. It was about state pride.

"They wanted this culminating tournament, sort of, to be as — I don’t want to say flashy, but certainly as entertaining as possible," Koepnick says.

For all of Iowa’s support of its state tournament, basketball was, for many decades, the only option for high school girls. Only in 1955 did the Girls Athletic Union begin to include other sports — softball, then golf, tennis and track and field.

By the late ’60s and early ’70s, women across the country were starting to demand sports programs equal to those for men. Title IX, the landmark federal regulation that prohibited discrimination based on sex, became law in 1972.

After Title IX, most states created programs for girls’ five-on-five basketball. But Iowa held on to its six-on-six game. E. Wayne Cooley, the head of the Iowa Girls High School Athletic Union for 48 years, wrote to the governor of Iowa to say that he shouldn’t be worried about Title IX affecting high schools.

That year, three Iowa girls sued the Girls Athletic Union on the basis that six-on-six itself was discriminatory. By then, women’s college teams exclusively played five-on-five. So girls from Iowa high schools still playing six-on-six were at a disadvantage when it came time to play basketball in college.

After the lawsuit in ’83, the athletic union let each high school decide which style of basketball it would pursue.

"I ended up playing Division III college basketball," Sterling says. "I don’t think I did get noticed until I started playing five-on-five basketball."

It seemed like a no-brainer to switch to the kind of basketball that most of the rest of the country was already playing. In 1993, the athletic union finally voted to end six-on-six entirely. But the switch to five-on-five in Iowa came with some unexpected consequences.

"You might think because of the way the court’s divided, that it’s a slow game. But it’s not slow. It’s just a very exciting and unique game."

It’s a Saturday afternoon in December 2017 in Solon High School’s gym. The girls’ basketball team scuffles beneath the basket with less than a minute on the clock.  Instead of 3,000 to 4,000 fans packing the gym, only a few dozen people attend, mostly parents.

The game ends. The visiting team loses, 46–53. The crowd thins. Pizza is a dollar a slice now at the concession stand. This is what high school basketball is like in Iowa now.

"I never did like it when they went to the five-girl teams," says LaVerna Moser, one of the very few people in the world who still plays six-on-six.

LaVerna is part of the Granny Basketball League, an organization started in 2005 for women 50 and older. For Granny League players, there is a sense that something was lost when the state abandoned its six-on-six play.

Nationwide, Title IX has been incredibly effective at increasing female participation in sports. But Title IX also led to a loss of something that made Iowans feel special. In 1970, 20 percent of all female high school athletes in the nation went to school in Iowa. Six years later, just after Title IX, the rest of the country had started to catch up. Only 5.8 percent of female high school athletes were Iowan, much more in line with the state’s population.

But, if you’re talking about the decline in enthusiasm for girls playing basketball — the lack of fans paying attention to the game — the switch away from six-on-six might have had something to do with it.

LaVerna Moser’s daughter, Sharee Lind, plays on the same Granny League team as her mom. She, too, misses the six-player game.

"You might think because of the way the court’s divided, that it’s a slow game," Lind says. "But it’s not slow. It’s just a very exciting and unique game."

There’s still a sense of pride when it comes to six-on-six, especially for the women from small Iowa towns who played basketball in the ’60s and ’70s.

"I went to the last six-on-six state tournament," Lind says. "I got a button there that says, 'I heart six-on-six.' I mean, I understand, but I love the game."

It’s been 25 years since the last six-on-six game in Iowa. Basketball is no longer queen in the state, but neither is it the only game in town. In many ways, the story of girls’ basketball in Iowa is the story of the nation; adapting to changing times, looking back and moving forward all at once.