Early last month, Natalia Mehlman Petrzela, a history professor at The New School in New York City, was walking around her apartment.

"Just kind of procrastinating by checking Twitter," she says, "and I just saw that, all of a sudden, my whole timeline was retweets with various kind of enthusiastic commentaries, about, 'Oh my god. I can't believe Nike's doing this!' ”

This was the moment when Colin Kaepernick — the former Super Bowl-starting quarterback now better known for protesting racial inequality — was announced as the new face of Nike’s Just Do It campaign.

But while people in her timeline expressed surprise that Nike had aligned itself with such a controversial figure, Petrzela had a different reaction.

"I am a historian. I think historically. I’m always, like, where did this come from?" she says. "And, so, having spent a lot of time looking at Nike's ads, my first thought was: OK, this is totally part of this tradition of moving the needle with kind of controversial branding that places sports and athletics in the context of something bigger."

Petrzela says Nike’s tradition of socially-conscious branding goes back all the way to the ’70s.

"When they release their first women’s running line, they name the shoes after kind of all these quasi-feminist sayings. There’s 'The Liberator,' " she explains. "Today it all seems kind of cheesy, like, 'Big deal. Women’s empowerment branding.' But back then, you just didn’t have a lot of that."

Nike has run ads featuring Paralympians, runners who are overweight — or in their 80s.

And in 1994, the company reached out to a man named Ric Muñoz. They wanted to put him in a commercial.

"I said to myself, 'If they go through with this, it’s just going to be unlike anything that anyone has ever seen before,' " Ric recalls. "Just Do It didn’t really go into this territory. And then using a person nobody knew. 'Who is this guy? He’s a nobody. But he’s got a story to tell.' "

The Birth Of A Running Career

Ric Muñoz has always had good handwriting. That’s not why Nike wanted to feature him in a commercial, but it’s a good place to start his story.

"And you would think that there would be this super-duper closeness between the two of us. And it was actually the opposite," he says. "She didn't express affection. She just worked all day, came home, cooked dinner, and we went our separate ways."

So when Ric’s teachers started telling him he had nice penmanship, it mattered.

"The only people who could give me positive feedback were the teachers," he says.

Ric focused more and more on his handwriting. About a decade and a half later, the same sort of thing happened when he started running.

Ric was late to the sport — he was already in his 20s — but more experienced runners were quick to compliment him on his times.

"All the positive feedback from it really fed me and made me see what I was capable of," he says.

The early ’80s is also when Ric first learned about HIV and AIDS.

"It was bad," Ric says. "Close friends, acquaintances, people that I had personal, physical relations with — it was getting them. There was a men's group that I belonged to. We showed up one week and we said, 'Oh, where's' — I can't remember his name, 'You know, Larry?' And they said, 'Oh, Larry found out he had AIDS, and he swallowed a bottle of Drano. And everybody went, 'What?' It was just so shocking.

"One friend of mine went into the hospital on a Friday because he was feeling poorly. By Monday, three days later, he was dead. That was how quickly the whole thing happened. And so I just said, ‘I just have to wait. I guess I’m just going to wait for my turn to come.’ "

In 1987, at age 28, Ric decided to get tested. He wasn’t surprised when he got the results: positive.

"I didn't look at it as a death sentence so much as a challenge," he says. "It was, like, 'Who's gonna win? Me or the condition?' I pretty much just said, 'I'm just gonna do what makes me happy for as long as I can, as best I can. And when it comes time for me to go, then I'm gonna go.' "

And for Ric, what made him happy was running.

"I'd come to love the marathon distance," he says. "And training for a 26-mile race is a lot. The race itself is a lot. And there was a woman in our running club and she was a doctor and she said, ‘You know, Ric, I don’t think — maybe you should lay off the marathons, because that's really taxing on the body.’ And I said, ‘Yeah, you could be right. But I love this too much to let it go or let it affect me.’ And I just kept running."

And Ric kept getting faster. In 1989, he ran eight marathons. In 1990, he ran nine — and qualified for the Boston Marathon for the first time.

Before we get to what happens next in Ric’s story, I want to pause for a second to talk about the stigma associated with HIV and AIDS back in the ’90s. In 1994, Sean Strub started a magazine called POZ — it was about people affected by HIV and AIDS.

"We would put people on the cover of the magazine, we'd make 'em look glamorous, we'd have fashion photographers and make up artists, and we were criticized for that — glamorizing AIDS," he says.

Strub says his sister, who was the magazine’s salesperson, faced challenges landing ads.

"She finally got an appointment with a big, major brand vitamin company," Strub says. "We had all the data. People with HIV were consuming an enormous amount of vitamins. They told her, ‘We market our vitamins to well people, not to sick people.’ "

When people with HIV and AIDs were being talked about in the mainstream, they were usually being completely pathologized.

That was the climate when Ric Muñoz got a call in 1994 from someone at Wieden+Kennedy, Nike’s ad agency. They said they wanted to do an ad about a marathon runner with HIV.

“I didn't look at it as a death sentence so much as a challenge. It was, like, 'Who's gonna win? Me or the condition?' ”

"There were people who said to me, ‘You're really putting yourself out there. What about your job? What about future jobs?' " Ric recalls. " ‘The whole world is gonna know that you're HIV positive. You could get discriminated for your housing, for this and that.’ I said, ‘I'm willing to take the risk.’ "

Three weeks later, as he ran through Malibu Canyon State Park in front of a camera crew, Ric’s biggest concern was whether he looked like a dork.

After filming, Ric still worried that Nike would ultimately decide to pull the ad. But on Feb. 9, 1995, as he sat alone in his apartment watching that night’s episode of ER, Ric saw himself appear on his TV screen. 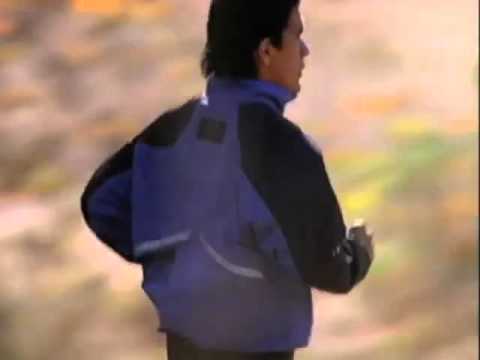 "The impact was very immediate," Ric says. "Within the next two or three days, stories in the New York Times praising it."

"It sent a signal," Strub says. "First of all, a signal to people with HIV — which I think is the most important one — by showing someone with HIV who is out there and doing and accomplishing and sort of leading a life while managing this illness.

"But it also sent a broader signal about, sort of, recognizing the humanity and the survival and the full lives of people with HIV — not just defining us as a virus."

"That kind of stuff matters," Petrzela says. "And I do think that Nike deserves some credit in that. This is the fundamental question that dogs Nike as so much of its advertising has been so adventurous is: how does corporate practice match up or not with that?"

Petrzela points out that although Nike sold those “Liberator” shoes back in the ’70s, there have been multiple allegations of sexual harassment and gender discrimination at the company.

And there were the reports in the early ’90s about the company’s labor practices abroad. A 1992 Harper’s article shared the story of an Indonesian factory worker making 14 cents an hour.

Petrzela says two things can be true at once: Nike can be a profit-seeking corporation that’s mistreated its employees here and abroad — and still deserve credit for running advertisements starring women, the elderly, adaptive athletes, Ric Muñoz, and now Colin Kaepernick.

"I actually think representation matters," Petrzela says. "I think the takeaway from the Nike story is that it's really up to us as critical consumers to decide the standards to which we want to hold companies. Because they're not going to do it for us. And actually, as becoming socially conscious becomes more and more marketable, it's probably going to be harder to discern which companies are actually living up to that and for which it is merely window dressing."

And for more on Ric Munoz, check out the story "Running For Life" at Running and Rambling.