Editor’s Note: This story includes details of violence. Please use your discretion.

The Quinault reservation is on the edge of Washington state’s Olympic Peninsula. It’s isolated — and, in the winter, it’s wet and dark. What knits the community together through the long winters is basketball. So, when something terrible happened to one of the Quinault’s star basketball players, it shook the whole reservation.

In May 2017, Cory Smith was sleeping in a hotel in Eastern Washington when the phone woke him up.

Almost two years later, there’s a lot we still don’t know about what happened that night. But what we do know is this:

Smith-Kramer was celebrating his 20th birthday at Donkey Creek, a campsite in the Olympic National Forest. His friends, also members of the Quinault Nation, and two white men got in some kind of dispute. The white men were driving a pickup truck.

The driver backed over Smith-Kramer and Anderson, put his car in drive and ran over them again.

All Smith knew at the time was that Smith-Kramer and Anderson were in the hospital in critical condition.

So Smith got dressed and started the five-hour drive back to the reservation.

Jimmy Smith-Kramer's mom died when he was only 4 years old. So Cory Smith and his girlfriend took Smith-Kramer in and raised him as their own son.

One of the things Smith taught his nephew was how to play basketball.

"Since he could walk, he’s just played basketball," Smith says. "I’d take him to 8-and-Under tournaments and he stood out. Worked hard, and he really took pride in playing defense."

When Smith-Kramer was in middle school, the captain of the high school basketball team took him under his wing.

“If I didn’t have basketball when I got here, I don’t think I would have stayed.”

"Jim’s eyes would light up. As a young kid, having an older kid — a star of the basketball team — come to your house and pick you up ... you know, I don't think he realizes what he done for Jimmy."

Basketball is really important on the Quinault Reservation. Smith says it feels like everyone goes to the high school games.

"They’ll bring their big pots of chili, they'll have their Indian tacos," Smith says. "It's just a good time. ‘I'm going to go watch basketball, and I'm going to eat dinner at the same time.’ "

The town of Taholah is the seat of the Quinault Tribe. It borders the Pacific Ocean on one side and woods on the other three sides. The whole town is about five blocks by five blocks. The one gas station is also the one grocery store — and also the only little cafe with some fast food and a couple of tables.

"There ain’t no malls around here," Smith says. "There ain't no movies around here, bowling alleys. There's none of that around here. These kids turn to picking up a remote control and playing Fortnite all night long or something, you know? Playing video games all night. And some kids, they might turn to drugs or alcohol."

"When I first moved here, I was bored," says Tyler Crossguns, who grew up on the Blackfeet Reservation in Montana and moved to the Quinault Reservation back in 2015.

"I was walking around one day through the town of Taholah looking for something to do, and all's I could hear was basketballs dribbling every block," Crossguns says. "And I started nosying around, walking all over. And I ran into a group of kids playing basketball."

Crossguns joined in. Pretty soon, he was playing basketball every day.

"If I didn’t have basketball when I got here, I don’t think I would have stayed," Crossguns says.

"I was pretty athletic when I first got here," Crossguns says. "I had good knees. You know, I was in physical shape. And some senior class kids — Jimmy Smith-Kramer was one of them — he took on a challenge. He wanted to play against me. And, you know, we dunked on each other every day on the short court. We just battled, battled, battled. Me and Jimmy go back quite a ways."

Smith-Kramer's sophomore year, the Taholah Chitwhins made it to state, and the tribe paid for charter buses to bring everyone who wanted to attend the game all the way across Washington to watch. The bleachers were full of Taholah fans, including Cory Smith. The Chitwhins were down.

"They were running out of time, and Jimmy grabbed it," Smith says. "You know, he was beyond half court. He threw it up 80 feet, probably 70 feet — I don’t know." 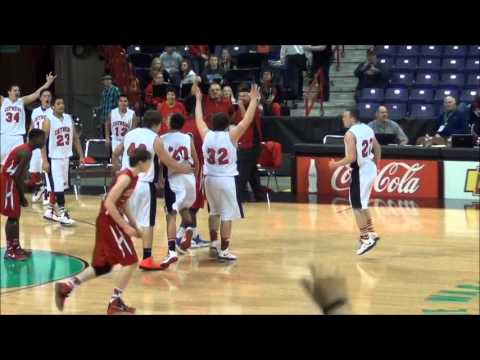 The Chitwhins lost the game by one point, but ...

"When he when he hit that shot, there was a lot of elders there. A lot of them were in tears," Smith says.

"Everything [Smith-Kramer] did, he was good at," says Mike Rose, the Chitwhins’ head basketball coach when Smith-Kramer was in high school. "He was in the spotlight all the time. All the kids knew him. Everybody knew him. The fact that he was so good made his presence more noticeable."

After Smith-Kramer graduated from high school, he got work as a commercial fisherman. He and his girlfriend had twins — a boy and a girl.

He was trying to get into community college and onto a basketball team. In the meantime, he and his best friend kept showing up at the high school to help coach.

Coaching high school students wasn’t the only way Jimmy Smith-Kramer gave back to the community. He had a reputation as a good hunter. He’d give away the deer and the elk he shot to elders and others who needed the meat.

Taking care of others was what he did the night of his 20th birthday, too.

When the argument began between Smith-Kramer's friend, Harvey Anderson, and the two men in the pickup truck, Smith-Kramer wasn’t involved. It wasn’t until that pickup truck was headed toward Anderson that Smith-Kramer rushed over to try to save his friend.

"When he tackled Harvey, he took the blunt force," Cory Smith says. "He saved Harvey’s life."

“When he tackled Harvey, he took the blunt force. He saved Harvey’s life.”

Smith-Kramer was on life support when his uncle got to the hospital.

"He was gone, but he wasn't gone. He still had a heartbeat," Smith says. "So I stayed with him. Rubbed his feet, rubbed his legs — something I did for him, you know, growing up. Playing basketball, football, baseball, track — whatever sport he was doing, I always rubbed his legs and rubbed his feet after games, 'cause he’d cramp really bad. When he's laying in that hospital bed, I kept watching his heart monitor. I would rub his feet — you know, hoping, just hoping, there's something. And there was nothing.

"Some of the hardest times in my life was sitting there watching my boy die."

Smith made the decision to take his nephew off life support and donate his organs. Harvey Anderson lived.

The news reached Coach Mike Rose the next day.

"It was shocking when I heard," Rose says. "I remember, I was just so depressed,  because I’d just seen him not that long ago. And it seemed like just the other day he’d been with our practice and everything. And now he was gone. It was such an emptiness that just couldn’t be filled again."

Law enforcement originally charged the man who ran over Smith-Kramer with murder, but they downgraded the charge to manslaughter. In the end, he was sentenced to seven and a half years.

People on the Quinault Reservation are still upset about that. They see what happened as murder and a hate crime. I saw #JusticeForJimmy bumper stickers as I drove around the reservation.

"What if things were reversed?" Smith wonders. "What if these Indian kids ran over this white man? How would things be settled in court?"

The Taholah community didn’t get closure in the courtroom. So they had to say goodbye in their own way — on the basketball court.

Last season, the high school team wore Smith-Kramer's No. 5 on their shoulders all season.

As for the No. 5 jersey itself, Tyler Crossguns says the players were always fighting over it.

But the players can’t fight over that jersey anymore. At the end of last season, the school retired it.

"The gym was so packed. It was crazy," Cory Smith says. "There wasn’t even place to sit down. There was people standing along the walls. There was people packed in the doors. It was a full game. They did all say their goodbyes. And they knew that his heart’s still there."

And, even though kids on the Quinault Reservation can no longer wear the No. 5 jersey, they still want to be like Jimmy Smith-Kramer.