Derrick Etienne Jr. remembers the exact moment he knew he wanted to be a professional soccer player. It was 2002, and his dad, Derrick Etienne Sr., had just won a championship playing with the Long Island Rough Riders.

Today, Derrick Jr. is a 22-year-old forward for Major League Soccer’s New York Red Bulls. He’s also the bright, young star of the Haitian national team. For the Etiennes, soccer is more than just a game. It’s the family business.

I caught up with the Etiennes after practice at the Red Bull’s training facility. The two men operated as one — finishing each other's sentences and teasing each other with inside jokes.

To start the interview, I asked Derrick Jr. what his dad was like as a coach.

I asked Derrick Jr. for an example.

"Oh, he knows what time I'm going to talk about," Derrick Jr. says. "We were playing indoor at Teaneck Armory."

Derrick Jr. was playing terribly. After the game, he found his father in the stands and asked how he had done.

Turns out, not having to hear his father's mouth was a big motivator for Derrick Jr.

"Yeah, I think when I was younger, I was like, 'Yeah, just go out there and play well so you don't have to hear this guy yell at you,' " Derrick Jr. says.

'Chip Off The Old Block'

After a successful youth career playing for the Red Bulls Youth Academy, Derrick Jr. was recruited to play Div. 1 soccer for the University of Virginia.

Dad had played for Virginia Commonwealth University. One of UVA’s biggest rivals. Derrick Jr. knew it would be a big moment for the family when the two schools played each other in September 2015.

"I already had that in my mind," Derrick Jr. says.

Derrick Jr.'s sister was at the game. She was a cheerleader for VCU.

But, again, Derrick Jr. wasn’t playing well, and his coach briefly subbed him out in the second half. So when he went back in, his mindset was like...

Derrick Jr. got the ball and started dribbling.

"It was just like the Red Sea, just like a little split, and I just kept running."

"It was just like the Red Sea, just like a little split, and I just kept running," Derrick Jr. says. "It was crazy, because I realized 'Yo, you dribbled past seven players and chipped the goalie — like, in front of your dad and your sister.' Her friends got mad at her because she went like this, put her pom-poms up. They're like,'Yo, that's not our school.' "

"I was, like, you know, first reaction was, 'Yeah!' " Derrick Sr. remembers. "Then I was like, 'Oh, this is VCU.' You know, this is my alma mater. So it was bittersweet. As a VCU alumnus I was, you know, crushed, because it was the game-winning goal. But as a dad, it was a big moment.

"And I'm like, he's a chip off the old block — scoring the big goals in the big games."

After one season of college soccer, Derrick Jr. turned pro with the Red Bulls. And one year after that, he got his first senior call-up with the Haitian national team. But to understand what this moment meant to the family, we have to go back in the timeline.

"Yeah. Well, you know, my dad," Derrick Sr. says, referring to Derrick Jr’s grandfather, "he was the oldest of, I think, six siblings. And when a father is not in the house, the older brother is the dad. So he had a responsibility. He used to play soccer — was playing professionally in Haiti — but wanted to try to get a better life for the family. And so that's how he ended up coming to the States with $19 in his pocket."

Derrick Sr.’s father sacrificed everything to build a family in America — including his professional soccer career.

"We kind of get emotional about it when we think about it, because everyone tells us how great of a soccer player he was," Derrick Sr. says. "And he sacrificed his dream, to play and wear the colors for Haiti for the rest of the family."

"That's pretty much our family mantra: faith, family, and football."

Derrick Sr. and his twin brother both represented Haiti. But, in his day, Derrick Sr. says they were playing on dirt fields. And although he played and even scored for Haiti, he only made a handful of appearances.

Growing up, Derrick Jr. didn't dream of playing for Haiti.

"Well, being in America, I wanted to play for the U.S. because, you know, I really didn't see Haiti play on TV," Derrick Jr. says. "I wanted to play at the highest highest level possible. And, you know, I went to some camps. And, yeah, I felt like I could be called into more, but I wasn't. That was their decision. Haiti called me and I was like, 'Yeah, I'll come.' "

But when Derrick Jr. arrived in Haiti for the first time, it was a complete shock to him.

"Oh, yeah, I didn't speak any Creole whatsoever," Derrick Jr. says. "Because [my dad] doesn't speak Creole, because my grandfather was always working and stuff. So he wasn't there a lot to help him learn the language."

That first visit was shortly after the Earthquake in 2010.

"Whenever I put on that jersey, you know, there's a lot of pain here," Derrick Jr. says. "But, when we play soccer, everything stops. And it's all about the football. So, yeah, I think it adds an extra incentive to play well."

For the Etiennes, it all came together this summer, when Haiti competed in the Gold Cup, a tournament featuring all the best teams in North America.

"Twenty years ago, I didn't make the final Gold Cup roster," Derrick Sr. says. "So that's why him just playing in this Gold Cup was crazy for me. Because it's, like, 20 years later, he's doing what I didn't do. And that's what I always set for him, is to always supersede."

Haiti won its first two games against Bermuda and Nicaragua. They would face Costa Rica in the final game of the group stages, at none other than Red Bull Arena. 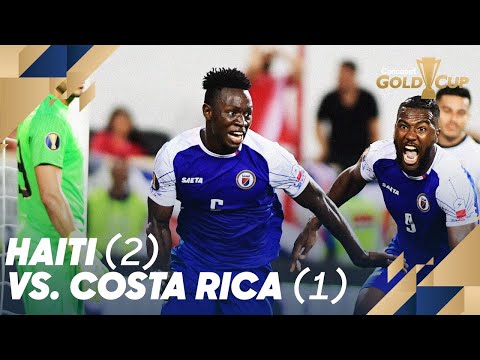 Haiti won the game on a goal by 21-year-old Djimy Alexis.

"Honestly, that's probably the first time that I cried for a result — a result in my favor, I guess," Derrick Jr. says. "But it was just all the emotions of, you know, doing history for the national team."

Haiti went on to upset Canada in the quarterfinals, but lost 1-0 to eventual Gold Cup champion Mexico in overtime in the semifinals.

"You got the lump in your throat, didn’t you?" Derrick Jr. says.

"I got the lump in my throat, yes," Derrick Sr. replies.

Before ending the interview, Derrick Sr. wanted to clear something up.

"Let me put some context to the madman thing, OK?" Derrick Sr. says. "Because, quite honestly, I don't feel that I was a maniac. I'm not like that out of control dad. I'm not, you know, Venus and Serena Williams' dad. But, yes, it was very demanding."

"Notice though, since he's been a pro, I've leveled out, you know. I've calmed down," Derrick Sr. says. "I'm not as critical, because I respect what he's achieved and what he's accomplished. So I'm no longer instructing him. Unless he wants it. Because, trust me, if he listened to my instruction, you'd have 10-goal seasons every single year."

Arlo Moore-Bloom helped with this story. Since retiring from professional soccer, Derrick Etienne Sr. has served as a Pastor for the The Latter Glory Church in New Jersey.

Niko Emack Assistant Producer, Only A Game
Niko Emack was an assistant producer for NPR’s "Only A Game."