Ben Zauzmer was 11 years old when he figured out what he wanted to do with his life. It was 2004, and Ben and his dad were on a road trip from Philadelphia to Fenway Park in Boston.

As they set out on the six-hour drive, Ben and his dad popped in an audio book:  "Moneyball" by Michael Lewis.

"Michael Lewis was the first one to expose how a few front offices were starting to use mathematical models in their decision-making process," Ben says. "And as a young child, it was revolutionary — this idea that someone like me, who loved numbers but couldn't hit or pitch or catch, could have some place in the game of baseball that I loved was an extraordinary thought.

"The description of Billy Beane sitting there in the draft room seemed to 11-year-old me like the most exciting scene ever."

By the time Ben Zauzmer and his dad arrived back in Philadelphia, Ben had decided he wanted to work in baseball.

And he did plenty to make that a reality. In high school, he interned with the hometown Phillies. He went to Harvard, where he studied applied math and computer science. (Full disclosure: I first met Ben in college when we were both covering the men’s basketball team — him for the college radio station, me for the student newspaper.) After his freshman year, he interned at baseball-reference.com.

Ben was working to earn himself a seat at the table in an MLB draft room.

Little did he know he was also preparing himself for a very different type of draft.

Last fall, about a decade and a half after Ben went on that road trip with his dad, Los Angeles Dodgers third baseman Justin Turner and Brandon McDaniel — the Dodgers director of athletic development and performance science — had a problem.

"Me and Brandon have had a notorious record for slow starts and injuries," Justin says.

Justin's not referring to his performance on the baseball field.

In 2017, Justin was an All-Star and the NLCS MVP. He’s got a bushy red beard and a playful personality — and he’s been one of the leaders of a Dodgers team that’s reached the World Series the last two seasons.

When Justin says “slow starts,” he's talking about the team he and Brandon share in the Los Angeles Dodgers' fantasy football league.

"It seems as if we always end up with one of the better teams by the time the playoffs roll around," Justin says. "However, we usually fall a game short of making the playoffs."

The Los Angeles Dodgers take fantasy football seriously. According to the L.A. Times, a Dodgers player once orchestrated a fantasy football trade during batting practice before a playoff game.

"It's a very big deal," Brandon says. "Obviously, a lot of Type-A personalities around here that are very competitive."

"There's a decent prize at stake at the end of the year," Justin says, though he declined to go into specifics.

"I'm not going to get into that, but it's worth it," he says with a laugh.

(Just for context, three years ago Justin signed a $64 million contract, and yet he told me the worst part of missing the fantasy playoffs is losing a shot at the cash prize — so you can imagine what "worth it" means.)

The league is made up of 12 teams. Most are owned by Dodgers players. One is run by the Dodgers' clubhouse attendants.

But the league has also featured entrants from the Dodgers front office.

"What those front office guys do for a living is put together teams and select players," Justin says. "So, you know, there's definitely some trash-talking advantages if you can take those guys down and be better than them at their job."

Except, in 2015, 2016 and 2017, Brandon and Justin and the rest of the Dodgers players were certainly not better than then-Dodgers general manager Farhan Zaidi at his job. Farhan won three straight fantasy championships — a stunning threepeat in an endeavor involving so much chance.

Justin and Brandon, meanwhile, missed the postseason all three years.

"I'm not going to say we were chasing Farhan — we were just trying to get in the playoffs," Brandon says.

He and Justin needed some help.

Then, around the start of the 2018 fantasy football season, Brandon got promoted from his job as a strength and conditioning coach to director of athletic development and performance science.

And that’s when he met one of the Dodgers’ young analysts.

'A Match Made In Heaven'

Ben Zauzmer graduated from Harvard in 2015 and landed in the Dodgers' research and development office.

"That’s the heavy statistical side of the organization," he says.

Ben’s job consisted almost entirely of working with the Dodgers’ other analysts. He was pretty separate from the players, besides occasionally passing them in the hall.

But that was all about to change. Because when Ben met Brandon McDaniel, they started talking about fantasy football.

"Ben was telling me about this, like, league that he was in and he was just babbling off all kinds of fantasy football stuff," Brandon says.

Brandon got an idea.

Ben thought: "Why does Brandon McDaniel want me to come to the locker room?"

"And there he was," Ben says, "with Justin Turner."

"I introduced myself to Justin Turner," Ben says. "Very nice guy. We got to know each other pretty quickly. We started talking fantasy football, and they explained that they wanted me to help out with their fantasy football prep."

"My first impression was like, 'Wow, we have a real advantage here,' " Justin says.

"Kind of seemed like a match made in heaven," Brandon adds.

At first, Ben figured Justin and Brandon just wanted to chat about some potential draft picks. But it turned out they had more in mind. Much more. They wanted Ben at the table at the fantasy football draft.

There was one small problem. The draft was going to be held at star pitcher Clayton Kershaw’s home in Texas while the Dodgers were on a road trip.

Ben, in his role with the research and development department, didn’t travel to away games.

But Justin and Brandon had a plan.

"They said, 'All right, we're gonna fly you to Dallas. The draft is next week,' " Ben says. "And I laughed, ‘cause I assumed they were joking. And then they made it clear: no, they were in fact serious, and I was expected in Dallas shortly."

Secret Flight ... And The Draft

In the week leading up to the draft, Ben pulled double duty. During the day he did his job trying to help the Dodgers win the World Series. At night, he’d do football research and chat with Brandon and Justin to prepare for the fantasy draft in Texas.

"Brandon and Justin wanted it to be a secret for as long as possible, so instead of joining on the team plane, I took a separate flight from Los Angeles to Dallas," Ben says.

Justin and Brandon took care of the travel costs. I asked Ben if they sprung for first-class tickets.

"It was not first class, but it was still a very nice flight," Ben says. "No complaints."

Ben checked into this room at the team hotel (he was instructed to duck in the halls to avoid notice). Then he ubered with Justin and Brandon to Clayton Kershaw's house.

Ben’s introduction to the three-time Cy Young winner was captured on camera by SportsNet LA for a show called "Backstage: Dodgers." 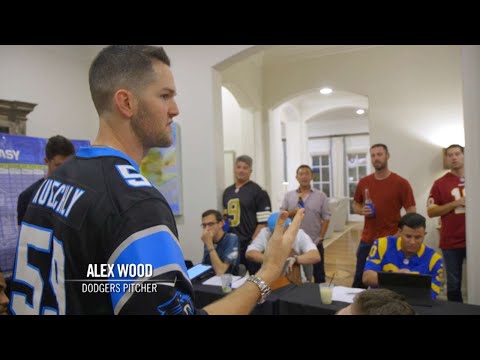 "It was just surreal," Ben says. "Honestly, if the crew for 'Backstage: Dodgers' hadn’t been filming this I might not have even believed that it happened."

But Ben had to stay focused — after all, he had an important job to do. When the draft began, he had his laptop out. Justin Turner and Brandon McDaniel flanked him on either side, so they could peer over his shoulder at the computer.

Coming out of the draft, the trio felt good.

But the team's top running back — Leonard Fournette — ended up struggling with injuries.

When the playoffs came around, Justin and Brandon were once again on the outside looking in. They fell short by a single game.

I asked Ben if he was a little worried about his job security.

"Well, from the end of the season, Justin and Brandon were saying things with the phrase 'next year,' implying to me that I at least got one more year to give it a shot," he says.

'Fully A Part Of The League'

So for this year’s edition of the Los Angeles Dodgers' fantasy football league, Ben Zauzmer was back in the draft room with Justin Turner and Brandon McDaniel.

This time, Ben didn’t have to take a separate flight or sneak around any hotel hallways. Ben recently moved over to the baseball operations department. He still works primarily with numbers, but now he interacts with the Dodgers players — in non-fantasy football settings — and sometimes travels with the team on road trips.

And in the weeks leading up to this year’s draft, he says players and coaches came up to him to talk about fantasy football.

" 'Cause now I guess I'm fully a part of the league," he says. "I ... still have to pinch myself when I get to sit there at the table with the Los Angeles Dodgers playing fantasy football."

"And what's your relationship like with Justin Turner at this point?" I ask. "Are you guys friends now, would you say?"

"Uh, so we're definitely fantasy co-owners," Ben says with a laugh. "And he's a really great guy, and we certainly enjoy talking to each other about fantasy."

Brandon McDaniel says he doesn’t expect the three of them to go on triple dates anytime soon, but he says that he, Ben and Justin Turner — or J.T. — enjoy being around each other. And they do have a group text message.

"Just the other night, we were on a text thread, and J.T. asked me to send him a workout real quick, before the off day," Brandon says. "And I wrote on there and said, 'Hey, Ben. You got to do this one, too' — just giving Ben a little bit of crap because he works out with us every once in a while in the weight room."

The message was filled with abbreviations for different workouts.

"And Ben said, 'Yeah, I'll do it as soon as you can tell me what any of this stuff means,' " Brandon says.

'I Don't Think I'm Any Better At Math'

Is it possible this fantasy football collaboration will actually help the Dodgers on the baseball field by bringing together players and stat heads?

Justin Turner says he’s always been a fan of analytics. Still, he says it doesn’t hurt to get to know one of the guys behind the numbers.

"You know, [to] put a face to the information I’m getting has been pretty cool," he says.

"Has it improved your math skills at all?" I ask.

"No, I don’t think I’m any better at math," Justin says with a laugh. "But you’re kind of seeing through a lens of how he views things in a different sport. And so it kind of helps you understand the stuff they’re putting together for us on the baseball field."

And 15 years after he first read "Moneyball," Ben Zauzmer can now confirm that being in the room for the MLB draft is just as exciting as it seemed in the book.

"Every morning I drive into Chavez Ravine at Dodger Stadium and still think, 'Oh, my gosh. I get to go to work at a baseball stadium.' It's a pretty wonderful feeling," he says.

The only thing he needs now is a World Series.

The Los Angeles Dodgers will enter the MLB playoffs with the National League’s best record. More importantly, heading into the weekend, the fantasy football team run by Justin Turner, Brandon McDaniel and Ben Zauzmer had a 2-1 record.