On Aug. 16, 2014, Dave Mackey lined up for the final event of the Leadman challenge.

An elite ultrarunner, Mackey had already completed a marathon, a 50-mile run, a 100-mile bike ride, and a 10K run. But this, the final event, would be the most challenging: a 100-mile trail run. Nineteen hours, 10 minutes and 45 seconds later, Mackey finished.

For completing the race in under 25 hours, Mackey earned a highly coveted Leadville 100 belt buckle.

The finish placed Mackey second overall in the 2014 Leadville Race Series. The only person who finished the five events faster: his good friend Bob Africa.

But Mackey would soon face a far more serious challenge.

On May 23, 2015, Dave Mackey was out doing what he’d done for years: training on the trails near his Boulder, Colo. home. But in a matter of seconds on that beautiful spring day, everything changed.

"I stepped on a large loose rock, which was about 300 pounds," Mackey recalls, "but it levered out of the soil and proceeded to send me, basically, out into outer space. And I just, basically, started to tumble off the back side of the peak.

"I tried to control my fall. I was able to kind of spin around and grab the side of the mountain. And I was grabbing branches, grabbing rocks, grabbing dirt, trying to control my fall and freefalling for probably about 10 feet, and landed on my back on a space about the size of a child’s mattress. But I landed on my back there, and it wasn’t like landing on a mattress. It was like landing on hard dirt and rock. And I remember just leaning forward and looking at my legs, and there was the rock. And it came down and tumbled onto my left lower leg."

One of Mackey's friends happened to be running nearby. He heard Mackey's screams and, within about a minute, was there to help. He managed to lever the rock off, but what that revealed was disturbing.

"I had this open tibial fracture," Mackey says. "The skin was torn open, there was — I could see the bone pieces. And right away I knew I had a big problem."

The rescue was treacherous. It took hours to evacuate Mackey and get him to the hospital, where he went into surgery to fix his lower left leg. What no one knew at the time was how much bacteria had gotten into the wound at the site of the accident.

"The bone pieces actually ended up dying," Mackey says. "They had to pull those out, so I was left with, basically, a dysfunctional leg. I didn’t have a bone in there. No tibia, then you can’t walk. I proceeded to have 13 surgeries over the next year and a half. There was bone grafting, muscle grafting, skin grafting."

Mackey needed a cane to walk. He was in chronic pain. A return to ultras appeared impossible. Unless he chose to amputate.

'I Knew That My Life Would Never Be The Same Again'

"When I finally decided that, it was actually somewhat of a sigh of relief," Mackey says. "It was a feeling of weight lifted off my shoulders. Because I knew the infection would be gone. I knew all those problems and surgeries and indefinite outcomes would be basically gone with one surgery.

"I had the surgery on Nov. 1, 2016. Which, as you can tell, is the day after Oct. 31, which is Halloween. So the night before the surgery we had — I invited all my friends to a leg amputation party on Halloween night at the local running store, and we had a big party. And the next day I lost my leg.

"If I could do that with one leg, I could pretty much do anything."

"I remember going under anesthesia. And, as the nurse literally put the gas over the mouth to take some deep breaths, I remember tears rolling down my face. And I woke up within a couple hours. And I remember looking down, and I had one whole leg. And the other leg is under the covers, and there’s a stump under there. And I knew that my life would never be the same again."

Before Mackey even left the hospital, before he’d learned to walk or hike or run, he set his sights on returning to the Leadman, that five-event series that finishes with a 100-mile trail race.

"I saw that series as the pinnacle, more or less, of possible recovery," Mackey says. "If I could do that with one leg, I could pretty much do anything."

And if it seems a bit crazy that Mackey would focus on completing such a huge feat over relentless mountain terrain on one leg — even before he’d learned how to take a single step — Mackey wasn’t the only one who thought it was possible. Mackey's friend Bob Africa visited the hospital the day after the surgery and gave Mackey the belt buckle he’d earned at the 2014 Leadman, when he and Mackey had finished first and second.

Over the next six months, Mackey set to the arduous, often painful, task of refining the fit of his prosthetic and learning how to walk and then run with it.

"I was probably a little too ambitious," Mackey says. "I first went for that run, and I went out too hard. I completely abraded and chafed my leg up, but I wasn’t sidelined. I was just limping around the next day. But that was a good thing. It’s part of the process. Take a step back, but you’re taking two steps forward. And that’s basically how it was for a year." 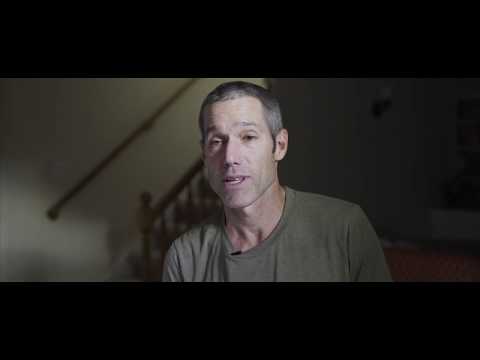 Fourteen months post-surgery, Mackey lined up for a 50K race (about 31 miles), his first ultra since the accident.

"It was an awesome, cathartic experience to cross that finish line," Mackey says. "I wasn’t in tears crying in the dirt. But it was a deeper, more spiritual experience than I’d probably outwardly showed. It felt really darn good to do it."

"The fall should’ve killed me," Mackey says. "Never mind the rock, never mind it landing on my leg. I fell 60 feet and, on any other day of the week, that would have killed me. I would have landed on my head. I would have broken my neck. And I didn’t. And I feel like when I’m doing these things that I did before that I love, I feel like I appreciate those things even more."

As good as that may have felt, it was only preparation for Mackey's ultimate goal, that Leadman series, which would start five months later. But going into the first Leadman event, the marathon, Mackey says he was scared.

"The fall should’ve killed me."

"Running on a prosthetic running blade, which is basically a boomerang-shaped piece of carbon fiber that just basically sticks onto the socket, and running around the mountains in Colorado with those things — it’s a super technical course," Mackey says. "There’s cobblestones all over the place. There are things to fall on and get potentially injured.

"I thought that I might just fail right here in step one of the Leadman series. And everything just came together really well, though. I had a great run. And I was ecstatic after the trail run."

Next in the series, Leadman athletes have a choice to complete either a 50-mile mountain bike race on Saturday, or a 50-mile trail run on Sunday. Mackey did the bike race. But then...

"Pretty much on a whim, the next day I decided to do the 50-mile run," Mackey says. "I wanted to see what I could do. And I felt like crap. I felt terrible after that. You know, two 50-mile events back-to-back on a prosthetic. Not in my wildest dreams did I think I could complete that.

A month later, Mackey tackled the 100-mile mountain bike race and the 10K run with confidence. But it all came down to the final and most brutal event: the 100-mile trail run.

From 'Depths Of Hell' To Hope Pass

During the first half of the race, Mackey says his upper thighs were exhausted. When he reached his support crew at the 50-mile mark, things were not looking good.

"I felt like trash," Mackey says. "I was going at a slow walk. I was shuffling and I just sat down in the chair. I plopped down and I looked around. And I was like, 'I don’t think I can get out of this chair.' And, after 10 minutes of sitting there, I knew just getting up and walking one step at a time — maybe things would turn around."

Mackey left the aid station at a walking pace. Just over five miles ahead was Hope Pass, the highest point in the race at over 12,000 feet.

"I got my energy back and started to feel really good, which is a surprise," Mackey says. "But in these races you surprise yourself. You go through literally the depths of hell, and then you find yourself on a mountain summit, and you feel like you’re on top of the world. And you feel great.

"And then you have another depths-of-hell experience later in the race, but then you get through. I got to the top of Hope Pass, and I knew at that moment — it was like the parting of the Red Sea. It was like, 'My path is clear. I’m going to do this.' "

Mackey finished the Leadville 100 trail race in 24 hours and 54 minutes. With that, he earned himself another belt buckle. And he became the only one-legged athlete to complete the Leadman.

"For me, it was completing the return to who I was, as a person who had lost his leg, a person who was trying to be as much of a whole human as he was before, even though he’s missing his lower limb," Mackey says. "You know, my kids ran to the finish line with me. And Ellen was there — my wife. And it was a life-changing experience I’ll never forget."