When 12-year-old Jon Dorenbos woke up for baseball camp on the morning of Aug. 3, 1992, two things were unusual: first, all his gear was out on the table — not where it normally was in the garage. Second, his dad was there, but not his mom.

"And I didn’t think anything of it," Jon says. "And, at 12 years old, I don’t think you read too much into stuff like that."

Jon got a ride from some friends. Later on, while he was at camp, his coach approached him.

Jon thought maybe his dad had gotten hurt playing soccer. There’s no way he could’ve predicted what had really happened. Because, as far as he knew, he’d grown up in a happy family.

Jon says he and his family spent a lot of time together.

"We went camping. We did the yard work. We hung out. We did art stuff at the house. We'd watch movies together," he says. "As far as I knew, we lived in the Brady Bunch family."

Jon’s dad was the president of his Little League in Woodinville, Washington. They’d play catch every day.

Jon remembers seeing his dad coming into the kitchen to find his mom.

"He would grab her and sneak her away, and they would go into the pantry and close the door and turn the light off," Jon remembers. "And never once did I ever wonder what they were doing in there. And then I got older, and I was like, 'Oh, my gosh! They were totally making out.' "

So as Jon was driven from baseball camp to the police station, he was unprepared for what he was about to learn.

And just a warning that what you’re about to read is disturbing.

"They said, 'Your parents last night got in an argument, and your mom was pushed down some steps, and she didn't make it,' " Jon remembers hearing. " 'And right now your dad is in jail, and he's being held for questioning. And we're trying to get answers and figure out what happened.' 'Wait, what?' 'Yeah, your parents got in an argument, and your mom died.'

"You don’t really know how to react to that, right? So you’re just sitting there, and you just get cold. And I couldn’t tell you if I was in that room for five minutes, an hour, all day. I mean, I have no idea.

"And, at that time, you know, I don't think there was a lot of information. And I think they didn't really know what to tell me. And the reality was, my mom was not pushed. My dad used a bench grinder and a sledgehammer. And it was bad. And it happened in the garage."

Jon’s father had spent the previous night trying to clean up the evidence. But after Jon left for baseball camp, he turned himself into police.

Jon didn’t know it then, but that concern for his family name would drive many of his decisions in the years to come.

Jon’s father was convicted of second-degree murder and sentenced to 13 years and 8 months in prison. Jon was there throughout the trial.

Almost a year after the murder, Jon and his sister moved to Southern California to live with their aunt.

Jon cut off contact with his dad. He wouldn’t see him for another 26 years.

Not long after the move, Jon returned to Washington for a Little League All-Star tournament. He stayed at his coach’s house.

"And the neighbor across the street was a 16-year-old magician," Jon says. "And so they said, 'Hey, look, this kid’s been through a lot. Maybe you can just come over and do, like, 30 minutes of magic. And maybe it will cheer him up.' So, sure enough, the kid comes over, and it just — it got me.

"You know, he lit a match and looked at it, and the flame went, like, 10, 15 feet high. He took a sponge ball, he put one sponge ball in my hand, he took one, it disappeared, and when I opened my hand, I had both of them. It was just this cool, cool world of, like, 'How is this possible? It's magic.' From that moment on, I was hooked.

Jon got good quickly. Because he didn’t want people noticing his chewed up fingernails, he developed a fast pace.

In the 8th grade, he won his school’s talent show. He then started at Pacifica High School in Garden Grove.

"So I'm in high school," Jon recalls, "and my buddy comes up to me and says, 'Hey, you know, you're a big kid. You should play football.' 'No way, man. Football's for dorks. I like magic.' And then, sure enough, he's like, 'But you can hit that guy and not get in trouble.' Look, I had a lot of anger built up in me. I had a lot of questions and a lot of resentment."

So Jon joined the football team. He played linebacker. And he loved that, too.

"And I had these two outlets: shuffle cards — I'd listen to track number nine on repeat, 'Felitsa' from Yanni — all night. And then, during the day, I would play football, right? It was just this perfect balance," Jon says.

Magic was Jon’s escape. But sports gave Jon a sense of family — and, he thought, a way to bring positive attention back to his family name.

"When you play sports, you have your name on your back, and the whole world can see it," Jon says.

Jon could’ve pursued college baseball, but he was set on football. He wanted to be a rock star — and run out onto the field for a Division I team in front of 100,000 people.

But there was a problem with this plan.

"Look, here's the deal: I thought I was the greatest high school player ever. Clearly, obviously," Jon jokes. "Problem is, apparently not one college coach agreed with me. And, so, no offers, no looks."

Jon says there were some good junior college teams that wanted him. But the one that got his attention was called Golden West in nearby Huntington Beach.

Jon thought of something a coach had told him: "All you gotta do is get on the field, and they'll find you."

So Jon played for Golden West. They lost another 10 straight. But he was still set on playing Division I football.

"So I asked the coaches for some game film, and I was going to put together my own highlight tape and send it out," Jon says. "And so I made my highlight tape, and it was good."

But Jon figured it would be even better if he worked some VCR magic and edited in a few plays from his Golden West teammate who was a harder hitter.

"You know, the film's a little grainy, and who could tell who's who?" he says.

Jon also edited in some clips from the team’s long snapper — that’s the guy who hikes the ball for punts and kicks. It’s a highly skilled position that Jon had played in high school.

"So now I've got a highlight tape with a lot of my highlights, a few of Nick [Heinle]'s big hits, and then a few of Tim [Thurman]'s really, really good snaps," Jon says. "So, sure enough, I got a scholarship to be a long snapper."

Jon was headed to the Division I University of Texas at El Paso to long snap.

"Figured out how to do it really, really quick. And I had a knack for it, but I had to fine tune it," he says.

Jon says he wasn't scared of being discovered as a fraud.

"Because I truly didn't view myself as a fraud, you know?" he says. "And I think that's kind of important to say. 'Cause I knew I could do it. I had done it in high school. I knew I was good enough to play at that level. And I felt like I deserved to be there."

Whether or not he really "deserved" to be there, Jon definitely was good enough to play Division I football.

After three seasons at UTEP, he was considered a top NFL long snapping prospect.

He thinks the time he'd spent on magic helped him become a great long snapper.

"Magic, actually — it got me obsessed with doing something over and over and over in search of the perfect rep, but loving that process," he says. "That's what magic's about. And that's what snapping's about. It's about taking something and just doing it 10,000 times, a million times, until it's right."

And the whole time, Jon kept up the magic. He’d perform card tricks for his teammates in the locker room.

And ahead of the 2016 NFL season, Jon auditioned for the TV show "America’s Got Talent."

He didn’t tell the Eagles — he figured he’d either drop out or be eliminated or opt out before it started to conflict with his day job.

But, during one of the early tapings, Jon got the golden buzzer. That meant he was fast-tracked to the show’s later rounds. 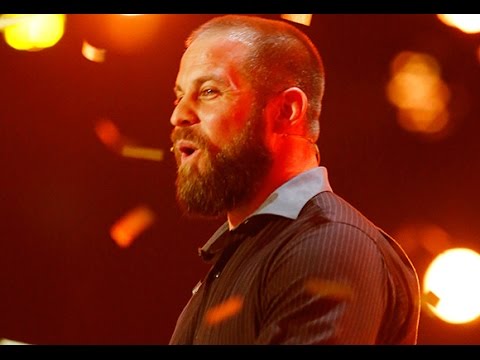 So, as Jon got ready for Eagles training camp, a few episodes of the show had already aired, and he still hadn’t had a conversation about it with the Eagles.

"NBC thinks the Eagles just excused me from training camp," Jon says. "Now, meanwhile, the Eagles have no idea what's going on. And so I was like, 'Oh, gosh. Here we go. I don't know what I'm going to do. Like, OK, I'm just going to show up to training camp, and we'll see what they say.' "

When Jon arrived, Jeffrey Lurie — the team owner — and other Eagles higher ups were there.

"And they said, 'Why didn't you tell us you're doing this? This is awesome,' " Jon recalls.

They wanted Jon to keep competing on the show, even though the football season was starting. And they had some pretty persuasive logic.

"They were like, 'Look, magic’s your life. And let's be honest: it's not like you're the quarterback. You know what I mean? Like, you're a long snapper.' "

Still, Jon wasn’t going to shirk on his Eagles duties.

On Sept. 11, 2016, Jon started at long snapper in the Eagles’ season opening win over the Browns. Then, a few days later, he was in L.A. to compete in the finale of "America’s Got Talent." He finished in third place.

Looking back now, Jon calls it the coolest time of his life.

"I never wanted to say no to anything," he says. "And so even if it was like, 'Hey, Jon, do you think you can be in L.A. and just do this hour interview?' 'Yeah, I’ll be there.' And I think it comes back to that sense of, I just — I wanted people to hear my name. I wanted people to say my name. And I wanted to people to associate good things with it."

Jon Dorenbos last played in the NFL in 2016. In 2017 he married his wife Annalise. Their daughter was born this year. Jon now regularly performs on "The Ellen DeGeneres Show."

And, one last thing: a few years ago, Jon stopped biting his fingernails.

For much more on the life of Jon Dorenbos — including his recent conversation with his dad — check out his new book with Larry Platt, “Life Is Magic: My Inspiring Journey from Tragedy to Self-Discovery.”