My friends, the decade is drawing to a close, and with it, as always, comes that predictable avalanche of best of lists: best of music, best of movies — you know, the tallies of all the highlights and ephemera of the past 10 years.

In sports, there's plenty to remember. It was a decade, of course, that witnessed LeBron James taking his talents from Cleveland to Miami and then going back to Cleveland and then finally finishing up out in Los Angeles.

This was also the decade of Serena Williams, of Simone Biles, of Usain Bolt, Johnny Football, James Harden and Elena Della Donne. We saw the rise and, more recently, the total collapse, of the great Golden State Warriors. And we saw two World Cup victories for the U.S. women's national soccer team.

And, you know what? If nothing else, this was a decade in which we saw the Chicago Cubs win the World Series — a supernatural event, which I am still not sure actually happened.

These are great memories, great athletes — all of them. But, as we close the ledger on the 2010s, I want to remember another athlete who may not be on most people's lists, but very much deserves to be there.

I'm talking, of course, about the Monday Night Football Cat. 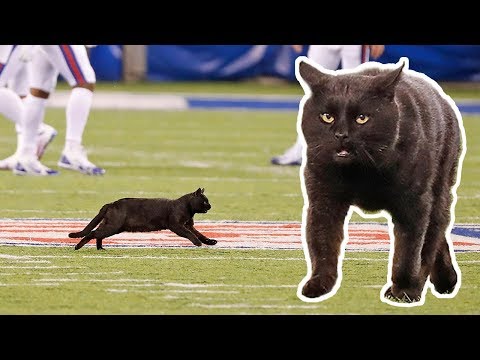 Oh, yeah. We cannot forget the Monday Night Football Cat. That's the cat which made a spectacular appearance in November of this year at a Giants-Cowboys football game in New Jersey.

It was this tense divisional contest, national TV — the whole thing — and Monday Night Football Cat strides confidently out onto the field, just, you know, stopping out there with this delightfully preening cat swagger before charging more than 50 yards downfield into the end zone.

Now, the cat managed to escape stadium security and remains in hiding. It's said to be a stray, feral to the Meadowlands, and is fed by kind strangers.

So far, the Monday Night Football Cat has done no interviews, not even with Cat Fancy. There hasn't been a Nike commercial, or even one for Friskies.

Now, you might think that this was nothing more than a cat running on a field. But that's wrong.

I think in that moment, the Monday Night Football Cat reminded us of why we love to watch sports. And that's for those unscripted moments of spontaneous joy, like the night at decade's close, when an unknowing stray cat unexpectedly and truly was the most entertaining athlete on earth.

Jason Gay Contributor
Jason Gay is a contributor to Only A Game.