A teacher standing lecturing before a group of students is a form of human interaction that stretches back at least a millennium and a half.

The roles are clear: the teacher with the knowledge tells the students who lack it everything they need to know.

But just because it's been that way for a long time doesn't mean it's the best way to teach.

WBUR's Sacha Pfeiffer speaks with a Harvard physics professor who says we've been teaching all wrong for the past 1,500 years. He says he's devised a more effective way -- and it's catching on. In fact, last month he won $500,000 for his development of "peer instruction."

Eric Mazur, professor of physics at Harvard University. He won the 2014 Minerva Prize for Advancements in Higher Education. He tweets at @eric_mazur.

On the standard lecture:
Eric Mazur: "There is no interaction. It's basically simply the lecturer, which is Latin for the reader, delivering information that is, in the 21st century, available in many different ways. And you only have to look at children to see that we're programmed to learn in a very different way. I mean, you don't give a lecture to little children about how to tie their shoelaces or how to put their fork in their mouth. They learn by doing. And I urge anybody who's listening to this program to think about something they're really, really good at and asking themselves, where did I learn that? Did I learn that by sitting in a lecture listening to somebody tell me about it? Or did I learn it by doing it? And I think we humans — we're really wired to learn by doing."

On the moment he realized lectures didn't work for his students:
EM: "I can pinpoint the very instant that it happened. It was after seven years of teaching at Harvard and believing that I was the world's best physics teacher, only to discover one day that the students had, indeed, not grasped the most simple, basic concept in my course. I basically asked a very simple question about it and then one student raised her hand and she said, 'Professor Mazur, how should I answer this question? According to what you taught us, or according to the way I usually think about these things?' I had no idea what she was talking about. And then it dawned on me that she had really not internalized the most basic principle I had been trying to teach. And it was not just her, it was the entire class."

On the newness of this experiential learning concept:
EM: "It basically goes back all the way to Socrates, who said we should teach by questioning, not by telling. I think in elementary school, in kindergarten, of course it's done interactively with kids teaching each other. Somewhere in middle school, high school, the transition occurs to lecture. So basically what I do is I teach by questioning, I ask a question, I ask students to commit to an answer to the question on their own without talking to anyone, and after they've committed themselves, they have to find somebody who has a different answer and try to convince that person that they're right and the other person is wrong."

On students who push back against peer learning:
EM: "Early on in my career, people were saying, 'Oh, Professor Mazur is lecturing straight from his lecture notes.' I never get that anymore. But now, I get, 'Professor Mazur is not teaching us anything. We have to learn it all ourselves.' And by the time you get your students and I get mine, they've already been pre-conditioned by years of passive lecturing. And that's what they consider to be teaching, and therefore learning. So, it's not easy to change the teaching but, in terms of the responsibility, ultimately, all the teacher can do is be a coach — induce the students to learn. The responsibility for learning ultimately is squarely on the learner and just lecturing may sort of hide all of the dirt under the rug, but it's not really engendering any meaningful and deep learning."

On whether this teaching method has returned him to an earlier stage of the learning process:
EM: "Absolutely. It's what my colleague, Steven Pinker, calls the curse of knowledge. Once you know something, it all of a sudden becomes simple. The difficulties go away. And by actually being forced to listen to your students, you rediscover the difficulties that have gone away. And on many occasions, students will ask follow-up questions which they normally would never do, which makes me think. In fact, I dedicate my book to my students who taught me how to teach and how to learn, basically." 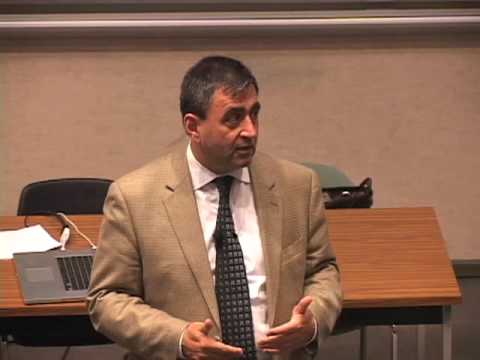