Moe Pope, the two-time Boston hip-hop artist of the year, is willing to fight for his music — from the school bully of his childhood, to the local music scene that’s been slow to embrace him.

Pope is a voracious musical omnivore, mainly because of his family. His aunt introduced him to Bob Marley, his grandmother loved Johnny Cash, his uncles couldn't get enough of The Clash, and his mother was devoted to Marvin Gaye.

He joined us back in March and discussed his childhood in the Academy Homes housing project in Roxbury, and the rising profile in the Boston music scene.

Moe Pope, independent hip-hop artist and two-time Hip-Hop Artist of the Year at the Boston Music Awards. He tweets at @moepope77.

On growing up in "one of the worst projects in the city":

"It's one of those things that, I don't think I knew how bad it was, you know? Lots of violence, lots of things that, possibly, you shouldn't... I remember mostly the hallway leading up to my apartment, they would urinate in it. So it was like, the smell was very pungent. I remember that probably most than anything...If you grew up in the type of surroundings that were going on around that time, I don't know if you can not have it affect your music. I don't think the inner city can not affect you."

"I'm a people watcher, you know? And I think I was like that when I was a kid a lot. I didn't speak a lot, I didn't do much. I listened to music and that's pretty much it, you know? I watched. And sometimes the things that you see aren't necessarily the most positive... My mom was really pushy, man, she used to make me try to talk. But, it's funny. I think that I have a love for words. Like, I love words, you know? And when I was a kid I did not speak unless I felt the need. And I made sure that my words were very calculated."

"When I say I'm a rapper, there's kind of an instant, either, look that they give you or, it's just kind of seen as less-than. That's how I feel most of the time. There's not many venues for me to play or to do my craft, even with all the accolades that we've gotten, I can barely get the right shows here. They won't book me. Here, being Boston. Because I'm a hip-hop artist. And that comes with 'violence,' or it comes with something else. What's inside of their mind, that's what they think. You go to any club in this city and they play hip-hop. But yet, hip-hop musicians are not allowed to play inside of their club, you know? So, what does that mean, exactly? I don't know."

On the sound he's been trying to achieve all along:

"A little bit of rock, a little bit of punk feel, but hip-hop. This is not rap-rock. This is not Limp Bizkit, 2014. You know, this is very much hip-hop and very much today's music. It sits in a pocket where it's not so aggressive and so loud that you can't cook dinner with it and sip a glass of wine, but you can still, you know, shake a booty to it." 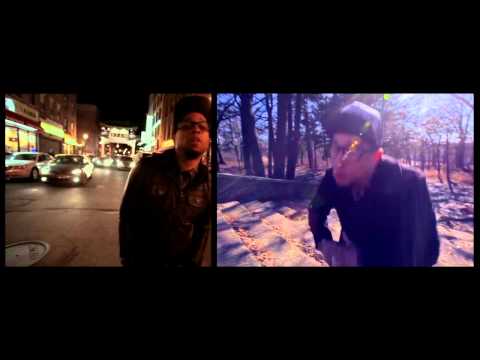