More than two months ago, Nikolas Cruz allegedly entered Marjory Stoneman Douglas High School in Parkland, Florida, and opened fire. In all, he shot and killed 17 people, leaving another 17 wounded.

Among the dead was 17-year-old Joaquin Oliver. His parents, Manuel and Patricia Oliver, founded the organization Change the Ref to advocate for gun control. And as part of that mission, they are traveling across the country to install artworks called "Walls of Demand."

Manuel, who is an artist, is installing one of the walls in Springfield on Friday, April 20, near the headquarters of Smith & Wesson, which is the company that manufactures the weapon used in the Parkland shooting, an assault-style M&P15.

What we should know about Joaquin

Manuel: "He was a wonderful person. He was always making sure that everybody will be OK. He was in love with fairness. Everything needed to be positive, not only for him, for his family, but also for his friends and new people that he met — he was always taking care of people. He was a very protective person."

On Joaquin's plans after high school

Manuel: "He had a few thoughts. Very creative human being. We do remember one conversation asking him, 'So, what are you going to do, what are your plans in life?' And he answered more than once, 'I don't know yet, but it's going to be really big. I'm going to be doing some great things.' That was an actual conversation. That was the level of conversations that we had with our son."

How the project got started

Manuel: "The mural is a project under the organization that we started. The organization's name is Change the Ref. And part of that project ... includes art through the 'Walls Of Demand.' So the 'Walls Of Demand' started by coincidence. We were invited by [Miami Heat's Dwayne] Wade to be part of a gallery where he was going to honor the victims of Parkland. And it happened that in that gallery there was an empty wall. And I had the option of doing some painting and writing some words, demanding a change. It became impactful. A lot of people were involved with the idea of bringing art. There was also an immediate connection between we, as parents of a victim, and the leaders of the youth movement. So that made perfect sense for us because at that point we understood that Joaquin is one of them as long as we give him a voice and a presence."

On how the art installations are created

Manuel: "The way I see this is not me being an artist, it's Joaquin being an activist."

"There's images of Joaquin that we have used in several of the walls — in all of them. Then we write with a roller and paint, 'We Demand,' and that demand can change from one place to another. So we demanded a change. We demanded a life. We demanded different things in different cities. The murals stay there. The final destination of the mural, we don't worry about that. For us, the goal is to be able to create 17 murals in 17 different cities."

Here's a video of Manuel's installation in New York: 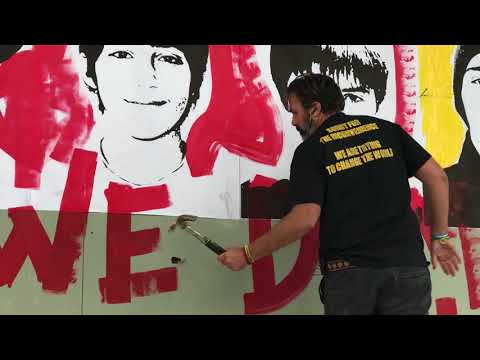 Manuel: "It's totally being with my son — supporting him. It's a therapy, also. This is who I was before. I mean, I didn't start painting... I painted before everything happened so I'm not changing my ways at all. This is who I am. This is what I know. This is my comfort zone, in an uncomfortable way, but it is what I know how to do. So it's very hard actually to go through the process of starting and finishing the painting. But there is also a lot of support from students and people that love what is happening. There's a big connection that brings you that strength that you need to go ahead and finish it."

On the name Change the Ref

Manuel: "It's a name that actually what Joaquin created when we were in a basketball game. I used to coach his team and one day the ref made terrible calls and he was expelled from the game. He asked me to do something. So when I went to fix things, I was also expelled from the game. So we were both driving back home and he said, 'Dad, you know what? I don't think there's anyway that we can have a fair game with this ref. I actually think there a connection between him and the other team.' So then it happened and those words were a perfect definition of what is going on in Congress today. If one of the teams is somehow connected to the ref, or giving money to the ref, the ref is not able to make a decision on their fairness — or what we call a 'fair game.' So the main mission of Change the Ref is to clean any connection with any super lobby — NRA — directly or indirectly with any of the congresspeople that is representing us."

On the organization's message

Manuel: "Well, No. 1, the location itself. Being able to bring Joaquin's voice to the same location that manufactured that weapon that was the one that was used at the shooting. That is a strong thing to do. Now, here's the thing. We need to impact people in these actions. We believe that impacting people is way more powerful than convincing people. Convincing people will take a lot of time. So we need the courage to show how the drama we're living and how that could be drama in any family. Randomly. This could happen to anybody. Even to anybody that works at Smith & Wesson."

On what's different after this shooting

Manuel: "The new voters. I believe that this time, the victims are defending themselves. Not only that, [but] the victims are used to receiving fast answers because [they've been on] technology their whole lives, so they don't have much patience. I really think there's a difference between this time and others because of their impatience and power of these young leaders."

Patricia: "They are very powerful kids. And also you get impressed that they are so articulated and they are so determined to take action. So that's what makes a huge difference from the other events. This time I don't know why, they woke up, and they said, 'Yeah OK, no more.' "