Today on Season Ticket, host Chris Gasper (@cgasper) sits down with Red Sox All-Star center fielder, Jackie Bradley Jr., for an exclusive interview. Bradley Jr. talks about hearing his name in trade rumors, what he's been working on improving this offseason, and his reaction to the rival Yankees' big offseason. He also details how he became one of the league's best fielders, playing Fenway Park's tricky outfield angles, and the hardest catch he's ever made.

Chris Gasper: For the team, the offseason came probably a little sooner than you guys would have liked, losing to the Houston Astros in the first round of the playoffs in four games. Does it soften the blow at all, though, when you see that that team went on to win the World Series?

Jackie Bradley Jr.: At the moment it doesn't. But, you know, if a team was going to win it, you like to know that you were knocked out by the team who actually won it. I don't think it's softens the blow, though. Losing is losing, whether you lose by 20 or one it's a loss. It's not going to count any different. But I'm happy for them and we look forward to another year.

On his first impression of new Sox manager, Alex Cora

Chris Gasper: Some changes in the offseason — John Farrell is no longer the manager, Alex Cora the new manager of the Red Sox. Have you had an opportunity to speak with Alex and what's your impression of him? He's a guy that not that long ago was sitting where you are as a major league player.

Jackie Bradley Jr.: Yeah, I actually have had lunch down there in Florida with him. We talked, enjoyed ourselves and, like you said, [he's a] very young manager. He played with some of my teammates! So, he's not too far removed from the game and it's going to be nice to have that mixture of old school and new school. He knows what winning is like since he just came from a championship team, so we look forward to seeing what he can do for us.

"During batting practice, I would just treat every single ball as if it were a live situation. And I just got better and better."

Jackie Bradley Jr., on how he became such a good fielder

Chris Gasper: Do you have a vibe a feel for what type of manager he will be?

Jackie Bradley Jr.: I don't exactly. But from talking to him, he seems like he's a very good communicator. I think you would like someone who can just sit and talk with you and tell you how it really is or be there for you. And I think that's huge in his game, especially for young players, and sometimes for the veteran guys as well. They like to know that somebody has their back. So, it's going to be good to see him operate.

On hearing his name in trade rumors

Chris Gasper: Your name has been mentioned in trade rumors. Have you spoken to Red Sox general manager, Dave Dombrowski, at all about those trade rumors and gotten any sort of assurances from him that you're not on the block?

Jackie Bradley Jr.: I have personally not spoken with Dave Dombrowski.

Chris Gasper: What is it like when you hear your name intrade rumors? Does any of that stuff filter into your world?

Jackie Bradley Jr.: No, not for me. I have the perspective that it's something out of my control. Maybe if it were something I could control I would have an emotional attachment to it. But, you have to realize it's a business and they want to do what's best for the team. And I want to help the team. So, at the end of the day, if it happens it happens, if it doesn't it doesn't. The "what ifs" and stuff like that, you can't let that control your offseason. And I truly don't let it control mine.

On improving in the offseason

Chris Gasper: What have you been working on this offseason to add to your game?

Jackie Bradley Jr.: I think it's really simple: it all boils down to consistency. Consistency and forming, creating and keeping good habits, throughout the season. Those keys right there are what's going to make you a successful player.

On consistency and injuries

Chris Gasper: You've had some great first halves — like in 2016 your first half was outstanding, you made the All-Star team. And last year you first half was good. And then the second half wasn't as good. .204 was what the average was, .579 OPS. You mentioned consistency. Can you put your finger on what the difference has been for you in the first half versus second half?

Jackie Bradley Jr.: I don't know. I don't know. Obviously, everybody feels good coming out in the first half. There are some people who start out a little slower. To be honest with you, last year was my first year dealing with injuries. I actually [wasn't] injured for too long but, for me, it felt like an eternity because I had never missed games because of injury. So, working through those and trying to stay healthy and keeping my body in a good position to be able to perform every single night, that's always number one because that gives you the best opportunity to help your team win.

Chris Gasper: You had a knee injury and a left thumb injury, which, I can imagine, for a left-handed batter is really difficult. That was in August — how are those injuries now?

Jackie Bradley Jr.: I'm great. I feel great. No lasting effect on either one of [those injuries].

"Sure does look good on paper! But I've never seen paper win ballgames."

On how he became a great fielder

Chris Gasper: We can't have you on and not talk about your defense. You're one of the best if not the best in the game. What's your approach defensively? Have you always been this good on defense or is there something that happened to make you this good?

Jackie Bradley Jr.: I think it's a combination. I just have fun with it. That's what it all boils down to. Everybody talks about how easy [I make it look] and this and that. Ever since I was a kid I would try to make it look as easy as possible. I would try to make all of these Top Ten plays. It was to the point where I had some coaches [say], "Well, you're never going to be on Top Ten plays. You're just not going to." I would look at them in a puzzled look and they were like, "You don't understand what I'm saying. You make it look too easy. So that's why you're not going to be on there." So, I took it as a compliment. But, it's something that I've always worked at ... During batting practice, I would just treat every single ball as if it were a live situation. And I just got better and better.

On one of the hardest catches he's ever made

Jackie Bradley Jr.: I would say one of the most difficult catches that I made was probably in 2014. Rubby De La Rosa was on the mound. We were playing the Chicago White Sox and Tyler Flowers hit a ball into the right center field gap. 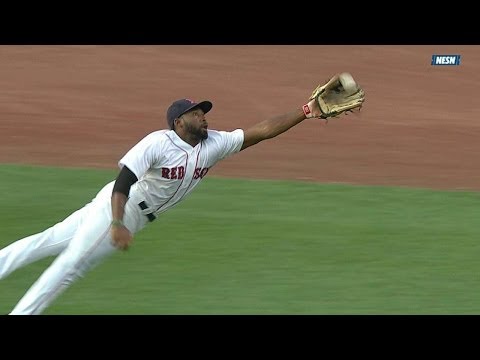 Full extension. I'm talking about as far as I could possibly go. The glove was probably halfway off my hand and the ball probably hit the tip of my glove, snow cone. I remember [Alejandro] De Aza was on second base and as I get up from the ground and I throw it in, he tagged up! So, it's like he knew I would catch it!

Jackie Bradley Jr.: That's all I could really think about at that particular time ... I wasn't even excited I made the catch. I was frustrated that he was still able to tag.

Jackie Bradley Jr.: Obviously, Aaron Judge is a strong human being so you're not going to be playing him at normal depth like any other ballplayer. Off the bat, I obviously knew it sounded good and it had to height and the distance ... I knew I had to get back there so I didn't look at the ball initially. I always try to focus on an area — that's how I'm able to pick up speed in the first couple steps. As I start approaching the fence, I turn back to try to find it again. And Fenway's angled right where I was headed — not only is it angled at the base of the fence, but it's also angled where the bullpen and the 420 [marker meet] ... So, I just happened to find that happy medium to not only get up but also to reach back at the same time. 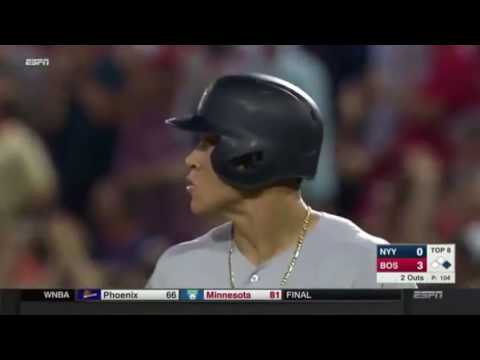 [cont.] So, it was unbelievable. I just the timing of it being Sunday Night Baseball and Aaron Judge, I think that's what made it a pretty hyped play.

Chris Gasper: And you seemed pretty hyped afterwards ... I think you pounded your chest.

Jackie Bradley Jr.: That was a big play. I think it was the eighth inning. David Price was on the mound. And, you know, that was a momentum changer. We were able to win the game and I think we won by one or two runs. So, you know, it was it was a big play.

On people saying the team needs to add a power bat

Chris Gasper: You guys have won a lot of ballgames the last two years, back-to-back 93-win seasons. This offseason, though, the focus seems to be on the fact that the team needs to add more power. You guys were last in the American League in home runs last year, 27th in Major League Baseball. Do you feel like you guys need to add some big bat to this lineup or do you feel like that increase in power can come internally from the guys that are already on the team?

Jackie Bradley Jr.: The first thing I want to mention — you did say back to back AL East champions with the team that we have right now?

Jackie Bradley Jr.: Oh, okay. I was just wondering if I heard that correctly. But, I mean, I don't know what we need to do. It's out of my pay grade. I'm sure there's a lot of smart people who do and they're going to make decisions accordingly. We have a very very good team as it is. Can we get better? Absolutely. And I think that's what they're trying to do: make the team better.

On the Yankees splashy offseason

Chris Gasper: Fans look at it and say that the Yankees got Giancarlo Stanton, so the Red Sox have to respond with a tit-for-tat thing. As a player, when you hear the Yankees just got Stanton, what goes through your mind?

Jackie Bradley Jr.: Sure does look good on paper! But I've never seen paper win ballgames. I'm not saying that it wasn't a major acquisition because it was. You just took the home run champ and put them on a squad that already had a lot of homers. Everybody can do math in that sense. So, you know, it was a pretty big move, obviously. But you still got to go out there and play the game.