For the past two months, the enormous mural of a colorful, crouched figure (pictured above) in Dewey Square on the Rose Kennedy Greenway has been the subject of intense media and public attention.

Measuring 70 by 70 feet, the mural that the public has dubbed “The Giant of Boston” is the work of Os Gemeos, twin brothers and artistic collaborators Gustavo and Otavio Pandolfo from Sao Paulo, Brazil. (Full disclosure: The mural was commissioned by the Institute of Contemporary Art as part of our Os Gemeos exhibition.)

In the two weeks it took Os Gemeos to create the work, thousands of people gathered to watch the larger-than-life figure emerge from spray-painted outlines and large areas of color. When the piece was complete, an iconic and recurrent feature of Os Gemeos’ artwork was revealed: a character with enormous eyes; bright yellow skin; vividly patterned, mismatched clothing; and a bright red cloth covering the head and lower portion of the figure’s face.

Public response to the ICA through on-site conversations, social media and telephone calls was overwhelmingly positive. Local and national press commented on Os Gemeos' exuberant contribution to the Boston skyline — from Sebastian Smee, Pulitzer Prize-winning art critic for The Boston Globe, who noted the mural was “by far the most successful piece of public art I’ve seen in Boston in the more than four years I’ve lived here,” to The Wall Street Journal, which called the artists “rock stars who have appeared everywhere from Miami to Scotland.”

Public commentary reported in a Boston Business Journal article ranged from “the color brightens things up, but it’s more avant garde than I would have chosen,” to "I like it because it's vibrant and it's colorful and the downtown needs a lot of that."

Things took a dramatic turn when local TV news station FOX-25 picked up the story. Their segment began with the anchor stating that the Os Gemeos mural was at “the center of a controversy … Some are comparing this image to the image of a terrorist.” The segment ended with the reporter noting that she was sure “we had not heard the end of the story yet.”

"What does this look like to you?" &mdash; I believe it is an issue of the media declaring a controversy, rather than reporting on one.

FOX-25 assured that, by highlighting the segment on their website and Facebook page, asking Facebook fans, “What does this look like to you?” In short order, there were nearly 500 posts, the majority containing overtly racist comments, including “it looks like towel heads” and “go to Iran to do your art not USA.” Before long, the American Civil Liberties Union weighed in, noting that the comments on FOX-25’s Facebook page were “troubling… particularly after the shooting at a Sikh temple in Milwaukee, in which someone may have passed judgment on others based simply on who they are or how they dress.” Almost immediately after that, the station scrubbed its Facebook page of the more offensive comments.

There will always be divergent opinions about art in the public domain. Good art often invites more questions than it answers. But the critical issue raised by Os Gemeos’ mural is not an aesthetic one; rather I believe it is an issue of the media declaring a controversy, rather than reporting on one. Social media and digital technologies have forced most traditional media outlets to rethink their strategies to sell papers and attract advertisers, listeners, readers and viewers, but when does a marketing campaign for audience morph into a platform for prejudice? The seemingly fabricated dustup created by FOX-25 effectively did that and more, when other news agencies around the world picked up the “controversy,” creating a snowballing effect. In response, the artists reaffirmed their intent: “to bring color, peace, dream, questions, stimulation of the spectators' imagination, and especially respect to the community.”

As has often been the case, contemporary art is a lightning rod for issues that divide and disturb us. FOX-25 had the opportunity to offer insight and context to the work of Os Gemeos. Great journalism and great art can increase understanding and tolerance of others through words and images, they can challenge beliefs and opinions with new perspectives, and at their best, they can elevate the value of telling the truth. “The Giant of Boston” did much more than expose an ambiguous crouching figure. It revealed the importance of ethical journalism and the consequences when those standards are compromised. 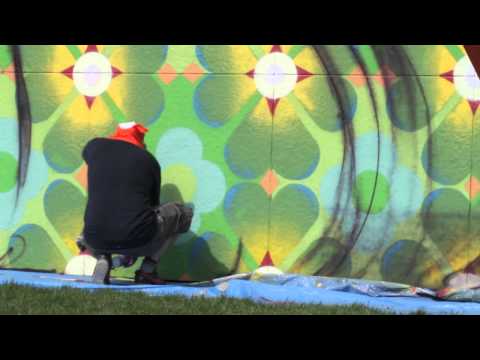 This program aired on September 25, 2012. The audio for this program is not available.