Back when Hillary Clinton was running for president against Barack Obama in 2008, she had a rather famous interaction with a woman on the campaign trail. This was on the eve of the New Hampshire primary, in a coffee shop in Portsmouth, where the dozen or so undecided voters on hand were outnumbered by some 100 members of the media.

One of the actual voters asked Clinton a simple question: “How do you get out the door every day? I mean, as a woman, I know how hard it is to get out of the house and get ready. Who does your hair?”

Clinton made a few jokes about how she gets help with her coiffure. Then the comic deflections gave way to something more authentic. “I just don’t want to see us fall backward as a nation,” she said. “I mean, this is very personal for me. Not just political. I see what’s happening. We have to reverse it.” 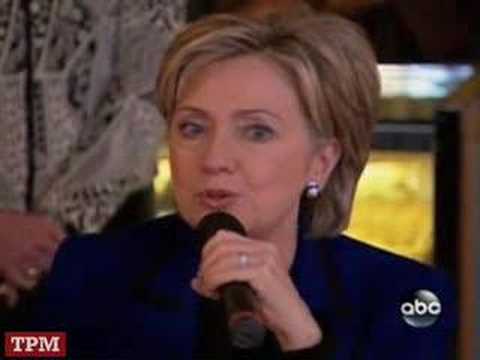 She was talking about stanching the ineptitude and moral profligacy of the George W. Bush era, and it was clear from the strain in her voice, and the welling of her eyes, how much this meant to her.

It was one of those rare and lovely moments in political life where the polished persona gives way to unscripted emotion.

But because this was Hillary Clinton, “The Moment” — as it was immediately branded — became a controversy.

Yes, the idea that candidate Clinton was emotionally involved in the mission that had dominated her life (i.e. public service) came as a genuine revelation.

And why? Because the press had spent, oh, 25 years constructing a phony persona for her, as some kind of bloodless Lady Macbeth: steely, guarded, robotic.

The good old patriarchal mindset that casts any woman with ambitions beyond standing by her man, with the seditious desire to hold power in our culture — maybe even power over (gasp) men — as emotionally neutered.

The Clinton revealed in "What Happened" is not an entertainer or a visionary or a provocateur. She doesn’t make for good television. She just wanted to govern.

And thus you had a cavalcade of stories sanctifying the moment, along with pundits such Maureen Dowd, who derided Clinton for her attempt to “cry her way back to the White House.”

I mention all this by way of observing that the reaction to Clinton’s new book was essentially preordained.

Those indoctrinated by the “vast right-wing conspiracy” she identified three decades ago vilified Clinton, often without bothering to read the book. Those sympathetic to her cause celebrated her grit and candor. Like all women in the public eye, she was judged and prejudged, relentlessly and ruthlessly.

I spent the weekend reading "What Happened." The Clinton who emerges from these pages is neither heroic nor villainous. She’s an earnest Midwesterner who clings, often poignantly, to an outdated style of political engagement.

She believes that politics should be a contest of ideas about how to help people in need, not a tribal war of words. She believes policy should trump personality, and that most Americans want leaders who offer pragmatic solutions rather than retailing grievances.

She was right, by about three million votes.

There are certainly moments in which Clinton appears blind to her own privilege — name-checking Oscar De La Renta or Anna Wintour, for instance.

And there are other moments when Clinton’s overriding sense of caution — the byproduct of incessant attacks from the media — made me want to scream. Most notable is the moment during the second presidential debate when her opponent, having bragged to the world of his sexual predation, stalks her around the stage. Clinton tells us that her “skin crawled,” but rather than turning around and telling him to back off, the candidate stoically keeps to her mark.

The Clinton revealed in "What Happened" is not an entertainer or a visionary or a provocateur. She doesn’t make for good television. She just wanted to govern.

The book, in this sense, isn’t really a testament to her naiveté so much as our own monstrous cynicism, a fatal national flaw whose loyal handmaidens are (and forever have been) racism and misogyny.

Americans were given a stark choice in 2016. The male candidate was a proud bigot and avowed sexual predator who ran to hear the roar of the crowd. The female candidate was remarkably qualified public servant who … just wanted to govern.

That, by the warped rules of our current electoral system, is why she lost. That’s what happened.