If ever there were an Olympic organization that merited the death sentence and a reboot, it’s USA Gymnastics, whose sport was one of the crown jewels of the Summer Games until recent disclosures soiled it beyond repair.

The latest stain: an up to 175-year sentence handed down this week to former USGA team doctor Larry Nassar for sexually abusing at least 156 young gymnasts over the last 20 years. It won’t stop there. Nassar’s conviction is an early chapter in an unraveling of dirty secrets in a sport that, in its quest for gold medals and sponsorship dollars, went off the rails.

Nassar is a monster. He used his position as team doctor, both with Michigan State University and the U.S. Olympic team, to take advantage of naïve and trusting young athletes, digitally penetrating the girls under the guise of physical therapy. “The crotch doc,” Michigan State volleyball players called him. The coaches he worked under, other trainers, gymnastics officials, Michigan State officials — none of them stopped Nassar despite occasional complaints.

No accolade or award is worth enduring abuse. There is a healthy and supportive way to make champions.

It took one brave gymnast, Rachael Denhollander, who filed a police report against Nassar in 2016, and an investigation by the Indianapolis Star, which Denhollander contacted, to stop Nassar’s serial abuse.  According to testimony during his sentencing, it sometimes happened with unsuspecting teammates, even parents, in the same room. It sometimes happened in the presence of other coaches and trainers.  And it often happened to future Olympians at the Karolyi Ranch, north of Houston, the official training center of USA Gymnastics.

Turns out the Karolyi Ranch, run with complete autonomy by Bela and Marta Karolyi, with Nassar functioning as the training camp’s doctor, was something of gym of horrors. According to the powerful and moving court testimony of Mattie Larson, the 2010 U.S. National champion in the floor exercise, Nassar first started abusing her at the age of 14. 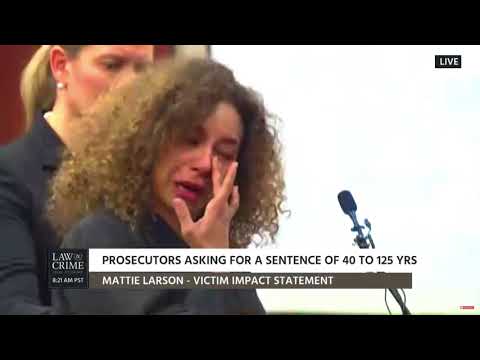 Every summer Larson dreaded going to “the Ranch”, which she called “the perfect environment for abusers and molesters to thrive” — outside of cellphone range, remote, and supervised by verbally abusive, hyper-intense adults who encouraged (with Nassar’s blessing) the youngsters to train and compete while injured, obsessed about the athletes’ weight, and trained them relentlessly for six hours or more without food or water breaks. Larson developed an eating disorder, took laxatives every day, and suffered panic attacks before every training camp. It was such a horrid experience that one year she tried to give herself a concussion so she wouldn’t have to go, banging her head against the bathtub. “I was willing to physically hurt myself to get out of the abuse I received at that ranch.”

She wasn’t just referring to Nassar’s sexual abuse, which she endured for five years.  When she made a couple of mistakes during the 2010 World Championships, costing the team a Gold medal, Marta Karolyi and her coaching staff “shunned” her. “I have never felt so small and disposable in all my life,” Larson testified. “It truly bothers me that one of the adults who treated me this way, making me feel completely invisible, is the new national team coordinator, Valeri Liukin.”

Liukin took over the women’s program from Marta Karolyi in September, 2016, after the Rio Olympics and a month prior to a lawsuit filed by an unnamed Olympic gymnast accusing the Karolyis, USA Gymnastics, former USAG presidents Bob Colarossi and Steve Penny, and others of ignoring Nassar’s sexual abuse and failing to protect the plaintiff, who, it was later revealed, was 2012 Gold medalist, McKayla Maroney. Maroney had first been abused by Nassar at the age of 13.  That lawsuit was settled out of court for $1.25 million, though USA Gymnastics forced Maroney to sign a confidentiality agreement rather than to acknowledge the cancer in the organization’s heart. That cancer, at last, is on full display.

The U.S. Olympic Committee has taken the unprecedented step of asking the entire 21-member board of USA Gymnastics to resign, or face decertification. So far Chairman Paul Parilla, Vice-Chairman Jay Binder, and Treasurer Bitsy Kelley have done so.

Other casualties of the unfolding scandal: Michigan State University President Lou Anna Simon, who, according to an investigation by The Detroit News, was one of at least 14 Michigan State University employees to have received reports of Nassar’s sexual misconduct going back to 1998 and who did nothing about it. Succumbing to mounting pressure, Simon — who is also facing at least one civil lawsuit — resigned after Nassar’s sentencing, stopping well short of acknowledging any personal responsibility. USA Gymnastics also cut ties, on Jan. 22, with another of its longtime trainers, Debbie Van Horn, after Mattie Larson testified Van Horn was sometimes in the room while Nassar was sexually abusing her, and said nothing. Enablers. There were lots of them for lots of years.

USA Gymnastics has cut ties with the Karolyis and “the Ranch.” But the fallout from this scandal will go on for years. The USOC has said it will conduct an independent investigation into the USGA to find out how the abuse could have continued for so long, and to discover who knew what, when.  Michigan State, too, has said it will submit to an independent inquiry by the state’s attorney general office and has set aside $10 million to reimburse victims for their therapy. Both organizations will be fighting or settling what promises to be multiple lawsuits from abused gymnasts for years. (At least 140 of them have already been filed.) USGA’s sponsors are fleeing in droves. Under Armour, AT&T, Kellogg’s, Proctor & Gamble, and Hershey have all cut ties with USA Gymnastics, and others will doubtless follow. Only then, after a complete and utter purge, can the culture change.

As Mattie Larson said in closing her testimony: “No accolade or award is worth enduring abuse. There is a healthy and supportive way to make champions.”

USA Gymnastics must now try to find it.

E. M. Swift Cognoscenti contributor
E.M. Swift wrote for Sports Illustrated between 1978 and 2010, covering a wide range of sports but specializing in the Olympics. He is now a freelance writer living in Carlisle, Mass.