My son, Wes, was 2 years old when he decided to wear a watch. He asked for help sliding an Elsa (from “Frozen”) watch — once loved and then discarded by his big sister — over his tiny wrist, pushing it up his arm until it fit snugly around his elbow. Then, he hardly looked at it. Instead, he started yelling.

There was no response, of course — from Siri, or Elsa, or anyone. He started swinging his arm around angrily, yelling “Siri!” at the top of his lungs until I finally implored him, “Wes, stop screaming at that watch!”

Why was he shouting at this obviously not-smart watch? And even if he thought it’d respond, why did he get so angry?

Well, like most of the bad habits children pick up, he’d learned it from his parents, or, more specifically: he learned it from me. He has seen me speak commands into my Apple watch countless times and usually, Siri responds on cue.

And yes, admittedly, if Siri doesn’t respond immediately — or with the intended result — I get frustrated. I may even raise my voice at her from time to time.

Did you catch that? I wrote her. Not him. Not it. To me, Siri is female. I could choose a male voice, but that’s not Siri to me, not really.

Smart home products like the Amazon Echo and Google Home were top sellers last holiday season and, like Siri, the disembodied voices that live inside those devices are also female. Or, rather, their voices sound like female voices, so we think of them as female.

They are the personal assistants that live inside our phones, watches and smart home devices. They are also more fully developed robots. “Tonight Show” host Jimmy Fallon engaged in an awkward conversation on his show with Hanson Robotics’ Sophia. Or maybe you’ve heard of Osaka University professor Hiroshi Ishiguro’s robot called Erica. And let’s not forget the stars of the British documentary, “The Sex Robots are Coming.” All of those robots are female, or, at least, female-like. 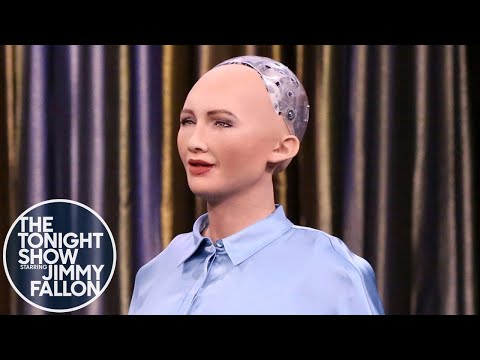 There are practical reasons to make robots sound or appear female: Studies show that men and women respond better to female voices. And, traditionally, administrative assistants — the roles that Siri, Alexa and the like, purportedly fill — have been women.

But maybe this offloading of administrative tasks to artificial intelligence is an opportunity to rethink, rather than rehash, the status quo.

It’s problematic that we often treat the all-female artificial intelligence administrative workforce inhumanely. Think of the way we get their attention: “Hey Siri!” or, more curtly, “Alexa!” Or, how we react when they don’t do as they’re told. I already admitted to raising my voice sometimes, and now my kids do too. We would never talk to their mother, my wife, that way. (And that’s to say nothing of the inappropriate questions Siri is asked: “What are you wearing?” is a popular one.)

As the tide of our culture turns in the wake of the #MeToo movement and women everywhere are emboldened to speak out against the abuse and harassment, sexual or otherwise, perhaps this is also the moment to speak up on behalf of virtual assistants.

I decided to try out the male voice that Apple offers for Siri. My kids had mixed reviews. Nelly, my daughter prefers the female voice, “because it’s so pretty.” Wes, on the other hand, said, “I want to do the daddy one.” My wife likes the male voice, but thinks he should have a different name. (She suggested “Frank.”)

Changing the voices of our virtual assistants is one option. But that’s only a band-aid solution. I ought to be more careful about how I interact with Siri: No more raising my voice or getting easily frustrated. I’ve even started saying “please” and “thank you.”

Fortunately, good habits catch on quickly in our family. We got a Google Home Mini for Christmas and the kids' favorite thing is to ask is, “Hey Google, tell me a joke … please.”

The jokes aren’t great, but we still say “thank you.”