Last week, I did a reading for my new book at a local bookstore. After finishing the program, we opened it up to the audience. The first question came from an older white gentleman who rose from his seat in the back and marched to the front of the room.

He had a piece of paper in his hand, which he brandished for the rest of the crowd. On it was a photocopy of a Facebook post in which I had praised Hillary Clinton as “the president of my heart."

The man, by now trembling with rage, began to cite a litany of what he considered to be Clinton’s sins (her support for the Iraq War, her role in the invasion of Libya, etc.) “How black is your heart?” he growled at me.

He turned and stomped back to his seat before I could answer, muttering, “And that’s why I voted for Trump!”

The rest of the audience was stunned by the man’s palpable contempt.

So was I. I tried to be deferential in answering his “question.” But what struck me as odd, in retrospect, was that this man was still obsessing over his hatred of Clinton, nearly two years after she lost the election. He had nothing positive to say about the man he’d voted for, only wrath for the woman who ran against him.

I thought about this guy as I watched a video clip of Attorney General Jeff Sessions speaking to a group of young conservatives on Tuesday. The high schoolers spontaneously start chanting “Lock her up” and Sessions — our nation’s top law enforcement official — repeats their words and chuckles fondly. 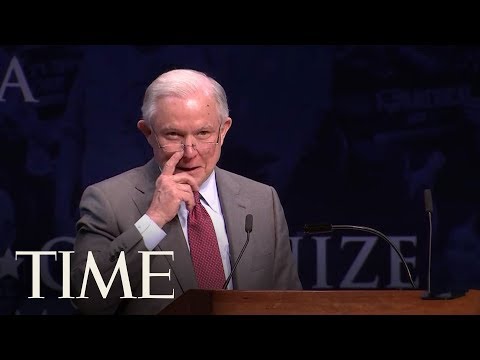 As you may remember, “Lock her up” was the central rallying cry at the Republican National Convention. Forget policy proposals aimed at helping working Americans, or hopeful slogans. Instead, the most salient message from one of our two major political parties was simply that the opposing candidate should be imprisoned.

At the time, I figured this chant was a way of unifying the party behind a divisive candidate, one who barely understood the precepts of traditional conservatism and who had few real policy positions.

I can hear now much more clearly, in this despotic chant, the desire to create a culture in which men have legal dominion over women and girls.

But as I listened Tuesday to the bellowing of those mostly male teenagers, something finally clicked in my mind: “Lock her up” isn’t really a political rallying cry. It’s an attempt to criminalize female ambition and autonomy.

As a cultural mantra, “Lock her up” has become entirely unmoored from any specific conspiracy about Clinton. At this point, it’s more like a Pavlovian response, generated by citizens whose political views and behaviors are driven not by any coherent ideology, but by a reflexive hostility toward all women.

In this sense, the pronoun “her” was never just about Clinton. She was merely a convenient scapegoat for any woman who refused to accept the patriarchal yoke, who dared to call her male opponent a credulous puppet, who decried his sexual predation, who refused to accept his laughable excuse that bragging about sexually assaulting women was “locker room talk.”

I can hear now much more clearly, in this despotic chant, the desire to create a culture in which men have legal dominion over women and girls.

Sometimes this desire is overt. Women and girl migrants who come to America fleeing danger? Lock them up. Women who want to exercise their reproductive rights? Lock them up. Woman who dare to speak about sexual harassment and abuse? Well, if we can’t lock them up, we can at least shut them up.

If you’re a woman in America, they're talking to you. They’re talking about locking you up.

The GOP has become a party practically immune to accountability when it comes to assault and harassment against women. Unless there is media-ready proof of abuse, such as photos of your wife with a black eye, you needn’t worry.

Just as often, the effort to punish women is more insidious, residing in policies that take aim at economically vulnerable women.

As the mid-term elections approach, you can be sure we’ll be seeing more Republican rallies, and hearing crowds roar “Lock her up.”

This speaks to the moral and intellectual poverty of the modern GOP, of course. But it also speaks to a vicious misogyny that extends far beyond an election. The “her” has become universal at this point.

If you’re a woman in America, they're talking to you. They’re talking about locking you up.