About a week ago, Ady Barkan, a Maine man suffering from ALS, started Be a Hero, a fundraising drive intended to pressure Sen. Susan Collins to vote against the confirmation of Brett Kavanaugh to the Supreme Court. Barkan fears that if Kavanaugh is confirmed, health insurance coverage for pre-existing conditions like his will be rolled back.

His campaign quickly gained traction; 46,000 people have pledged to donate over $1.2 million to Collins’ future opponent if (and only if) she votes to confirm Kavanaugh. If Collins votes against confirmation — which seems more probable now than it did just a few days ago, given next week's potential hearing with Kavanaugh's accuser — all pledges will be refunded. 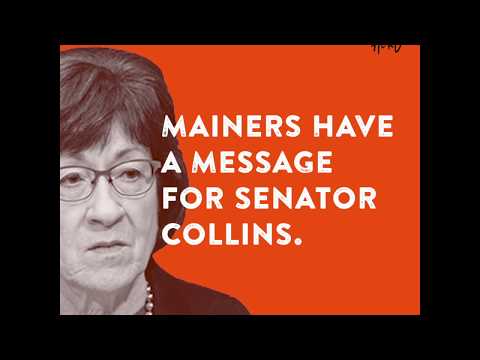 When Facebook and YouTube kicked notorious right-wing conspiracy theorist Alex Jones off of their platforms in August, Twitter did not. At least at first. To protest Jones’s continued presence, more than 71,000 users installed a block list that barred ads from many Fortune 500 companies and other advertisers from appearing in their feeds. Three weeks later, CEO Jack Dorsey had a change of heart and booted Jones, too. Money — or rather, the potential loss of it — spoke, and Twitter listened.

In both cases, constituents are using money to try to influence policy and votes.

Though the Be a Hero campaign isn’t offering to pay Collins to vote “no,” she has nonetheless decried this tactic as attempted bribery. The Wall Street Journal’s editorial board agreed with her, arguing that, “… federal law defines the crime of bribery as ‘corruptly’ offering ‘anything of value to a public official, including a Member of Congress, with the intent to ‘influence any official act.’”

There’s a lot to unpack in that sentence. Are boycotts or fundraising drives for or against political candidates inherently corrupt? Is donating to the campaign of a government official — or in this case, refraining from donating to a political opponent — an offer “of value”? Or is the left merely adopting the legal tactics — employed with ever-greater zeal and scale since the Citizens United decision — by the conservative right?

Journalist Charles Pierce argues the latter. In response to politicians like Sen. Orrin Hatch waving a warning finger against initiatives like the Be a Hero campaign, Pierce wrote:

“…this is not remotely close either to bribery or extortion. This is a demonstration of how post-Citizens United campaign-finance works, CU having essentially legalized influence peddling. Have any of these people noticed the way that the NRA or the Club For Growth or a hundred other organizations ‘rate’ members of Congress based on their votes? They even warn members of Congress in advance as to the votes on which the members of Congress will be rated.”

I’m neither a lawyer nor a scholar, and am unqualified to speak to the merits of the conservatives’ insistence that in Collins’ case, this kind of voting with one’s wallet is illegal. But I am a sentient human being living in this country, and thus qualified to share my observation that the unchecked power of money to elect politicians, choose judges, and get cronies appointed to office is as plain as the noses on the faces of Scott Pruitt, Betsy DeVos and Kavanaugh. When casino magnate Sheldon Adelson gets a windfall of almost $700 million from the 2018 tax cut and then donates $30 million to the Congressional Leadership Fund, a Republican super PAC, surely anyone can recognize this as a quid pro quo, even if they don’t know Latin.

Whether you think the campaign to get Alex Jones kicked off of Twitter was yet another step down the slippery slope of censorship or a righteous act of voting with one’s wallet, we can all agree that it was a legitimate action under the rules of capitalism. As consumers we feel a small measure of relief in our acts of political expression, and the companies that are the target of our ire gain a new customer for every one they lose. It’s a win-win.

But amazingly, despite all that’s transpired in the past 30 years, I still can’t muster that same degree of clear-eyed cynicism when it comes to our lawmakers.

Although I committed to contribute to Collins’ Democratic opponent should she vote to confirm Kavanaugh, I took no satisfaction in that pledge. I did it because as a parent, I know that when reason fails — when your exhausted, cranky, petulant, irrational, hungry or just plain too-young-to-understand child doesn’t behave as she should — you impose “consequences.”

I don’t want to treat our leaders like children, and I don’t want to go tit for tat in a battle that should be waged with ethics and reason, not with cash.

We don’t yet know how she will vote, though we ought to give her some credit for using her power as one of the Republican Party’s more moderate members to insist on next Monday’s hearing. Should she end up opposing Kavanaugh’s confirmation, we will never know if her decision was based on the strength of the campaign to oppose her, or on her belief that in light of the sexual assault allegations against him, perhaps Kavanaugh himself should experience some consequences.

What the Senate does, how the Supreme Court rules — these are actions that have an enormous impact on whether individuals live or die tomorrow, on whether our planet will be able to sustain human life a few centuries from now. Theirs are the actions with real consequences. And until we get money entirely out of politics via strict contribution limits and a drastically shortened campaign process, our so-called “democracy” will become ever more of a lose-lose proposition.