I moved to the Boston area in 1997, exactly 50 years after Frank Capra’s “It’s a Wonderful Life” was released. Most years since, my husband Rob and I have made a ritual of watching it on the big screen at the Brattle Theater, projected in silvery 35 mm reels to a packed crowd.

Every year I overhear someone exclaiming they can’t believe they’ve never seen the film before. Others — including Rob and me — sigh with familiar anticipation before the Liberty Bell’s trademark chime at the opening of the film, and applaud with tearful pleasure at the end.

We “know” this film. We reference it throughout the year. (And we wrestle with its problematic aspects, its casual racism and misogyny.) But the reason we return to the theater each December is because like any worthwhile ritual, from religious holidays to New Year’s resolutions, we recognize that the movie is about something different each time we come back to it.

When Rob deployed to the Middle East with the Army Reserves in 2003, it was a war movie whose climax was Harry Bailey’s Congressional Medal of Honor, made possible by brother George’s (Jimmy Stewart) childhood heroics that had saved Harry’s (Todd Karns) life.

When we were struggling through infertility, it was a movie about the work of building a family. When George Bailey asks his wife with joyful incredulity, “Mary, you on the nest?” we yearned for a moment like that. (We got one.) Later in the movie, when he asks in depressive frustration, “Why did we have all these kids, anyway?” we worried we’d one day lose sight of our miracle. (We have our moments, but we haven’t.)

We watch it both knowing what to expect and with no idea whatsoever what will leap from the story this time.

When we were renovating our house, the movie became about the meaning of home, how we make it over time in ways both physical and emotional. It also became a little bit about my resentment of Mary’s cheerful can-do spirit, as she hung wallpaper and made dinner and volunteered for the USO and raised four babies without busting a single curl.

When the economy was collapsing in 2008, it was about power and corruption and checks and balances. “Potter isn’t selling, Potter’s buying,” George tells his anxious Bailey Bros. Building & Loan shareholders as the Great Depression dawns. “And why? Because we’re panicky and he’s not.”

The month after the 2016 election, I was hyper-aware of the dangerous dystopia of the imagined “Pottersville,” and how much courage, kindness and community connection would be required if America was to remain anything approaching “Bedford Falls.”

And this September, after my father died, the movie became about grief. Suddenly, the whole story was an arc anchored at one end in young George, looking up at the sign that hangs in Mr. Gower’s drugstore in Bedford Falls: “Ask Dad: He Knows,” and at the other end, in adult George sweating, drunk and hand-wringing on a barstool as he prays to “Dear Father in heaven” to show him the way.

Returning to Harvard Square’s cinematic landmark each year is a tradition for Rob and me. But more than that, it’s a singular ritual, imbued with deep meaning. Rob and I would never watch “It’s a Wonderful Life” on television. We don’t have it purchased or saved on our devices for long car or plane trips. We watch it once a year, from beginning to end, in the soft and shabby seats of the iconic movie house. We watch it both knowing what to expect and with no idea whatsoever what will leap from the story this time.

What will we see in our mid-40s that we didn’t know to look for in our mid-20s? We leave the theater each year as confident in our new understanding of what the film is actually about, as we are sure we’ll find a new hidden thread next year.

Research connects ritual behaviors with lower anxiety levels when embarking on a high-pressure task or activity, like the baseball player who crosses himself and murmurs a prayer before stepping to the plate, or the musician who zips through a prescribed set of easy scales before beginning a performance.

The month of December is, for many, one long high-pressure assignment, taxing our brains with the emotional and logistical complexities of the holiday season. As many as 88% of Americans report feeling more stressed than usual during the most wonderful time of the year.

... we relax into ritual during the holiday season -- in part because we need to relax into something

And so we relax into ritual during the holiday season — in part because we need to relax into something — until finally, on January 1, we perform the final ritual of flipping the calendar into a new year, and this year, a new decade.

This collective ritual moment, like Rob’s and my annual viewing of “It’s a Wonderful Life,” is different for each of us each time we practice it. For that reason alone, it’s worth paying attention to, worth noticing in its continuities and discrepancies over time.

Because when we make space to reflect on who we are each time we enter into our most cherished rituals, we become George Bailey. We hope to find ourselves as the most awake and inspired version of this character, the George Bailey who has come back to his wonderful life, whooping and waving as he splashes and sprints past the Bijou Theater on his way home to who-knows-who-cares-what future.

Fortunately for George, joy, generosity and community support were waiting for him in his drafty old house. Any of us should be as lucky to have any amount of those feelings at the end of this month, year and decade — even a small cup of kindness for auld lang syne (that’s “times gone by”) would do. 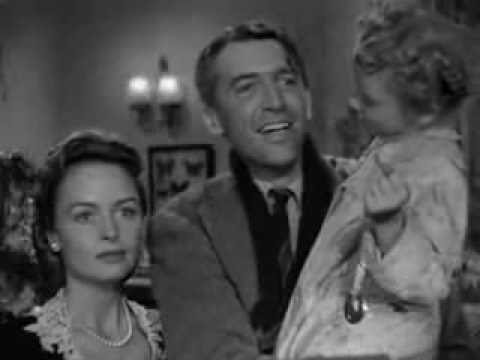