This was all foreordained: the violence, the disregard for justice and equality, the chaos, the ravages of a plague ignored, the moral and financial bankruptcy. As we watch American cities burn, as we watch police officers brutalizing protestors and journalists and bystanders, as we watch the COVID-19 death toll zoom past 100,000, and unemployment top 40 million, we cannot tell ourselves that any of this comes as a surprise.

The man who blustered and lied his way into the White House, with the support of foreign agents, the acquiescence of his own party and the complicity of the media, told us this was going to happen.

He did so not by confronting his constituents with some difficult truth, but by uttering yet another grandiose and menacing lie. “This American carnage stops right here and stops right now,” the new president declared during his inauguration, as a light rain fell upon the crowd. What he meant (but could not say) was that he would initiate a new era of American carnage.

This is how Trump often communicates: in prophecies so nakedly fraudulent as to be negatively predictive. When he brags that his administration has coronavirus “under control” and that the virus will “magically disappear” you can bet the house the opposite is true. The phrase “I alone can fix it” — translated from Trumpian dialect into standard English — emerges as “I alone will break it."

As much as the mainstream media has worked to expose his mendacity, they have been unable to resist amplifying his misinformation. The problem is vexingly obvious: We have never endured a public servant — let alone a president — who is such shameless liar and brazen troll.

What Trump and his enablers fear most isn’t young people raging in the streets. They fear an organized, disciplined electoral opposition.

Elsewhere, though, Trump has been shockingly candid about his intentions.

When he introduced himself as a candidate by labeling Mexicans as rapists, he was foretelling the day when his administration would start tearing refugee families apart and throwing children in cages. His appeals to Russia for help during the 2016 election were but a prelude to his attempted extortion of Ukraine. His relentless bleating about rigged elections is a sure sign of his intention to corrupt the one coming up.

The most chilling of Trump’s statements — given the violent images in which we are awash — were the sadistic fantasies that he served up at his rallies, as red meat to supporters who felt starved of power.

Over and over, Trump talked about punching protestors. He later pivoted from vigilante justice to exhortations of police brutality. “Please, don’t be too nice,” he told cops, in 2017, openly encouraging them to rough up suspects.

His rhetoric has consequences. The most unhinged of his partisans have gone so far as to cite his bloodthirsty musings as a motive for mass shootings and bombings.

As president, Trump has converted his hateful musings into dangerous policies. He has accelerated the militarization of law enforcement, and stripped away oversight.

Jeff Sessions, his first attorney general, announced three years ago that the Justice Department would no longer investigate accusations of police misconduct, shutting down the robust police reforms put in place by the Obama administration.

Just last October, the president of the Minneapolis Police Union, an alleged white supremacist named Bob Kroll, showed up at a Trump rally to declare that “the Obama administration and the handcuffing and oppression of police was despicable.” He thanked the president for “letting the cops do their job, put the handcuffs on the criminals instead of us.”

What’s happening in the streets of American cities — from the killing of African-American men to the alleged macing of a child — isn’t some accident of history. Cops feel empowered to brutalize protestors precisely because Trump fosters their brutality.

He also has spent four years calling reporters “the enemy of the people.” Is anyone surprised that we’re now seeing cops in riot gear shooting rubber bullets at journalists, bloodying them, blinding them, arresting them on live TV?

Is anyone surprised that white supremacist agitators who love the president and hope to discredit the protests are attempting to infiltrate them?

Is anyone surprised that Russian intelligence operatives are seizing this moment of national trauma to further racial divisions that they believe will tear at the national fabric and thus empower the president?

It’s horrible enough that we’ve reached this juncture, and quite possible that things will get worse. Trump, after all, openly dreams of being the kind of autocrat who can order “his” military to attack those of his constituents whom he considers enemies. Putin, and America’s own white supremacists, would rejoice.

But there are already signs that Trump’s response to this viral violence will mirror his response to COVID-19. That is, he’ll seek to exploit the tragedy for political gain, wait for the peak to pass, then claim victory and retreat into his bubble of Fox News propagandists, cultish rallies and golf courses. It’s not just that the lights in the White House have gone dark. We have an American president afraid to show his face in public.

The question for the rest of us is whether we can convert our rage and anguish into productive political action. “Now is the time to plot, plan, strategize, organize, and mobilize,” in the words of the rapper and activist Killer Mike. 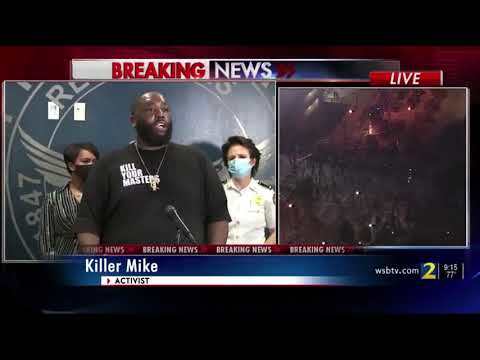 This is especially important given Trump’s blatant efforts to undermine the election. Ask yourself this: How will this president behave if the polls show him losing badly in, say, October?

What Trump and his enablers fear most isn’t young people raging in the streets. They fear an organized, disciplined electoral opposition. Having delivered the carnage he vowed to vanquish, our inciter-in-chief is counting on voter suppression and apathy, along with the electoral college, to get him to 270.

Those of us gazing at these images of carnage with sorrow and horror, or suffering as part of it, should be asking one question: What can I do, right now and in the coming months, to help vote this regime out of office?