Do you believe that every president should make a commitment, unequivocally and resolutely, to the peaceful transfer of power?

This was the question put to Amy Coney Barrett by Senator Cory Booker last week, during her absurdist confirmation hearings.

A federal judge seeking a lifetime appointment to the Supreme Court — particularly one who wraps herself in the dewy Constitutional reverence of an originalist -- should be able to answer this question with a simple yes. After all, a president’s refusal to commit to a peaceful transfer of power is not only a clear violation of the Constitution, but a renunciation of democracy itself.

Barrett chose instead to dodge the question, by misrepresenting the issue as a “political controversy.” Ominously, she also refused to say if she would recuse herself from any case involving the fate of the 2020 election.

In a morally sane universe, these evasions alone would be disqualifying.

But Barrett was sitting in a Senate hearing ruled by the GOP, a minority party whose legislative agenda has become so loathsome to most voters that Republicans have had to remake the federal judiciary to advance that agenda.

In a morally sane universe, [Amy Coney Barrett's] evasions alone would be disqualifying.

The most obvious example of this is the Affordable Care Act, which more than 60 percent of Americans now support, with 80 percent favoring coverage for pre-existing conditions.

Barrett, naturally, refused to say how she would rule on the ACA challenge that the Court will hear less than a week after the election. But her previous rulings make it obvious why Trump nominated her: to invalidate an increasingly popular law congressional Republicans have failed to repeal for a decade.

But the GOP effort to radicalize the judiciary goes much further than any one law. It is a sweeping campaign funded by tens of millions of dollars in dark money. As Senator Sheldon Whitehouse patiently explained, this scheme aims to create a federal bench that will favor corporate interests over public ones, by striking down government regulation on polluters, restricting labor and voting rights and fostering political corruption. 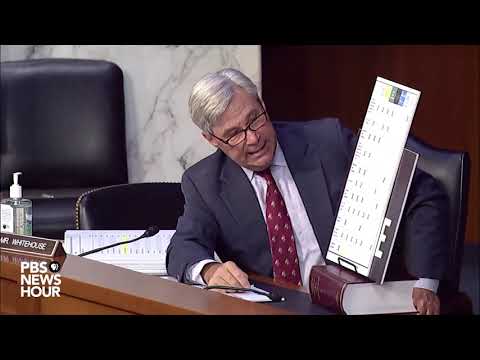 While Senate Republicans have refused to vote on the hundreds of bills passed by the House, they have rubber-stamped a dizzying array of judicial nominees, some of them manifestly unqualified.

The result is a federal judiciary that looks and thinks nothing like the American population.

After all, the vast majority of our citizens favor women’s reproductive rights and sensible gun control measures and LGBT rights and efforts to address climate change, including rejoining the Paris Climate Accord. Most Americans also want voting to be made easier and fairer, by eliminating gerrymandering and voter suppression efforts, and by getting corporate money out of politics.

The wealthy donors who underwrite the Republican party know that they cannot win these battles in the court of public opinion, nor in a legislative body that is increasingly representative of these views.

America will not recover from Trumpism until all three branches of government are cleansed of dark money and its toxic corruption.

And thus, they have turned to the judiciary, packing the courts with ideological extremists nominated by a reviled president who lost the popular vote, and installed by a Senate that could never exist in a truly representative democracy.

When the history of the Trump regime is written, in fact, the confirmation of Amy Coney Barrett will be properly understood as the desperate culmination of a long con to thwart the will of the American people, and to desecrate the Constitutional values touted by self-professed originalists such as Barrett herself.

If the will of the people is expressed on November 3, and Trump and his minions are tossed from office, the new Democratic majority should take whatever measures are necessary to, as Whitehouse put it, “restore a court that is demonstrably not the organ of big special interests.”

America will not recover from Trumpism until all three branches of government are cleansed of dark money and its toxic corruption.