Endless Thread is back from a break with a special series called "Infectious: The Strange Past and Surprising Present of Vaccines — and Anti-Vaxxers." This is Part One. Find Part Two here.

Part One of this series started, as per usual, on Reddit:

Grinding up smallpox scabs and blowing them up people's noses sounds pretty desperate. But it was — at least as far as smallpox is concerned — a desperate era. If you’ve never seen smallpox, use the Google machine at your own risk. Thousands of painful looking pustules cover the body. It looks a little like someone's skin has been turned into bubble wrap.

According to Dr. Rene Najera, an epidemiologist and editor of “The History of Vaccines,” people at that time were helpless to prevent smallpox. "There used to be a time when we got infectious diseases and there was nothing we could do other than just live through them or die."

Gareth Williams, professor emeritus of medicine at the University of Bristol in the U.K., describes a smallpox outbreak like this:

There was widespread panic. And 90% of its victims were kids under the age of five, so it had a reputation as being the "slayer of innocents." And if you got it and you lived you weren’t necessarily that lucky because about a third of the survivors were badly scarred. They could be hideously disfigured. There are plenty of cases on record of people who survived smallpox and then killed themselves because they couldn’t bear to look in the mirror.

So it isn't hard to imagine the lengths people would go to avoid the disease. No one knows exactly where or when humans first attempted to inoculate against disease, but Dr. Najera has a guess:

My personal guess is that somebody died of smallpox out in the middle of the Gobi Desert. Somebody came upon their body, and the body was desiccated, and they breathed in the dust from the body. And then that person went into some place where there were massive amounts of smallpox, and they didn't get sick! And they said to themselves, ‘Hmm I wonder if it was because I was somehow protected by the spirit, the dust, the whatever came off of that body that had smallpox.’

And, perhaps, this is how the ancient Chinese practice of drying out smallpox scabs, grinding them into a powder, and snorting them up people's noses developed. "Much like cocaine, I guess, without the euphoria," says Dr. Najera. This practice does, in fact, have a more scientific name: "variolation." And, as it turns out, it was practiced in a lot of different cultures.

A ship from the Caribbean called the HMS Seahorse arrived in Massachusetts in 1721 and unleashed a brutal smallpox epidemic on the colony. Over half the city of Boston was hit with the virus and people were dying left and right.

But Cotton Mather, a well-known Puritan minister, got an idea after noticing a big scar on the arm of an enslaved person known as Onesimus. "Mr. Mather said, 'what is that mark?' And Onesimus said, 'they gave us the smallpox so we wouldn't get the smallpox.' And that was very interesting to [Mather]," says Dr. Najera.

Mather found one doctor in Boston willing to try this risky experiment: Zabdiel Boylston. Though, you probably won't be shocked to learn that not a lot of folks volunteered out of the gate. So, instead, they tried it on enslaved people who hadn’t already been variolated back in Africa and also on their own children.

Once word got out about their experiment, people were not pleased. Resistance to variolation was spurred on by a group called The Society of Physicians Anti-Inoculators, led by Dr. William Douglass — the only official M.D. in Boston at the time. Someone threw a bomb into Mather’s house with a note that read:

Cotton Mather, you dog, damn you! I’ll inoculate you with this; with a pox to you!

Mather described the outrage to his experiment in a letter:

I never saw the Devil so let loose upon any occasion. The people who made the loudest Cry…had a very Satanic Fury acting them…. Their common Way was to rail and to rave, and to wish Death or other Mischiefs, to them that practis’d, or favour’d this devilish Invention.

Mather and Boylston’s experiment was largely successful. Some people did die in the process, but far more survived than would have if they had let smallpox run its course. Their experiment became the first numbers-supported clinical trial in Western medical history. It was so compelling that the British government mandated that everyone in the colonies get variolated.

"The people who made the loudest cry ... had a very satanic fury acting them."

Puritan minister Cotton Mather, responding to criticism in a letter

A mandatory policy from the crown to the colonies did not go over very well in pre-Revolutionary War Boston. Dr. Najera says this is a crucial plot point in the story of vaccination because you see the roots of two familiar ideas:

The government is not going to tell me what to do with my own body! And ... saying, 'No, no, there's no evidence for this. He got the idea from a slave, what do they know?'

A Vaccine Is Born

Let's jump now to the end of the 1700s, to a field in the English countryside populated by a physician named Edward Jenner and a bunch of milkmaids. Dr. Najera says Jenner noticed something about these milkmaids:

He noticed that they were pretty! He notes this in his notes ... So he gets inquisitive. And he notices that they all get this disease from the cows called cowpox. But it's not bad at all, maybe a fever [and] a little bit of a rash on the arms ... and everybody who had cowpox did not develop smallpox — light bulb moment!

Jenner tests his theory successfully and, even without understanding what was happening on a microbiological level, creates the world's first vaccine: the smallpox vaccine. But just like Cotton Mather’s experiment decades earlier, Dr. Jenner got some blow-back. "If you look at some of the cartoons at the time, they had people turning into cows as warnings of what could happen if you [got the] vaccine," says Dr. Najera.

Luckily, the proof of people successfully being immunized from smallpox was more convincing in the long run than the fear of turning into a cow. By the turn of the 20th century, there were other vaccines in use for rabies, typhoid, and cholera.

Some of the reaction to vaccines today can be characterized by a popular line from the movie "Jurassic Park" (1993): 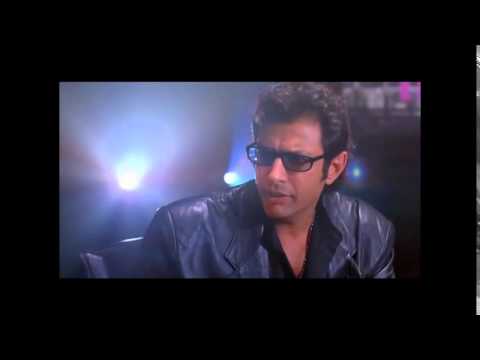 If every era of innovation in disease prevention has a negative reaction, professor Elena Conis says today’s reaction has roots in a much more recent past. Conis is a professor at the University of California, Berkeley, specializing in the history of medicine. To fully understand the anti-vaccine sentiment in America today, Conis says we need to look to the 1960s and ‘70s:

The '60s and '70s saw the rise of the counterculture and social movements that questioned authority ... and the kind of technological optimism driving the country at the time. One of these movements was the feminist movement. And an outgrowth of that movement was the women's health movement ... And they started asking questions that, in time, they ended up applying to the experiences of their children as those children got vaccinated.

While today's anti-vaccine movement may have roots in the feminist movement of the mid-20th century, Conis says today's reaction includes people from all across the political spectrum. "It's part of what makes this whole issue so incredibly challenging."

"The Angel of Death: The Story of Smallpox"