Bruce Holsinger has won prizes for his nonfiction books on the medieval period from the Modern Language Association and the Medieval Academy of America.

He's also a professor in the English department at the University of Virginia.

But when he decided to write a fiction book set in the middle ages, he discovered how much he didn't know.

Poets Geoffrey Chaucer and John Gower are caught up in the search for a mysterious book that may or may not predict the death of the king. 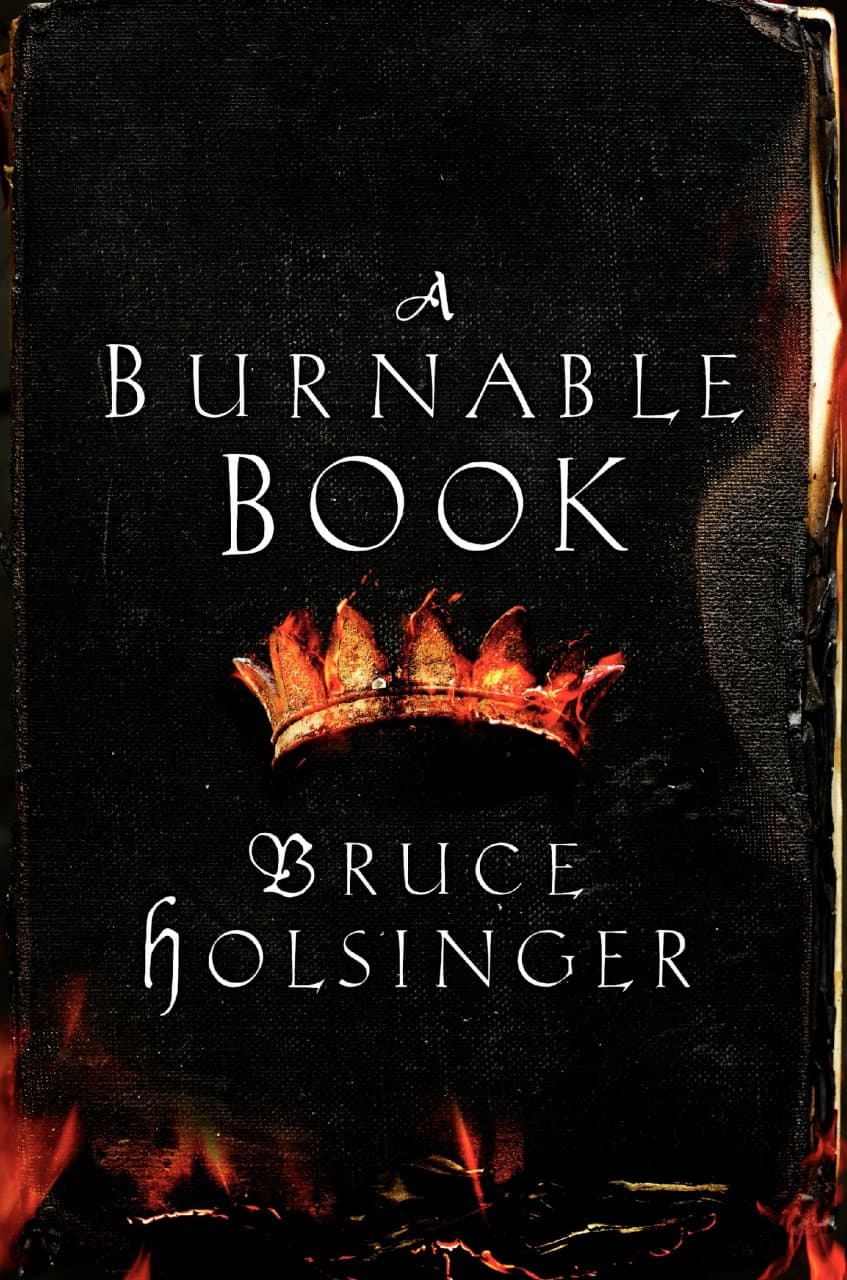 If you build your own life around the secret lives of others, if you erect your house on the corrupt foundations of theirs, you soon come to regard all useful knowledge as your due. Information becomes your entitlement. You pay handsomely for it; you use it selectively and well. If you aren’t exactly trusted in certain circles, you are respected, and your name carries a certain weight. You are rarely surprised, and never deceived.

Yet there may come a time when your knowledge will betray you. A time when you will find even the brightest certainties—of friendship, of family, even of faith—dimming into shadows of bewilderment. When the light fails and belief fades into nothingness, and the season of your darkest ignorance begins.

Mine fell in the eighth year of Richard’s reign, over that span of weeks separating the sobriety of Lent from the revelry of St. Dunstan’s Day. London often treats the passing of winter into spring with cold indifference. That year was no different. February had been an unforgiving month, March worse, and as the city scraped along toward April the air seemed to grow only more bitter, the sky more gray, the rain more penetrating as it lifted every hint of warmth from surfaces of timber and stone.

At street level Monksblood’s stood open to the weather, a brick wedged beneath the alley door. I leaned in and gave a nod to the keeper. He tossed me a jar. At the foot of the stairs sat his daughter, a slight thing of about eight. With her foot resting on the next cask, she angled my jar beneath the tap and carefully turned the bronze spigot. I dropped a few pennies in her little palm. A wan smile, tired eyes bright for a moment beneath her shining brow, then she looked past me and up the stairs, waiting for her father’s next fish.

With the sour ale on my tongue I surveyed the undercroft tavern, lit weakly by a row of lanterns dangling from heavy beams. The tables were nearly empty, just two groups of men clustered along the hearth. Masons, fresh from work on the bridge. I got a few sullen looks. Steam rising from damp clothes, the muffled clatter of boots overhead.

In the far corner my friend sat alone, frowning into his jar as his finger traced a slow arc around its mouth. He seemed coiled on the bench, his brow knit, his eyes narrowed in concentration, the whole of him tensed against some unspoken thought.

“Geoffrey,” I said, and moved forward.

Half-turning with a start, he rose, his face blossoming into a smile. “Mon ami.” He spread his hands.

As my arms wrapped his frame I felt the familiar surge of anticipation: for court gossip, for poetic banter, for news of mutual acquaintances. Yet beneath the thin coat I also felt ribs, hard against tightened skin. Chaucer had lost a couple of stone that winter; there was less to him since his latest return from abroad, and his unfashionable surcoat, of undyed wool cut simply with straight sleeves, lent an almost rural aspect to his bearing. Normally he would dress like a bit of a fop. I wondered what explained the change.

For a while we just drank, saying nothing, two hounds sniffing around after a long separation.

Eventually he leaned over the board. “How has it been, John? You know...”

I looked away. “Let’s not bleed that wound, Geoff.”

He let that hang, then touched my elbow. “I hope it’s started to heal, at least.”

“I had her things removed and sold at Candlemas—most of them.”

Candlemas: purification, purging, the scouring of the soul and the larder. I thought, as I hadn’t in weeks, of Sarah’s prayerbook, its margins and flyleaves full of her jottings. It was one of the few of her possessions I had kept.

Chaucer moved his hand away.

There was a long silence, then Chaucer sighed, tapped his fingers. “John, I need a small favor.”

“I’ve heard it was in the hands of one of Lancaster’s hermits.”

I watched his eyes. “Why can’t you get it for yourself?”

“Because I don’t know who has it, or where it is at the moment.”

“And who does know?”

He raised his chin, his jaw tight. I knew that look. “Katherine Swynford, perhaps. If a flea dies in Lancaster’s household she’ll have heard about it. Ask her.”

“She’s your sister-in-law, Geoff.” I felt a twinge of misgiving. However innocent on its face, no request from Chaucer was ever straightforward. “Why not ask her yourself?”

“She and Philippa are inseparable. Katherine won’t see me.”

“So you’re asking me to approach her?”

He took a small sip.

“How to put it?” He pretended to search for words, his hands flitting about on the table.

“This job needs a subterranean man, John. A man who knows this city like the lines in his knuckles, its secrets and surprises. All those shadowed corners and blind alleyways where you do your nasty work.”

I gazed fondly at him, thinking of Simon, and so much else. It was one of the peculiarities of our intimacy that Chaucer seemed to appreciate talents no one else would value in a friend.

Here comes John Gower, it was murmured at Westminster and the Guildhall; hide your ledgers. Hide your thoughts. For knowledge is currency. It can be traded and it can be banked, and more secretly than money. The French have a word for informers: chanteurs, and information is a song of sorts. A melody poured in the ears of its eager recipients, every note a hidden vice, a high crime, a deadly sin. Or some kind of illicit antiphon, its verses whispered among opposed choirs of the living and the dead.

We live in a hypocritical age. An age that sees bishops preaching abstinence while running whores. Pardoners peddling indulgences while seducing wives. Earls pledging fealty while plotting treason. Hypocrites, all of them, and my trade is the bane of hypocrisy, its worth far outweighing its perversion. I practice the purest form of truthtelling. Quite profitably, too. The second son of a moderately wealthy knight has some choices: the law, the royal bureaucracy, Oxford or Cambridge, the life of a monk or a priest. Yet I would rather have trapped grayling in the Severn for a living than taken holy orders, and it was clear that my poetry would never see the lavishments from patrons that Chaucer’s increasingly enjoyed. Yet I’ll never forget the thrill I felt when that first coin of another man’s vice fell into my lap, and I realized what I had—and how to use it. Since then I have become a trader in information, a seller of suspicion, a purveyor of foibles and the hidden things of private life. I work alone and always have, without the trappings of craft and creed. John Gower. A guild of one.

“You can’t be direct with her about it,” Chaucer was saying. “This is a woman who takes the biggest cock in the realm between her legs. She’s given Lancaster three bastards at last count—or is it four?” He waited, gauging my reaction.

“What is this book, Geoff? What does it look like? What’s in it?”

He stared again at a spot on the wall, his gaze unfocused and vague. “To be honest with you, John, I don’t know. What I do know is that this book could hurt me.”He blinked and looked at some spot on the wattle behind me.

Then, in a last whisper of French, “It could cost me my life.”

Our eyes locked, and I wondered in that instant, as I would so often in the weeks to come, what price such a book might extract from my oldest friend. He broke the tension with one of his elvish smiles. “If you can do this for me, John, get me this book, I’ll be greatly in your debt.”

As you are so deeply in mine, he did not say; nor did he need to, and in his position neither would I. I left Monksblood’s that morning bound to perform this ‘small favor,’ as Chaucer had called it, for the one man in all the world I could never refuse. The man who knew my own darkest song.