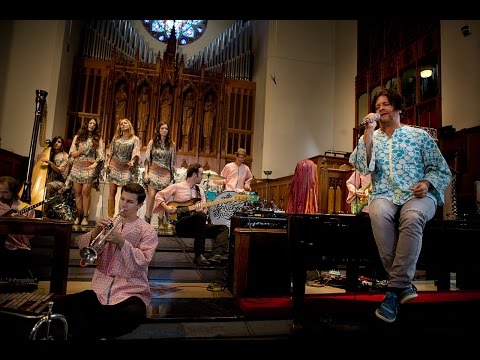 The Polyphonic Spree, a choral rock band out of Dallas, Texas, has been thrilling audiences with its live performances for over a decade.

They're currently wrapping up a summer tour, with shows remaining over the next week in Washington, D.C., North Carolina, Georgia and Louisiana. The band's music has also been used for commercials, the television show "Scrubs" and the film "The Eternal Sunshine of the Spotless Mind."

When the band made a stop in in Boston earlier this week, we got a taste of their stage show and Here & Now's Robin Young caught up with band founder Tim DeLaughter, who is one of the band's only consistent members over its lifetime. Today, it fluctuates between 17 and 18 members.

"I'm sure I could do four people and a sampler and keyboards and create a lot of this stuff, but that's not the Polyphonic Spree," he said. "You know, people have been wanting me to downsize this group from the get-go, but this is it, folks."

Even DeLaughter has been surprised by the band's success over the past almost 15 years.

"It was an experiment," he explained. "I had no idea it was gonna be something that would be going on this long, and before I knew it I'm writing another record and touring all over the world. There have been so many wonderful things that have happened."

Songs In This Segment

“Light & Day/Reach for the Sun”

“What Would You Do”