A Chilean feminist anthem is inspiring women to decry gender violence and rape with pop-up performances around the world.

The song — “Un violador en tu camino” ("A Rapist in Your Path") — was created by Chilean art collective Lastesis to highlight gender-based violence in the country. In Chile, 42 cases of sexual violence are reported to the police every day, according to the Chilean Network Against Violence Against Women.

Wearing blindfolds, women sing the powerful lyrics atop an electric beat: “Y la culpa no era mía / ni dónde estaba / ni cómo vestía./ El violador eres tú.” (And the fault was not mine / nor where I was / nor how I was dressed. / The rapist is you.) 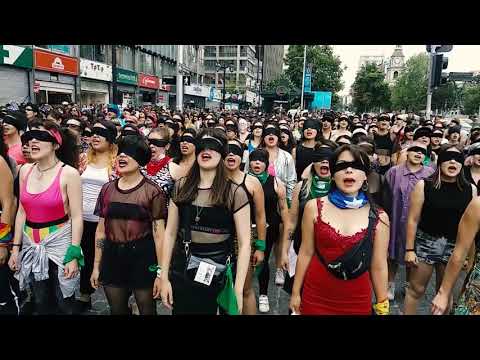 Spontaneous performances of the song have popped up in Mexico, Venezuela, France, Spain, India and the U.K. In the U.S., the song has inspired Velu Ochoa and fellow organizers to come together for an upcoming performance in the nation’s capital.

The day after she heard the song for the first time, a friend invited her to join a performance of the anthem in Washington, D.C.

To bring awareness and call for a stop to gender violence, Ochoa and seven fellow organizers have formed a collective called the Purple Movement.

The collective of Chilean and Colombian women aims to both maintain the original message from Chile and share it with an international audience by performing in both Spanish and English.

Though the Purple Movement only started planning the Washington, D.C., performance two weeks ago, Ochoa says more than 300 people have joined their Facebook group.

“We as women, we are always considered at fault when it comes to someone abusing us or assaulting us,” she says. “What Lastesis did was provide a platform of expression through a song that summarizes the feeling and the experience that every one of us goes through since childhood.”

Critics of the song say some of its performers are “crying wolf,” Ochoa says. But she doesn’t think that’s the case.

Even women who have not experienced gender violence themselves want to show they support the song’s message, she says — because all women have a cousin, sister or mother who has been abused.

“We are women — ultimately, beyond being born in a different country, beyond having a different political view,” she says. “We are all women and we all feel the same pain.”

Cristina Kim produced this story and edited it for broadcast with Todd Mundt. Allison Hagan adapted it for the web.