Oscar-winning composer Randy Newman is known for his songs from Pixar’s “Toy Story” movies and scores for films such as “Marriage Story.”

Now, he’s turned his talents to writing a song about social distancing and personal hygiene in the age of the coronavirus pandemic. Proceeds from his new song “Stay Away” will benefit the Ellis Marsalis Center for Music, which supports young musicians in New Orleans' 9th Ward.

Newman wrote the song after public radio station KPCC asked him to say some words about social distancing, and in true Newman fashion, he decided to write a song about it.

“I had an idea for something. The music and the stay away came into my head, which isn't much of an idea, but that was it,” he says. “So I wrote a song and it turned out alright.” 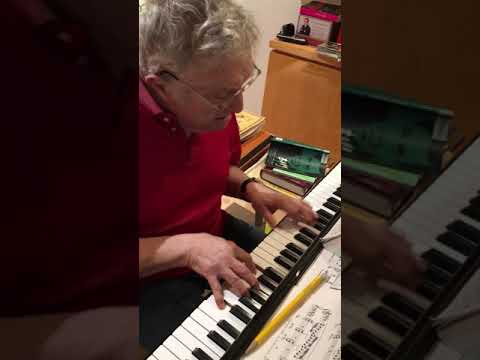 Newman has been nominated for 22 Academy Awards, winning twice for the 2002 song “If I Didn’t Have You” from “Monsters, Inc.” and in 2011 for “We Belong Together” from “Toy Story 3.” Even though the pandemic has all but shut down film production, Newman says he’s not concerned about Hollywood crumbling due to this crisis, especially in the age of streaming.

“I think Hollywood will be alright,” he says. “I mean, at the height of the Depression, the movie business was doing fine. It'd be one of the last industries to really get destroyed by this thing I think.”

Newman says he already has an idea for another song. This one about President Trump.

“I don't know whether I'll do it, but I'll see if I can get a song out of it,” he says. “It's a little lumpy now. Seems like as I get older, things come a little harder in some ways.”

The song tells the story of an “orange man coming” to chase people’s blues away. Newman says he might not finish it because it’s fueled by something different than the rest of his music.

“I can't stand him, and I've never written something that was impelled by hate the way this one is,” he says. “And I just don't want that to stick out too much.”

Emiko Tamagawa produced and edited this interview for broadcast with Tinku Ray. Samantha Raphelson adapted it for the web.